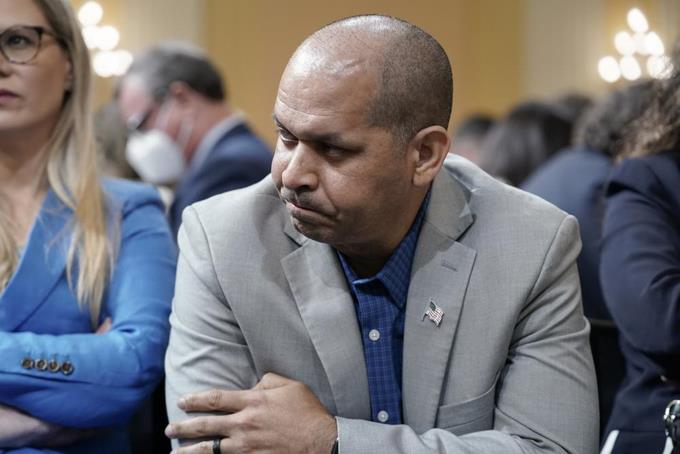 Dominican who defended Capitolio still suffers after the assault

Among the many insults he received on January 6, 2021 at the gates of the Capitol, in Washington DC, Sgt. Aquilino Gonell he remembers hearing cries that he was not an American, that he was an immigrant, and that he was a traitor.

A year and a half after the violent assault On behalf of thousands of supporters of former President Donald Trump, Gonell, a Dominican-born Capitol Police sergeant, says he regrets that an immigrant like him speaks out while politicians and others born in the United States do not.

“It is sad that I, as an immigrant, take things more seriously than the same people who swore to defend the country and the Constitution and those people who were born here have not had the courage to take a step forward, to account for what know and say who was involved (in the assault) without having to get a citation,” said Gonell, 43, during a telephone interview with the AP.

Trump supporters who stormed the capitol They violently did so in an attempt to stop the certification of the electoral victory of Democrat Joe Biden in 2020.

Many Republican politicians — including those who condemned Trump and the violence at the time — have rejected calls for an independent commission to investigate. They assure that the Democrats, through the Committee of January 6 of the Lower House, take advantage of the assault to politicize the issue, gain supporters and approve electoral reforms that they consider “radical”.

As the January 6 Committee unearths details of that day in televised hearings, Gonell has become one of the most recognizable figures in the violent episode, often sitting in the front row of seats during hearings. . He has denounced the assault in media interviews, on Twitter and in Congress last year, when he described the brutal, “medieval”-style altercations he faced while trying to defend the Capitol.

He has been awarded the Congressional Gold Medal and has been included in the list of “Great Immigrants” of the Carnegie Corporation, but he still deals with pain and physical problems, as a result of the blows he received that day, in addition to psychological problems, he says. “Sometimes I get to work (at the Capitol) and spend several minutes in my car, thinking about whether or not to get in,” he said. “To enter I take the long way. I avoid the entrance where everything happened.”

Trump has not condemned the assault and says his election result should be annulled. The former president has falsely claimed that there was electoral fraud in the 2020 elections, something that has been denied by his own attorney general, the courts, and state and local officials. Trump’s statements on voter fraud were what motivated the assault on January 6, 2021.

More than 840 people have been charged with federal crimes related to the assault. More than 330 have pleaded guilty, mostly to misdemeanors. Of the more than 200 who have been sentenced, about 100 were sentenced to prison.

Gonell has testified in some of those court cases and is collaborating with authorities on investigations.

The Dominican was born in Guayubin, province of Monte Cristi. His father was the first to go to New York in search of a better life, followed by his mother and his older brother. Gonell arrived in 1992, when he was 12 years old. In 1999 he joined the army and was sent to the war in Iraq, a country where he served from 2004 to 2005. He joined the Capitol Police Department in 2006.

On January 6, 2021, on the west side of the Capitol, he spent hours trying to prevent the wave of assailants from entering the building, grappling and fighting until he bled. He was hit with an American flag pole and a bat, he said. He fell to the ground and was dragged by a group that beat him while insulting him. Last year he told congressmen that he felt how he was losing oxygen as he was crushed by assailants. In his testimony he said that at the time he thought, “This is how I’m going to die, defending this entrance.”

He required several operations on his right foot and left shoulder, which he cannot currently rotate.

More than 100 police officers were injured in the attack and two committed suicide over the next few days. A third collapsed and died after the altercations but a forensic expert determined that he died of natural causes.

Even though Gonell passed an exam to be a lieutenant, doctors have recommended that leave the Capitol Police due to his injuries. “Instead of planning a promotion, I’m planning my retirement,” lamented the Hispanic, who has US citizenship and is updating his resume to find another job. He is also looking for a publishing house to publish a book that he is writing about his life and what happened on January 6, 2021.

“Not many people appreciate the effort we made that day,” assured the Dominican, who added that many Republican politicians who see him at the Capitol avoid him, do not greet him and do not thank him for anything.

What does Gonell expect now? “Let justice be done,” he said. “The people who attacked me, and who attacked the other police officer, who coordinated or supported the assailants, who are responsible and accountable.”