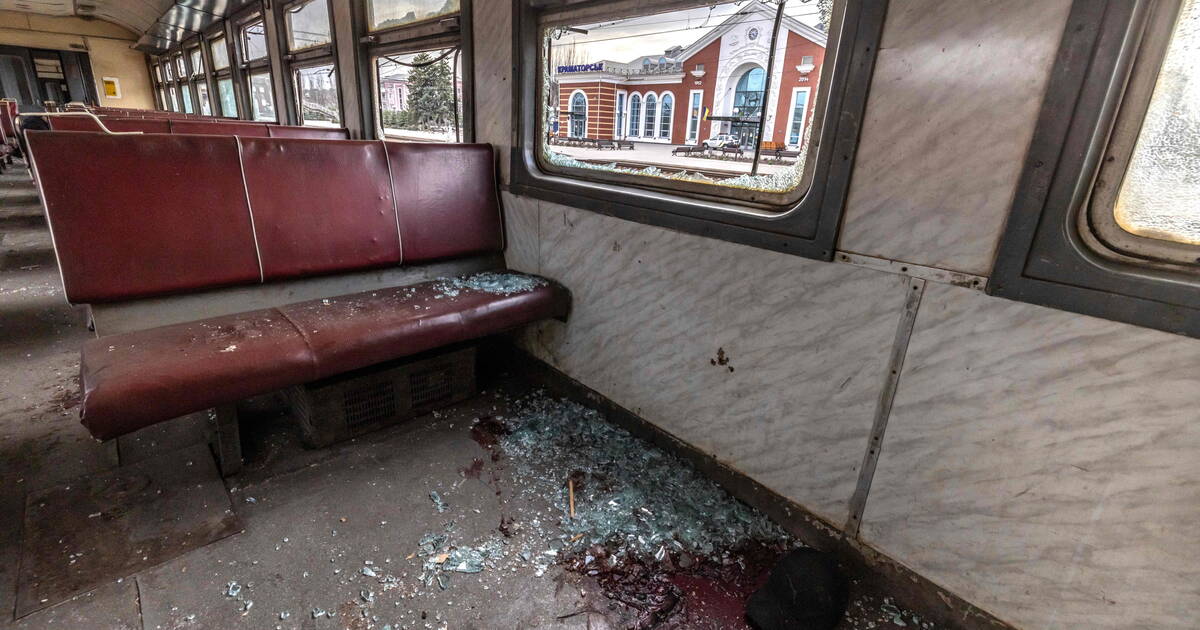 War between Ukraine and Russiadossier

Russia claims that the nature of the missile used and its serial number prove that the strike was the work of the Ukrainian army. Arguments that experts refute.

A week after the horror of the Kramatorsk strike, Moscow – as almost systematically during strikes that have caused civilian deaths – denies any responsibility, and even claims to have obtained and presented proof of the responsibility of the Ukrainians in sending a missile fell on the Donbass station in Ukrainian territory, where hundreds of civilians were waiting for their trains to flee the Russian onslaught. At least 52 have died, including several children, and hundreds are injured. These elements brandished by the propaganda of the Kremlin, which benefit from an important relay on the social networks, do not in fact prove anything.

During an initial wavering, several pro-Kremlin (but unofficial) channels initially saw the Kramatorsk strike as a successful hit against Ukrainian military targets. Among other things because the Russian army announced, a few minutes before the bombardment of Kramatorsk, having hit three stations in the immediate vicinity (including that of Smolensk which is less than 10 kilometers away).

The latter then methodically denied Russian responsibility for the bombardment. Their main argument is based on the remains of the projectiles used to bombard the station, namely a Tochka-U missile system. The analysis carried out by the BBC on April 13 on the debris and the traces left by the projectiles makes it possible to specify that submunitions were used. An international convention bans their use, among other things for their wide and imprecise impact radius which can be particularly devastating against civilian populations, but neither Ukraine nor Russia are signatories to the treaty. Since the beginning of the invasion, the use of submunitions by the Kremlin on civilian targets has been massively documented.

Russia immediately claimed that these Tochka-U missile systems were not part of its arsenal. This returns, de facto, the responsibility to Ukraine. But that’s incorrect. In reality, both countries have this legacy of the Soviet arsenal. The use of these weapons by Ukraine since the beginning of the invasion has been proven in several strikes on Moscow troops, as has the presence of Russian Tochka-Us around the Ukrainian theater, as pointed out by groups of investigation like the Conflict Intelligence Team (CIT) and Bellingcat, or renowned military analyst Rob Lee.

The Russian MoD claims that Russia does not have “Tochka-U” missile systems. This is demonstrably untrue.

Russia’s 47th Missile Brigade from Korenovsk was armed with Tochka-U and received Iskander missile systems only this January, unlikely to have mastered them already. pic.twitter.com/1FHBQWlcQX

The Russian army has since engaged in another argument: the serial number of the missile, which would be close to those of other missiles fired by Ukraine. Which would confirm, according to their statements, that it was indeed a missile from Kyiv that would have hit the Kramatorsk station. Elements massively brandished for a week by pro-Kremlin spheres and conspiracy relays. Many channels that echo the Moscow line went so far as to share a fake, very realistic BBC video that featured these elements.

The more details on the April 8 tragedy in Kramatorsk emerge, the more evident it becomes that ???????? military was behind this incident

The serial number of the Kramatorsk missile, taken from this report by an Italian television channel broadcast the evening of the strike, is very real. CheckNews also found that the serial number of some other missiles, such as this one, believed to be Ukrainian, fired at separatist Donbass in 2015, differs only by a few units.

Questioned by Bellingcat on the subject, the Ukrainian Ministry of Defense explains that these missiles were manufactured and delivered to their storage places during the Soviet era, and through units of the Eastern bloc. Matching serial numbers would therefore not allow attribution of strikes, as Russia does. Also in its responses to Bellingcat, the Ukrainian defense supports its argument with two documented cases before the invasion of Ukraine, Tochka-U number VG910840, used by Ukraine in 2014 on the town of Snizhne, and missile number VG910865 (only 25 numbers above) of the same model, this time used by Russia in Syria four years later.

“The serial number means nothing”

Statements that go in the same direction as several analysts interviewed by CheckNews. Neil Gibson, a weapons analyst who carefully follows the arsenal deployed in the Ukrainian conflict, is one of them:Without access to classified ammunition data and export tables, the serial number means nothing as to who is or is not responsible.The lack of images of the impact also makes it impossible to estimate the trajectory followed by the missile.

In short, the elements presented by Moscow as convincing are not. But it remains impossible for the moment to attribute with certainty and precision the Kramatorsk strike, as underlined by the various analysts questioned by CheckNews, as well as Bellingcat or the BBC. Even if certain elements nevertheless converge: the frenzied lies of the Kremlin, the announcement by Russia of strikes on stations in this area controlled by Ukraine, or even the images authenticated by Bellingcat of missile fire in the separatist Donbass a few minutes before the Kramatorsk strike, although their trajectory or their nature does not allow a more in-depth analysis, nor the attribution with certainty of the strike to Russia.