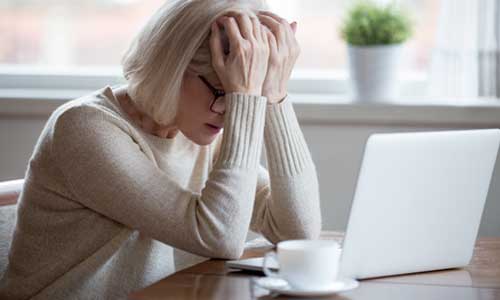 On the occasion of Blue Monday, January 17, 2022, the “most depressing day of the year”, 2 doctors are looking into the link between depression and memory, as well as the usefulness of psychotropic drugs. And what about the impact of the pandemic on our morale?

Blue Monday, what is it? Considered the most depressing day of the year by a British TV channel in 2005. The phrase more generally refers to weekly mood swings and the idea that Monday is the saddest day in the world. week. This “Blue Monday” is celebrated on the third Monday in January. In 2022, it therefore falls on the 17th. On this occasion, the B2V Observatory of Memories looked into the links between memory and depression. Several avenues are explored by Francis Eustache, neuropsychologist, and Catherine Thomas-Antérion, neurologist and doctor in neuropsychology, both members of the scientific council of this Observatory which, created in 2013, has the mission of studying memory in all its forms. Their answers…

Question: What does depression mean?
Responnse : Depression is a generic term that brings together very different situations. It concerns a young or old person, a single or recurrent episode, and we distinguish simple depressions or accompanied or not by other psychic disorders (comorbidities). The depressed person presents a sad mood, a loss of interests, a decrease in vitality and activity; this drop in speed is felt as a source of fatigue. The patient suffers from a lack of confidence and self-esteem, feelings of guilt or worthlessness. Suicidal thoughts are a worrying symptom, with a suicidal risk proportional to the severity of the depression. Other symptoms are constant such as sleeping and eating disorders.

Q: Can it cause memory loss?
R : Depression is not a disease of memory, like Alzheimer’s disease, often considered the prototype of these diseases. Mood disorders will, however, lead to memory problems due to difficulty concentrating and ideomotor slowing. Insomnia also modifies the quality of consolidation because of sleep disorders. In Alzheimer’s disease, there are genuine memory disorders, that is to say that the person fails to record (encode) new information, while forgetting information and memories that he had yet acquired in his past. In depression, it is more about “apparent” disorders. The person suffering from depression has difficulty recalling information spontaneously (in memory tests, this corresponds to the conditions of free recall). On the other hand, and contrary to Alzheimer’s disease, the depressed person is helped by recall cues (the beginning of the words presented in the encoding phase or their semantic category: it was the name of an animal, a fruit etc.) while these clues do little to help the patient suffering from Alzheimer’s. In addition to temporarily impaired memory mechanisms, contents may be altered. Dark thoughts invade the memories which, in turn, invade the depressed person’s thoughts, leading to a kind of vicious circle. Another notable point is the distortion of the perception of time and the projection into the future with the impression of time accelerating. Biographical episodic memories are sparse, dulled, and “over-generalized,” because the depressive is withdrawn during the episode with dulled emotion focused entirely on sadness.

Q: On our brain, what are the traces left by a depression?
R : Neuroscience research, which uses functional brain imaging methods in particular, goes in the same direction as clinical descriptions and shows a dysfunction of the circuits which unite the prefrontal regions (in front of the brain) and the hippocampi, involved in memory. episodic. These alterations are well consistent with the recall (retrieval) difficulties that are observed in memory tests. It is not really the memory mechanisms that are affected but more the strategies that allow the memory to function well. These observations are made in the context of research on groups of patients. They are of little use in clinical practice, in a single patient, unlike Alzheimer’s disease where cerebral imaging methods play a leading role in diagnosis.

Q: In case of depression, is it necessary to prescribe psychotropic treatments (which aim to “normalize the mood”)?
R : This is a very complex question on which it is difficult to generalize given the variability of situations. We can cite, in particular: the age of the patients, their comorbidities (i.e. other possible psychic frailties or the consumption of toxic substances: alcohol, cannabis, etc.), the type of depression (reaction to a life or endogenous). The consensual message, in particular that of the recommendations of the High Authority for Health (HAS) in 2017, is to say that supportive psychotherapy, carried out including by the general practitioner, can be offered without recourse to medication only in the event of depression. moderate and this always with an evaluation at four or eight weeks to review the need to introduce or not a drug treatment. In the event of severe depression which requires it from the outset, it is always recommended to accompany the medication with psychotherapy and, when possible, support from those around you. The antidepressant treatment is chosen according to the sick person and the symptoms requiring it, and always in the doctor-patient alliance.

Q: Do these treatments have cognitive side effects?
R : Most often, people testify, by finding sleep, vital impetus and by reducing dark thoughts, of a better functioning, for example: ” I start to be able to read again without forgetting what I just read on the previous page ».

Q: Even when taking benzodiazepines?
R : Benzodiazepines, especially long-lived ones, cause many side effects after the age of 65. This is why they are only prescribed for short periods in the context of depression, for example in the event of rebellious insomnia. According to a 2012 HAS report: “ The benefit/risk balance is clearly unfavorable for chronic treatments, with a number of potentially serious adverse effects and a source of hospitalization and excess mortality: falls, cognitive disorders, psychomotor and behavioral disorders, road accidents, loss of autonomy , onset of tolerance and dependence, even suicidal risk according to a recent study. Finally, a certain number of epidemiological studies raise the question of an increased risk of major cognitive disorders (Alzheimer’s disease but not only) during their prolonged consumption, which led to a warning message from the ANSM (National Medicines Safety Agency) and a reflection on their prescription.

Q: Do we already have enough hindsight to know the impact of the pandemic on our brain and our mental health?
R : The Covid-19 pandemic and the confinement situations have led, for some people with or without a history of psychological fragility, to a real ordeal, with however great disparities according to social groups and confinement situations. Many studies have been carried out at different times during this health crisis. An increase in anxiety has been highlighted, sometimes followed by depressive symptoms. It is now important to follow regular surveys such as those conducted by Public Health France to estimate the lasting effects of such an anxiety-provoking situation in these people. There has also been an increase in addictions, an element of vulnerability to depression and frequent comorbidity, which requires complex studies taking into account many parameters.

“All reproduction and representation rights reserved. © Handicap.fr. All the information reproduced on this page is protected by intellectual property rights held by Handicap.fr. Consequently, none of this information may be reproduced without prior consent. This article was written by Emmanuelle Dal’Secco, journalist Handicap.fr”