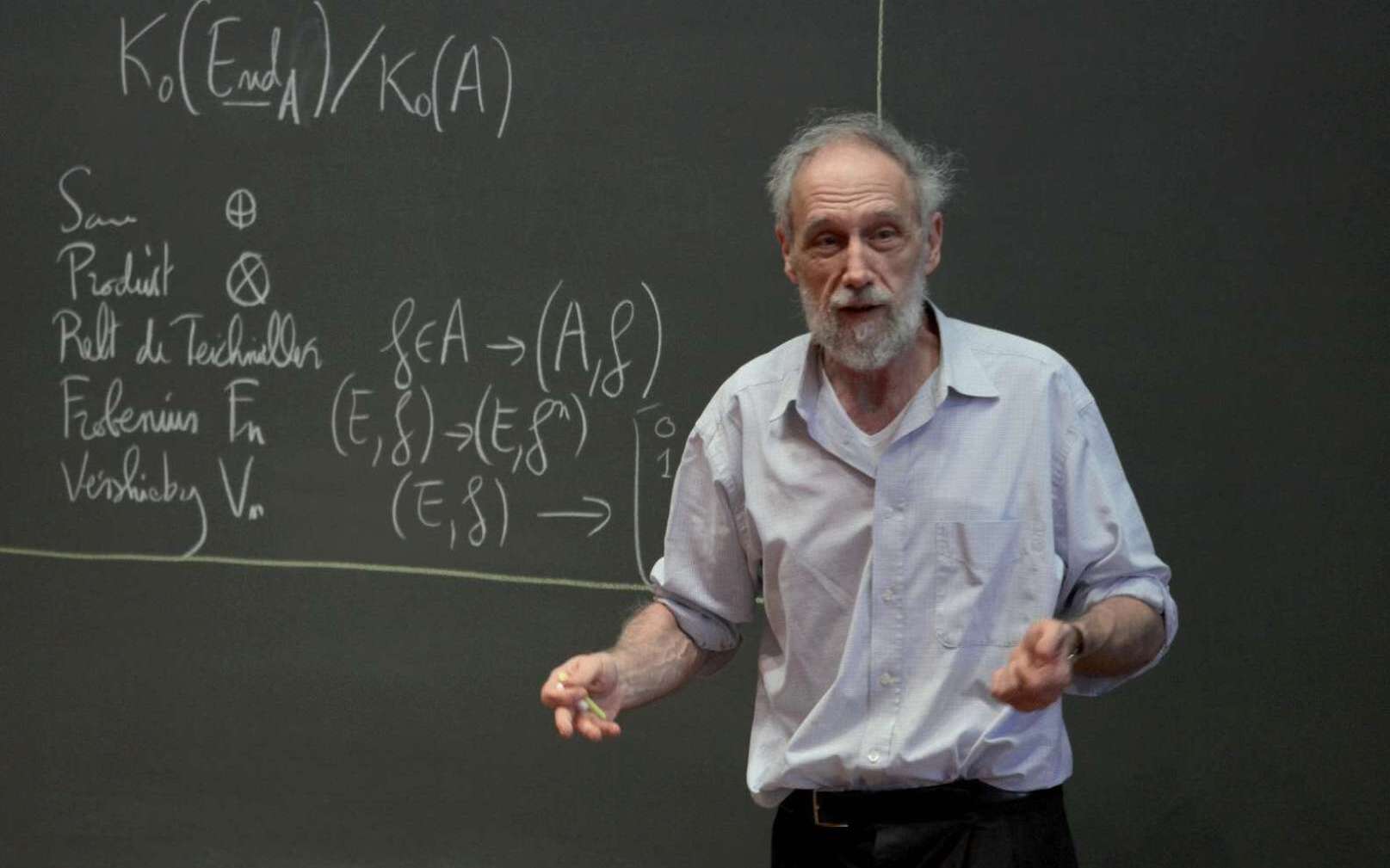 Does Alain Connes' theory unify forces in the footsteps of Heisenberg and Einstein? His explanations.

Like Nobel Prize in Physics Roger Penrose, also a mathematician, Fields Medal winner in Mathematics Alain Connes, one of the greatest mathematicians of our time, uses advanced geometric theories to explore the fundamental physical laws of Nature. Futura had the opportunity to interview him along with Abhay Ashtekar and Jean-Pierre Luminet during a symposium organized by the Archimedes.SIE Foundation, in October 2022 in Saint-Raphaël.

Alain Connes, mathematician and theoretical physicistin line with Laplace and Poincaré, is the winner of the Fields medal in mathematics, a distinction that is often presented as the equivalent of a Nobel Prize in mathematics.

It was awarded to him for work that the site of theInternational Mathematical Union (who awards the Fields medals) mentions in these terms, his ” contribution to the theory of operator algebras, in particular to the general classification in theoremtheorem structure of type III factors, the classification of automorphisms of the hyperfinite factor, the classification of injective factors and the applicationsapplications from the theory of C*-algebras to foliations and differential geometry in general ».

He is also the winner of the Crafoord prize (2001) and the CNRS gold medal (2004), Emeritus Professor at the College de France et al’Institute of Advanced Scientific Studies where the legendary Alexandre Grothendieck, winner like him of the Fields Medal, worked.

He is probably best known to the general public educated in mathematics and physiquephysique theory for his discovery of a new form of geometry, inspired by the laws of quantum mechanics and his work on operator algebras, and which is called noncommutative geometry. This geometry led him to follow in the footsteps ofEinstein and of Heisenberg in search of a unified theory of the fundamental forces and particles of Nature.

But the general French public probably discovered it with the book he had written with the neurobiologist Jean-Pierre Changeux, entitled food for thought, and which notably explored age-old questions: What are the relationships between mathematics and reality? Do we discover or invent mathematics? More recently, this same general public was able to read two novels by him co-written with Danye Chéreau and Jacques Dixmier: The Quantum Theater et The Atacama Specter. In The Quantum Theater mention is made of the phenomenon of quantum entanglement, a phenomenon which was in the news in October 2022 since it won the Frenchman Alain Aspect the Nobel Prize in Physics.

During a series of interviews also with Abhay Ashtekar and Jean Pierre LuminetJean Pierre Luminetwe had the chance to ask several questions to Alain Connes about his work concerning both his exploration of the mathematical world and that of the physical world.

Futura had written these articles with the help of the physicistphysicist and mathematician Pierre Martinetti:

In Alain Connes’ interview conducted by Futura, we asked him the following questions which he answered in the introductory video of this article.

1.The geometry ofEuclidEuclid to Descartes makes use of operations which are said to commute, which concretely means that the order does not matter when adding or producting two numbers to calculate lengths, areas or even angles. But Heisenberg’s quantum mechanics describing in particular the world of atomsatoms interacting with the lightlight somehow makes use of new numbers whose product does not necessarily commute.

You used this fact to discover a new geometry naturally called noncommutative geometry. For the layman, this may seem very obscure, but aren’t there situations in everyday life where one can grasp intuitively and concretely that some form of non-commutativity is involved?

2. Einstein sought at the end of his life to generalize his relativistic theory of gravitation to unify the electromagnetic force with the gravitational force, using in particular new geometric theories. But the XXe century has amply demonstrated that the world is fundamentally quantum. Is it therefore possible to imagine unifying physics by using a non-commutative geometry precisely inspired by the quantum world?

3. What are the predictions of such a theory that we can hope to test, for example with particle accelerators, via the boson de Higgsboson de Higgs ?

4. We cannot decide a priori what human knowledge is capable of, we can only have theories about it more or less supported by experience. Do you think that the history of mathematics and physics during the XXe century has provided strong evidence to suggest that the most reasonable theory on this subject is that we do not invent mathematics and that, to some extent, the physical world is constructed from mathematical forms such as the thought Plato?

Finally, some reflections and indications of paths to explore for those who would like to go further by already having a certain background in mathematics and physics.

An algebraic axiomatization of quantum field theory, from von Neuman to Haag

In his famous book Harvests and sowing. Reflections and testimonies on a past as a mathematician (chapter 2, § 7, note 20), Alexandre Grothendieck refers to Arthur Koestler’s “sleepwalkers”, those researchers who stumble upon fundamental discoveries in science without really knowing how, or without really being aware of the full significance of this which they discovered while walking like a somnambulist guided unconsciously by contact with Plato’s world of ideas.

This is undoubtedly what happened in 1925 to Werner HeisenbergWerner Heisenberg while he was on the island of Helgoland (see on this subject the interview of Carlo Rovelli for Futura) and that he came across an algebraic formulation of the fundamental equations of quantum mechanics. It was an alternative formulation to that which was soon to emerge from the work of Erwin SchrödingerErwin Schrödinger on the waves of mattermatter of Louis de BroglieLouis de Brogliea much more intuitive formulation and based on the theory of partial differential equations of classical mathematical physics expounded masterfully at that time, and all ready for use, in two famous volumes of a treatise whose drafting had been conducted under the direction of Richard Courant et David Hilbert.

The two formulations are equivalent for many simple problems of quantum mechanics met in atomic and molecular physics, but sometimes more really in quantum theory of the fields of elementary particles where certain questions are more rigorously approached from a purely algebraic point of view and without reference. to images from classical physics.

See also  Does Alain Connes' theory unify forces in the footsteps of Heisenberg and Einstein? His explanations.

Mathematical questions arose in both formulations and a deeper treatment was necessary, which led the great mathematician von Neumann to mobilize tools that we owed to the German school of mathematics around Hilbert, but also from the Polish school around Stefan BanachStefan Banachnamely modern algebra à la van der Waerden, the theory of Hilbert spaces and linear operators in functional analysis that go with it. The result was von Neumann’s mythical treatise on the mathematical foundations of quantum mechanicsbut also articles by von Neumann on the algebras of operators which will influence the creation of what is called the algebraic theory of quantum fields to which several names will be associated such as, for example, those of Irving Segal et Rudolf Haag.

In a way, von Neumann had sought to do the work of axiomatization and rigorous shaping of some sort of new calculation for quantum physics that would represent a leap as big as the discovery of the infinitesimal calculus par NewtonNewton and Leibnitz, a calculation for which a more rigorous formulation had only been found in the 19th century.e century with in particular the work of Weierstrass. This is how von Neumann made the discovery of the algebras bearing his name and that Alain Connes will then draw from it his theory of noncommutative geometry.