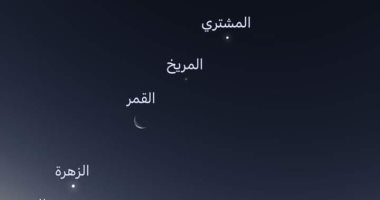 Do not miss watching .. A rare alignment of 5 planets at dawn in a view seen with the naked eye

Observers in the skies of Egypt and the Arab world are preparing to see a rare meeting of the planets in the early morning sky before sunrise today, Friday, June 24, 2022, where the five visible planets will all line up at the same time, in a row, with the moon in a view seen with the naked eye for the first time in 18 years.


The Jeddah Astronomical Society revealed in a report that the five planets are known as the visible planets because they can be seen without the need to use binoculars or a telescope, and they are Mercury, Venus, Mars, Jupiter and Saturn, and their alignment will be on the dome of the sky according to their natural arrangement in terms of distance from the sun.


The alignment of the planets is an astronomical event that occurs when a group of the planets of the solar system appears in approximately one row in the same region of the sky, as seen from Earth and in space, being on the same side of the sun.


Everyone can see the alignment of the planets at dawn on Friday from anywhere, provided that the eastern horizon is completely exposed and not obscured by buildings or natural terrain, since Mercury will be low towards the horizon, while the other planets will be high in the sky.


It is preferable to observe the planetary alignment an hour before dawn, as Jupiter, Saturn and Venus will be the conspicuous planets among the stars and will be very vibrant and bright, Mars will be to the left of Jupiter and Mercury to the left of Venus and will form an arc from east to south.


The planets align on the same line, not in the literal sense. The planets never line up perfectly, because they do not all revolve around the sun in the same plane, but in different orbits, so they will never line up identically. And from theIt is worth noting that such planetary alignments will be repeated in the year for several years, specifically in the year 2040.