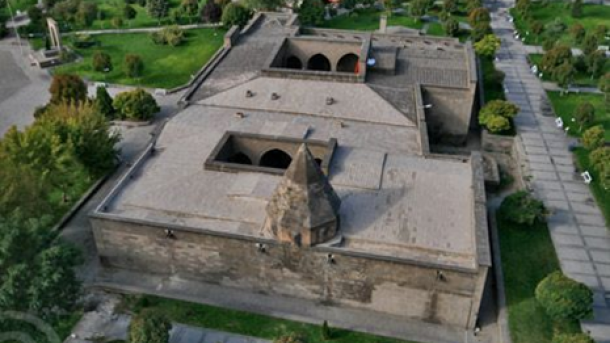 The hospital and madrassa, where he taught medical sciences and was built by his older brother Gıyaseddin Kaikosru I in 1206, by will of the Sultana Gevher NesibeDaughter of Kilij Arslan II, one of the Seljuk rulers, she is the world’s first center to provide medical education and health services together.

Sultana Gevher Nesibe fell in love with the palace’s chief sepoy and her older brother Gıyaseddin Kaikosru I did not allow them to marry. Kaikosru I sent the sepoy to war and had him die in the war. Gevher Nesibe, who fell ill after that, bequeathed his brother to build a hospital that people could use for free on his behalf before he died. Kaikosru I, who was very saddened by the death of his sister, had the hospital built between 1204-1206 and the medical school between 1210-1214. At the hospital, a pharmacy also served alongside the departments of internal medicine, surgery and ophthalmology, psychiatric hospital, and mental illness. Famous Turkish doctors of the time were educated and taught in this madrassa.

Gevher Nesibe Hospital and Madrasa was converted into a museum by the University of Erciyes and opened to visitors in 1982 as Museo de Historia de Medicina de Gevher Nesibe, which is also known as Gevher Nesibe’s Darüşifa.

READ  Washington asks to deny demand for importation of medicines