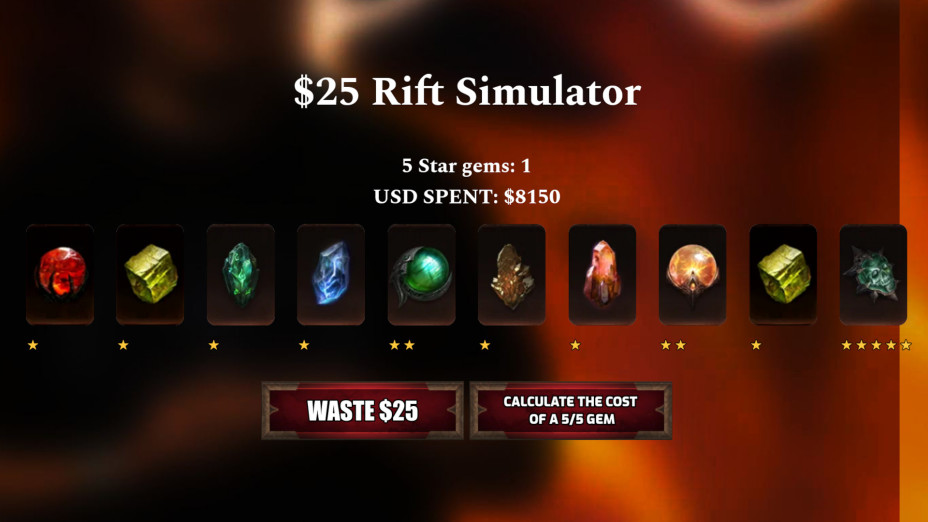 Diablo Immortal: Simulate the price of your 5-star gem

One of the traps set for players by casinos with slot machines, and by extension, by Diablo Immortal, is that it is very difficult to really visualize their real chances of “winning” the jackpot, in this case, a 5 Star Legendary Gem, and how much it’s going to cost before you have a statistically high chance of finding one. Of course, like the lottery, some lucky players will get the gem of their dreams quickly, even on the first draw, but that’s another reality that awaits the vast majority of players.

It is in order to help players tempted to open their wallet to Blizzard, that Buzzycat developed this $25 Ancestral Rift Simulator (the cost of 10 Emblems when purchasing Eternal Orbs). You can settle for a few flaws, to see what your budget can potentially offer you if you are lucky or not. The second button allows you to burn money until you get one of the elusive 5-star gems. We did several tries, the first time it was obtained for 3200 dollars, and it was a Bloody Jade, the best Gem in the game. The second gem however was not obtained before having passed the milestone $19,000. On our second attempt, it took over $8,000 to get the first 5 star gem. It does indeed give food for thought.

A realistic representation of the chances of getting a 5 star gem?

This simulator is based on official in-game store data, the chance of getting a 5 star gem is 0.045% which is less than 1 in 2000 chance. This gives an average of over $5000 to get a 5 star gem. The examples of players who have been lucky in this area exist, but it should also not be forgotten that there are inverse and famous examples of unlucky players, such as Quin69, who spent over $10,000 live stream without getting one. And of course, there is no guarantee that the 5 star gem obtained is the one you want, since there are 10 of them, the chances of obtaining exactly the one you want are 1/20,0000, which gives 50,000 dollars in mean.

The current flaw of this simulator is that it does not simulate “pity”, the pitiful stat built in by Blizzard, the one that guarantees a ?/5 gem for every 50 Legendary Emblems spent, if you didn’t get one. But since this gem only has a 1% chance of being 5 stars, it only symbolically increases your chances of getting your dream gem.

The latest estimates show that the figure of $110,000 to optimize his character on Diablo Immortal was actually optimistic. Getting the 6 desired 5-Star Legendary Gems, and enhancing other items, like normal Gems, also costs a fortune.

Failing to invest indecent sums in the game, you can consult our guide to farming Legendary Gems in F2P, in order to progress as much as possible without paying, hoping for a future revision of the system by Blizzard.