Frankfurt Despite the burdens caused by the corona crisis, Deutsche Bank is doing better than expected. The special boom in investment banking in the second quarter ensured that the results of the institute were better than most analysts had forecast. The money house was thus able to offset the burdens in the lending business by significantly increasing loan loss provisions.

The bank’s previous business development now motivates it to be cautiously optimistic: it has raised its earnings forecast for the current financial year and is now assuming that earnings will remain “essentially” unchanged, rather than falling slightly as before. There will be another dividend for the 2021 financial year.

CEO Christian Sewing was accordingly satisfied. “The fruits of all our work are becoming more and more visible,” he wrote in a letter to the employees. The manager also appreciated the progress made in implementing his strategy. “In a difficult environment, we increased our earnings, further reduced our costs and are well on the way to achieving all of our goals,” said Sewing.

The institute is in the middle of the largest renovation in its recent history and plans to cut around 18,000 jobs. Around a third of these had already disappeared by the end of June.

For the 2020 financial year, analysts still expect the bank’s pre-tax loss of 830 million euros. The institute actually wants to be in the black before taxes. Despite the distortions caused by Covid-19, CFO James von Moltke has not yet given up on the goal. “We are working on it,” emphasized the manager.

The pessimism of the analysts is primarily related to the forecasts for risk provisioning. According to their estimates, it should be as high in the second half of the year as in the first half of the year and rise to 2.4 billion euros. The bank itself, on the other hand, assumes that the high point has now been passed.

In the second quarter, it had set aside EUR 761 million for the lending business, of which EUR 410 million was due to the corona crisis. In comparison to other institutes, however, it is still in a good position. The major Spanish bank Santander set aside 3.1 billion euros for problem loans.

Praise for the figures comes from major investors and the rating agency Moody’s: Moody’s analyst Michael Rohr said that the progress in the restructuring is reflected in the improved numbers of the core bank. Overall, the bank is now better equipped to deal with the upheavals of the corona crisis. For Andreas Thomae, fund manager of Sparkasse fund subsidiary Deka, the result is “very good”.

The corporate bank envisages the new strategy launched by Sewing a year ago as the core of the institute. However, the low interest rates are bad for the division. The bank steers against this with negative interest on customer deposits. This ensured a special income of over 100 million euros. However, the fact that earnings rose slightly in the reporting quarter was due to special effects such as refunds from loan defaults. Moody’s analyst Rohr described the result as “mediocre”.

The investment bankers of all people stole the show from the corporate bank. The division had been significantly reduced in the course of the restructuring and was long considered a grave for billions. Now she was particularly pleasantly surprised.

Because the consequences of the corona pandemic are forcing investors to rearrange their portfolios, there is a lot of activity in the trading rooms of the large investment banks. “This is the third quarter in a row in which we have been able to reduce costs while increasing sales in the investment bank,” said chief investment banker Mark Fedorcik. This also reassures investors. “The worry that the investment bank will continue to lose market share seems to be over,” says fund manager Thomae. 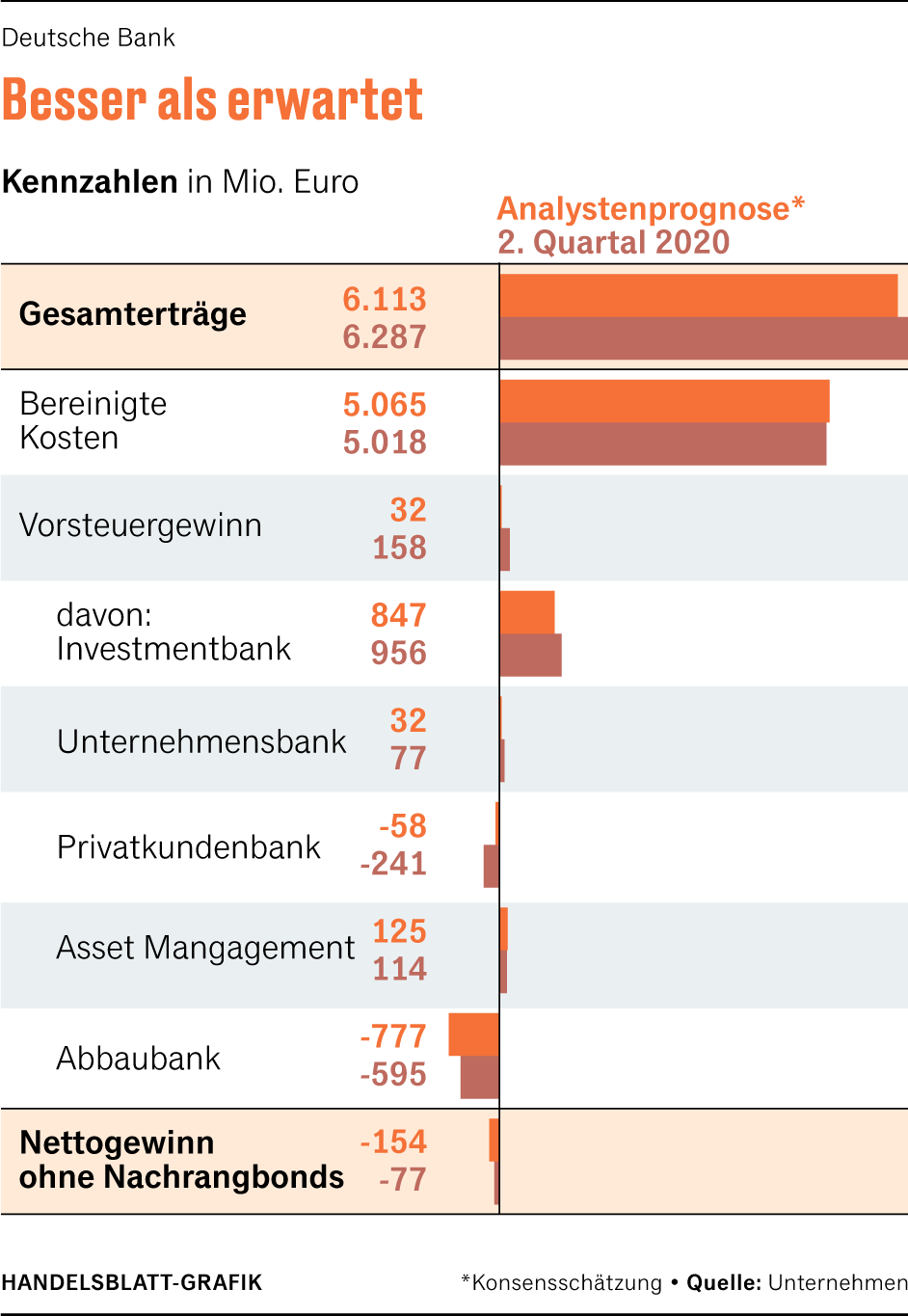 Moltke’s CFO expects investment banking to “normalize” in the second half of the year. The head of the retail division, Ram Nayak, is more optimistic. He does not assume that sales from trading in fixed-income securities will come close to the recently published peak values ​​in the third quarter. “But in some areas, especially foreign exchange and credit trading, we could do better than in the third quarter of 2019. The foreign exchange market is still benefiting from the rising euro, which usually leads to increased activity among customers,” Nayak told Handelsblatt.

The division’s return on equity of 11.5 percent was only exceeded by the asset management arm, which essentially consists of the fund subsidiary DWS. However, the fund house is suffering from pressure on its own margins. Because investors are particularly interested in DWS products with lower fee margins.

The biggest disappointment was the private customer division in the second quarter. A pre-tax loss of EUR 241 million was incurred in this area, four times as much as expected by analysts. The background to this are conversion costs in the German business, a write-down on an investment by the Digital Ventures digital division and negative consequences of the corona crisis in southern European private customer business.

For investors, the bank’s capital base is at least as important as the earnings figures. The bank is now somewhat more confident about the development of the core Tier 1 capital ratio. The institute relativized its statement that this key figure could temporarily fall below the 12.5 percent mark.

In the second quarter, more customers than expected had repaid loans, causing the rate to rise unexpectedly to 13.3 percent. Now the bank writes, “that the probability of a slight and temporary decline below 12.5 percent is now significantly less than was expected at the beginning of the second quarter of 2020”.