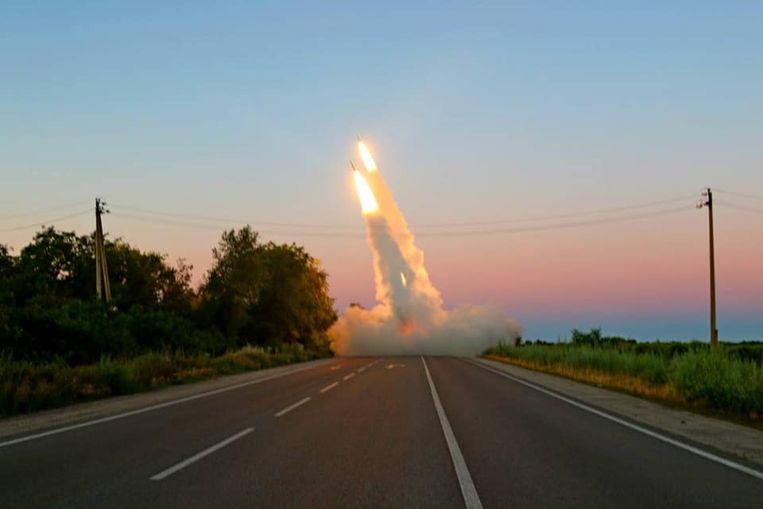 ‘Destroy it with high priority’

After numerous videos of Russian ammunition depots and storage depots receiving a direct hit from a Himars missile, Defense Minister Sergei Shoygu arrived in Moscow on Monday with an urgent appeal. “Destroy, with great priority, the long-range missiles and artillery deployed by the Ukrainian forces,” the minister ordered a general whose troops are fighting in the Donbas.

It was the first time that such a senior Russian implicitly acknowledged that Himars (High Mobility Artillery Rocket Systems) pose an increasing threat to Russian military operations. Not a day goes by without videos appearing on Twitter and Telegram showing key Russian targets being hit by the most dangerous US weapon in Ukraine. From the Donbas to Kherson in the south.

The American missiles are guided to their target with GPS and can hit Russian command centers, supply lines and storage depots with great precision up to 70 kilometers. The western howitzers that Kyiv has received do not reach more than 50 kilometers. “Another Russian munitions depot destroyed,” Andri Jermak, adviser to Ukrainian President Volodymyr Zelensky, wrote Sunday in a video of a massive explosion.

According to Kyiv, the depot was located in southern Ukraine. The Ukrainians now claim to have destroyed at least 30 Russian logistics centers and ammunition depots. In large part with the Himars, which can fire six missiles at a time, landing within meters of the target. The Himars have been in action in Ukraine for a little over a month now.

The success of the attacks is fueling some optimism in Kyiv, weeks after the loss of the Luhansk region. Zelensky said Monday night that the Ukrainian military is now able to inflict “significant logistical losses” on the Russians. Army chief Valeri Zaluzhnj even argued that with the timely arrival of the Himars, Ukraine had managed to “stabilize the situation.” “They inspire us,” the Defense Ministry tweeted about the Himars. “They frighten the enemy.”

The Ukrainian army’s intent in the attacks is clear: paralyze the Russian offensive by disrupting the supply of ammunition, gasoline and other important military supplies. By not targeting the Russian artillery at the front directly with the Himars missiles, but the logistical operations behind the lines, the Ukrainians hope to hit the Russians harder.

According to the US, the attacks with the eight Himars delivered batteries have a “significant” impact on Russian operations. The Himars missile, which is likened to a sniper rifle for its precision, has an explosive ranging from 90 to 300 kilograms. With a speed of more than two thousand kilometers per hour, the projectile hits Russian positions. A Pentagon official points out that the Russians have slowed down their advance into the Donbas and even put in an “operational pause.”

This prevented a major attack on the Donetsk region. “All of these attacks directly affect the ability to conduct operations on the frontline,” the senior official said during a briefing on the Himars’ deployment. “We have all seen the Russians slow down their movements and advance. It’s hard for me to believe it’s not somehow related to the loss of ammunition or the loss of someone telling them where to go.”

Frans Osinga, professor of war studies at Leiden University, also points out that with the Himars, Ukraine has acquired a dangerous weapon with which the Russians are being hit hard. Moscow’s pause in fighting could cost the Kremlin dearly. “The systematic attacks on depots could have a moderating effect on Russia’s ability to sustain the intensity of the artillery shelling,” said the former F-16 pilot.

Shoigu’s call is not the only sign that the Kremlin is concerned about Himars’ destructive power. President Vladimir Putin’s visit to Iran on Tuesday has also been linked to the success of the missile system. According to the US, Iran is on the brink of quickly delivering hundreds of attack drones to Moscow. The drones will allow the Russian military to more easily locate and destroy the Himars batteries, as well as the 127 American howitzers that bombard the Donbas.

The Russian Ministry of Foreign Affairs also made a statement. It denounced the American and British missile training for Ukrainian soldiers last week. The British and Germans have promised a handful of similar missile systems, the MLRS, which can fire as many as twelve missiles in a short time.

Shoigus’ urgent appeal comes a week after pro-Russian separatists in the Donbas and military bloggers in Russia admitted that the Himars were causing great damage. Igor Girkin, defense minister in Donetsk in 2014, denounced the Russian military’s inability to stop the Himars attacks. He also found it shameful that the Russians were unable to prevent the missile systems from landing in Ukraine.

“Over the past five to seven days, more than 10 large warehouses with artillery and other ammunition, several oil depots, about a dozen command posts and about the same number of military sites were hit,” said Girkin, a top MH17 suspect. ‘There are major losses in personnel and equipment.’

Ukraine is now using the Himars success to significantly increase the pressure on the US and other countries to quickly supply more missile systems. Because if just eight Himars batteries can inflict so much damage on the Russians, what can dozens more do? ‘A game changer in the war,’ said Defense Minister Oleksi Reznikov of the Himars.

Four more US Himars systems have now arrived in Ukraine, but the US has not promised more to follow. In fact, Washington has restricted the Ukrainians’ room for maneuver by not supplying missiles with a range of up to 300 kilometers. The US fears that Kyiv will come under fire on the Russian border region. An adviser to Zelensky said last month that the army needed at least 300 Himars batteries. In total, manufacturer Lockheed Martin has produced just over five hundred Himars systems, most of them for the US.

According to Michael Vickers, who as a CIA official helped arm the rebels in Afghanistan against the Russians, Ukraine could win the artillery war with 60 to 100 units. Shorten the war, send sixty Himars to Ukraine Washington Postcolumnist Max Boot. “Such a commitment could turn the balance of power on the ground and enable a Ukrainian counter-offensive to reclaim lost territory.”