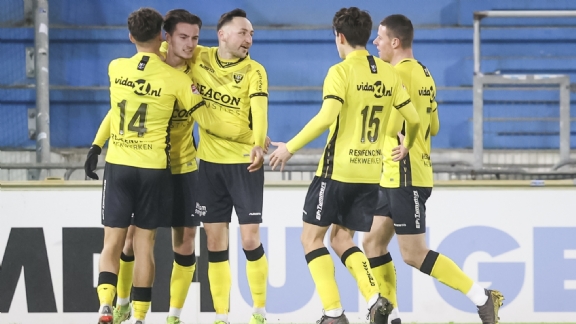 VVV-Venlo booked a small victory in the Kitchen Champion Division on Sunday evening. On a visit to De Graafschap, the Limburgers proved too strong with 1-2 after more than ninety minutes. Nick Venema made his debut in the VVV shirt and scored the winning goal in the 73rd minute. Thanks to the three-pointer, the team of trainer Jos Luhukay, who has 26 points, climbs to tenth place in the ranking. The Doetinchemmers (36 points) lost a home game for the third time in a row and are stuck in sixth position in the ranking.

In the initial phase, it was mainly a matter of scanning between numbers six and twelve in the Kitchen Champion Division. In the 25th minute Aaron Bastiaans was sent in and the left winger had a free passage towards De Graafschap’s goal. However, he was called back for offside. Venema, who made his debut at VVV, seemed to be on his way to the 0-1 shortly afterwards, but his slide into the far corner was parried by the alert Hidde Jurjus.

On the other hand, Devon Haen was very close to scoring the opening goal for De Graafschap, but his effort was defused wonderfully by goalkeeper Delano van Crooij. Venema thought about a handball in the penalty area of ​​De Graafschap ten minutes before half-time, but the ball nevertheless did not go on the spot. Four minutes before the halftime signal, VVV took the lead. Bastiaans was not offside this time and Jurjus had no answer to his watch: 0-1. The visitors from Venlo therefore went to rest with a minimal lead in Doetinchem.

After the break, VVV went looking for the second goal, with the regularly dangerous Venema. The mercenary was pushed to the ground in the 53rd minute by Ted van de Pavert, who was shown a yellow card. Joeri Schroijen’s free kick then disappeared over the goal. Johnatan Opoku was unlucky two minutes later when his header went off the post. The rebound was also not for the attacking midfielder of De Graafschap. The equalizer came after all. Jasper van Heertum extended the ball and it was Van de Pavert who took care of the 1-1 at De Vijverberg. The decision came in the 73rd minute. Venema took maximum advantage of the defensive inattention on the part of the home team and only went after Jurjus. In a cool way, Venema took care of the final score: 1-2.

Voetbalzone is the official media partner of the Kitchen Champion Division

This match was played the day before yesterday