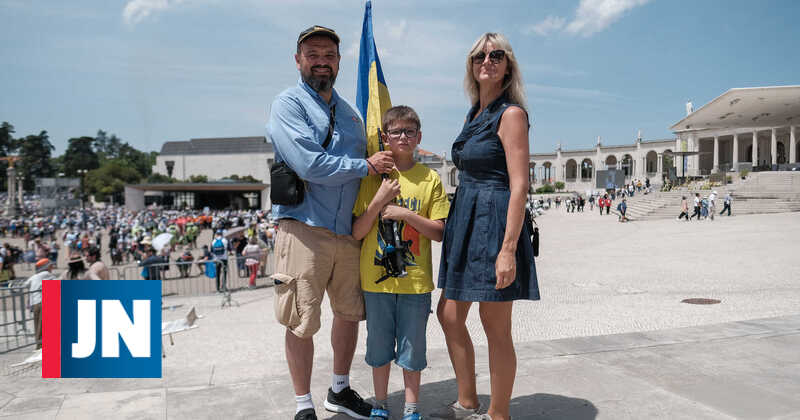 Daniel, the Ukrainian boy who found 105 euros and went to Fatima to offer them to the Virgin

There were about 170 thousand pilgrims who, this Friday morning, participated in the May 13 ceremonies. Among the faithful were Sergiy and Natalyia, two Ukrainians who pray, with their son, for the end of the “hell” of the war. Daniel arrived with a special mission: to offer the Virgin the 105 euros he found on the floor in December, when he went with his family to see the film “Fatima”.

With his son Daniel by the hand, Sergiy Zayika crosses the prayer hall, waving the flag of his ‘dear’ Ukraine. For a moment, they accompany, from the outside, the procession of banners that follows at the top of the procession with the image of Our Lady, leaving the Capelinha das Aparições, towards the altar.

War in Ukraine. Marcelo considers Portugal to be a “net beneficiary” of the international situation

They shyly approach the procession and are immediately incorporated in front of the group, between two standard-bearers with the flag of Portugal. At the end of the ceremonies, with emotion on his face, Sergiy, a mechanical engineer who has lived in our country since 2000, says that he has been coming to Fátima on foot for eight years, “always” accompanied by the Ukrainian flag.

The first trip took place in 2014, also in a context of conflict in his country, with the Crimeira crisis. But this May 13 had a “special” meaning for Sergiy Zayika and Natalyia Shuneyko, his wife, both with family members in Ukraine, who “are going through hell”.

Natalya says that her mother has “health problems” and is “very fragile”, to the point of “not being able to stand” the trip to Portugal. A civil engineer, currently unemployed, reveals that, after the bombings of the city of Kryvyi Rih, her mother took refuge in a village, where she is in “relative” safety, because “there are no strategic targets nearby”. Sergiy’s parents are also still in Ukraine. “My father doesn’t want to leave his land and my mother doesn’t leave him alone.”

Even today, the couple will talk to family members on the phone, as they do every day, and, surely, Fátima will join the conversation. They want to talk to them about the “peace” and “tranquility” they found “once more” in Cova da Iria and the “comfort” they felt, through the demonstrations of support for the Ukrainian people, through “words and gestures”.

“We came with a lot of hope that the war will end. We hope that a miracle will happen and that peace will return to Ukraine”, says Sergiy. Next to him, his ten-year-old son looks at him with pride, he who also came to Fátima with a “special mission”. Shy, he lets his mother reveal it. In December, when he went with his family to see the film “Fatima”, directed by Marco Pontecorvo, he found 105 euros lying on the floor, which he now came to offer to Our Lady.

The conversation with Sergyi and Natalyia takes place at a time when the venue is already emptying, at the end of a pilgrimage that marked the return of the crowds to Cova da Iria. In a Sanctuary full of the faithful, they prayed for the end of the war. In fact, that was the intention that Rita Soares put on this pilgrimage, her 33rd walk to Fátima, in 77 years of life. “I did it half by car and half on foot. My legs and heart can’t take it anymore”, explains ‘Ritinha’, as she likes to be treated, wielding a staff that has been with her for years, this time decorated with white flowers and yellow ribbons. and blue, similar to other elements of the group coming from Gondomar. “It symbolizes that we are in Fatima with Ukraine at heart.”

The appeals for peace were also present in the homily of the pilgrimage mass, given by Archbishop Edgar Peña Parra, Vatican diplomat, and in the final message of the Bishop of Leiria-Fatima.

In the homily, the representative of the Holy See underlined the importance of “listening to the reasons of the other and giving priority to dialogue and negotiation”, which he considered “the only paths to a stable and lasting peace”.

Edgar Peña Parra also exhorted the faithful so that, in these “troubled” times that the world is going through, they surrender to God, because “embracing the Lord, there is nothing to fear”. “Even in these difficult times, marked by the scourge of war and the virus of the pandemic, rejoice: not in the world, but in the Lord, because he is faithful to his promises”, said the archbishop, adding that in the “work of renewing the Church and the world, Fatima occupies a prominent place”.

“Being here in Fatima, on May 13, means above all responding to a call to prayer, to deposit in the Immaculate Heart our world, wounded and torn by lack of peace”, added the archbishop, who presided over the first anniversary pilgrimage of the year.

For his part, D. José Ornelas, recently sworn in as Bishop of Leiria Fátima, in his final greeting to the pilgrims, also expressed the wish that the message of peace that Our Lady “came to bring to Fatima be welcomed in the hearts of those who feed this war, so that barbarism can be stopped and a new world can be built, with justice, solidarity and peace”.

“May the maternal presence of Mary, model of the Church that takes care of the smallest and most fragile, shine in this difficult time”, which is still embodied in a “pandemic that conditions all humanity and a war that affects Ukraine with tragic and destructive ferocity” , said the bishop.

At the end of the pilgrimage, Dom José Ornelas proceeded to the blessing of an image of Our Lady destined for the cathedral of Lviv, Ukraine, offered by the Sanctuary of Fatima, a moment much applauded by the pilgrims.