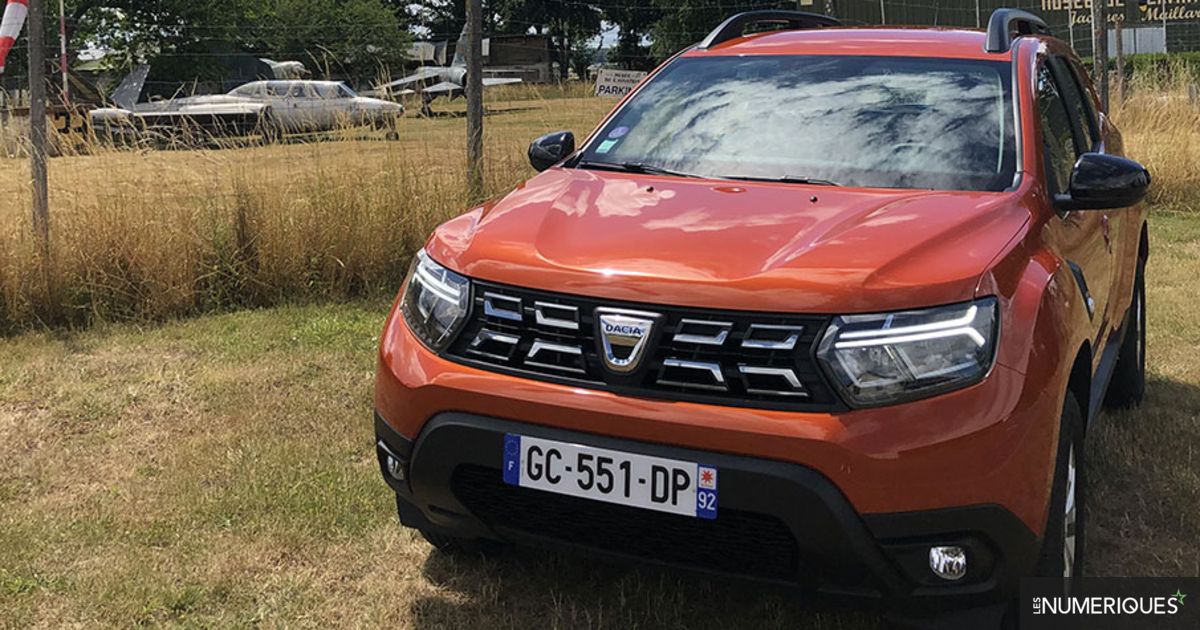 Dacia, owned by Renault, has made a name for itself on the French market by offering vehicles at competitive prices while maintaining an attractive price/performance-equipment ratio. A winning trio in these times of crisis when black gold continues to climb? This is what we will check in this test…

Flagship of the manufacturer while waiting for the Bigster, the Dacia Duster has sold more than two million copies since its arrival on the French market in 2010. This SUV underwent a second slight restyling in September 2021, of which we will remember a new light signature made up of LEDs and a more imposing grille displaying a new design.

These small alterations in no way change the adventurous look displayed by the Duster, which retains its body-built wings, its high wheel arches and its roof bars now tinted in black.

When we started this test, the Dacia Duster still displayed its old identity.

But as we write a little above, Dacia has evolved its brand identity “to make it more contemporary and assertive“. First visible change, the new “Dacia Link” emblem which appears on the front face, the wheel caps and the interface of the multimedia systems of all the brand’s models. It consists of a “D” and a “C” joined together. Pokemon fans will also find a certain resemblance to Magneton…

Outside and inside, the “DACIA” brand with minimalist graphics is spread everywhere, while a new color is appearing, khaki lichen.

The finishes have been renamed and those now available are called Essential (from €15,990), Expression (from €18,650), Journey (from €19,900) and Journey+ (from €20,200). ). The latter is only available with the Up&Go offer which guarantees a “expedited delivery” a Prestige finish accompanied by additional equipment. All you have to do is choose between the LPG engine or the Blue dCi 115 diesel as well as one of the 7 colors offered.

Finally, the choice of engines in this new range remains the same: two 130 and 150 hp TCe petrol engines (only with automatic gearbox), a Blue dCi 115 diesel engine in 4×2 or 4×4 and finally a dual-fuel petrol/LPG ECO- G100, identical to the one tested by us on the Jogger SL Extreme TCe 110.

This “new” Duster will be available in September 2022.

Competition level, at this price, the Dacia Duster does not fear anyone for the moment. Indeed, the Renault Captur, Peugeot 2008, Opel Mokka and other Citroën C3 Aircross, although designated competitors, cannot compete in terms of price / performance-equipment ratio. The only competition will come from the second-hand market.

As we said above, its last restyling, rather discreet, dates from 2021 and made it possible to highlight the grille as well as the light signature. A trained eye will notice here and there a few small exterior details such as the roof bars adopting black plastic.

Only the body has not been touched up. It is she who gives her adventurer look to this SUV capable of accommodating up to 5 people.

In this regard, the rear seat (1/3 – 2/3) offers three real seats, even for the middle passenger who, despite everything, will stumble in the back of the central storage compartment supporting the two USB-A sockets.

The trunk volume increases from 478 to 1623 liters when the bench seat is folded down. There is no removable floor or second hiding place.

The driver and passenger will be delighted to benefit from height-adjustable seats that offer good support. Since it is a question of posture, the steering column is now adjustable in depth. A welcome upgrade.

Although plastic reigns supreme, enormous progress has been made in terms of presentation, finishes, materials and ergonomics. In view of the price, nothing to complain about on the interior presentation side.

Among this concert of praise, we emit a flat on the number of storage. The center console has two cupholders and a deep but narrow storage compartment topped with an armrest. Another location located under the USB sockets allows you to store a small smartphone. Added to this is a classic size glove box and the two small door storage compartments.

Despite its position low-costthe Dacia Duster does not ignore new technologies, an essential element to attract customers in 2022.

Thus, our Comfort version is equipped with the “Media Nav 8” pack consisting of an 8-inch touch screen (20.32 cm diagonal) signed LG. Although placed a little low, forcing the driver to look down, the interface of this screen is functional, relatively responsive and above all easy to handle.

The left side of the screen has four touch controls (power on, volume control, Home button and access to vehicle settings). The interface is limited to 6 icons (radio, media, telephone, vehicle, navigation and Apple CarpPlay/Android Auto). Note that compatibility with Apple CarPlay and Android Auto is wireless.

On the other hand, when driving, we were able to observe untimely disconnections when using the Waze community application from CarPlay. Another strange phenomenon, the reception of the stations was much better in FM mode rather than in DAB+.

On the driver’s side, the multifunction steering wheel has only 7 buttons, two of which allow activation of the speed limiter and cruise control. Another scrolls on the small 3.5-inch monochrome screen – wedged between two traditional meters – a certain amount of information such as current speed, average consumption, gear change indicator, remaining range, etc

Note the presence of a basic voice assistant that is triggered from the right side of the steering wheel.

Similar to what is found in Renault, the Dacia Duster has a satellite mounted on the steering column, behind the right side of the steering wheel, to control audio and telephone.

Our test version is the TCe developing 130 hp for a torque of 240 Nm. It is associated with a 6-speed manual gearbox. This engine was jointly developed by the Renault-Nissan-Mitsubishi Alliance and Mercedes engineers. It is therefore found on the Mercedes Class A (180 and 200) and Class B. It replaces the 1.2 Tce 125 manufactured by Renault and gains 5 hp and 35 Nm.

On the road, the TCe 130 is sufficiently torquey and quiet – apart from some air noise around 110 km/h – to propel the 1242 kg. Overtaking is easy thanks to sharp accelerations and acceptable pick-ups. Nevertheless, there is a dip at low revs, below 2,000 rpm, forcing you to play with the gear lever. Loaded with four adults and full trunk, the engine may however quickly show its limits.

In terms of road handling, the Duster is comfortable thanks to the long travel of its suspensions and its 16-inch tires with high sidewalls. The ground clearance of 21 cm also allows it to climb anything other than sidewalks… Note, however, a relatively pronounced roll during the sequences of dynamic turns, without however the driving precision being really undermined. Finally, the steering is a little too flexible and does not offer a feeling enough to really feel all the roughness of the road.

A word on the driving aids which are almost non-existent, except for a speed limiter and cruise control as standard, as well as an automatic emergency braking system as standard. The reversing camera – whose image quality is rather poor – is required and the blind spot alert is an option.

The Duster offers the My Dacia mobile app free of charge for life, available on iOS and Android.

This rather basic application which applies to the entire Dacia range allows you to have an inventory of your vehicle as well as data related to driving (eco-driving advice). The owner will be able to geolocate his Duster and see points of interest (POI) displayed around the vehicle.

On the other hand, no function related to locking/unlocking is provided, nor activation of the remote alarm.

Like any application offered by a manufacturer, vehicle maintenance and appointment reminders with the dealer’s workshop are provided.

Also note a “Resale assistance” tab with an updated estimate of the price of the vehicle.

How does grading work?

If the Dacia Duster is well placed at the sales box office, it is because despite its obvious rusticity it knows how to take advantage of the essentials. Its 130 hp engine proves to be sufficient for all-comers and above all demonstrates an interesting sobriety despite the size. Obviously the Dacia Duster is not free from flaws, with an all-plastic finish and a dated interface, but its price placement is still and always an argument on its own.

See also  The Egyptian pound continues its gains for the second day.. It rose to the top of a month against the dollar