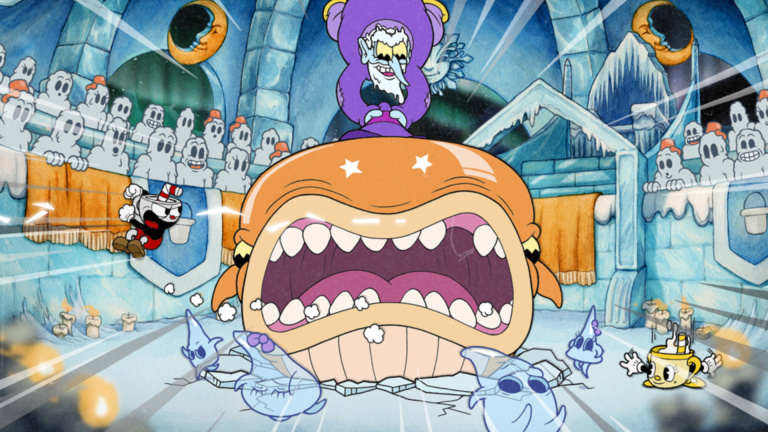 After a very long wait, Studio MDHR is finally paying its ultimate tribute to 1930s Disney with Cuphead: The Delicious Last Course DLC. Players will soon be able to rediscover the colorful and unforgiving world of Mugman, Cuphead and their new ally. To fill the wait, we invite you to take stock of one of the big releases of this month of June.

What is the story behind Cuphead: The Delicious Last Course?

After facing the devil himself, the two brothers Mugman and Cuphead embark on a new adventure, this time to help the Legendary Chalice. This spectral benefactress hopes to find her body and to do this she relies on Chef Lasalière. Specialist in pies of all kinds, he obviously knows the recipe to bring it back to life. But for that, he needs special ingredients found on a new Watercolor Island. To recover them, of course, it is not enough to go picking them, but to overcome bosses, each tougher than the next.

Who is the new playable character in this DLC?

The Legendary Chalice isn’t one to let itself be saved by doing nothing. It is she who will accompany Cuphead in this new adventure, under the name of Mrs. Chalice. And this new character takes with him new abilities and movements. Mrs. Calice can indeed perform double jumps and parry easier to make and has one more hit point than Cuphead and Mugman. According to feedback from those who have tried the game, her abilities make Ms. Chalice a more approachable character and could well save you a good number of deaths.

Note that if you purchase The Delicious Last Course DLC, you will be able to embody Mrs. Chalice in the levels of the base game. Something to relive the Cuphead experience from a new angle.

Where is Cuphead: The Delicious Last Course taking us?

Cuphead : The Delicious Last Course nous embarque sur a brand new Watercolor Island. On this piece of land, five bosses raging, ranging from Esther Winchester to the chilling Mortimer Freeze. We should also find episodes Run & Gun in order to breathe a little (in theory) between each boss. The studio promises us a particularly rich and interesting island to explore.

What’s new for this DLC?

In addition to novelties involving Madame Chalice and the new island, this DLC also includes new charms. Thus, the Heart Ring will allow players to recover a life point on the first, third and sixth parry successful. The Astral Cookie is the one that allows Madame Chalice to take human form. As for the Broken Relic, we don’t yet know what it can be used for.

Another small novelty: the bosses work differently. Some will no longer just transform with each new phase. This time, the decor will also change. This is particularly the case for the fight against Mortimer Freeze which takes place in different arenas. Apart from that, we find the demanding and rhythmic gameplay that had established Cuphead as a very good model of shoot’em up. Note also that most of the bosses and other settings present in the DLC had initially been considered during the development of Cuphead. It is also to finally bring them to life that the MDHR studio was so keen to set up The Delicious Last Course.

What is the lifespan of Cuphead: The Delicious Last Course?

Based on early feedback, you’ll need around three to four hours to complete the DLC in a straight line. Indeed, if the latter is limited to a single island, it is the largest ever made by the MDHR studio. It should thus offer several side quests and will allow us to admire as many animation images as for the basic game.

As a reminder, this one was crossed in about ten hours. Add to that the fact that the DLC will be available for the modest sum of 8 dollars (or less than 10 euros) and you have a particularly profitable DLC.

A DLC as big as the base game? What setup?

When is Cuphead: The Delicious Last Course released?

Cuphead: The Delicious Last Course will be released on June 30 on PC, PS4, Xbox One, Nintendo Switch and even Mac. Note that this is an interesting detail since the initial title from the MDHR studio was released on PC and Xbox One before arriving on other platforms a few years later. To buy it, you will have to wait until this date since the game does not benefit from pre-orders.

Why so much waiting for this DLC?

Announced shortly after the release of Cuphead, The Delicious Last Course will have taken nearly five years to finally see the light of day. If it was notably postponed because of the Covid19 pandemic, Maja Moldenhauer, the executive producer of Studio MDHR, made it a point of honor not to fall into the crunch which nevertheless hits so many studios. As the DLC grew, the work required became more extensive and instead of forcing her teams to get into the nails, she opted for another way of doing things: work at your own pace and without pressure to let the creative spirit of developers and other artists speak freely. It is this state of mind and the desire to do things well that have caused this long wait, and it is therefore ultimately for the best.

What future for the Cuphead license?

With this DLC, a page will turn for the MDHR studio. The title should indeed no longer see the arrival of new content or a sequel. LThe raison d’être of this DLC was the various works started that could not be implemented in the base game. Today, nothing remains on the MDHR studio desks, not even a small sketch lost in a corner. Nevertheless, the studio was founded to create Cuphead and has only had eyes for the title since 2010, so the question of what’s next arises. It was with IGN that Maja Moldenhauer confirmed that this was probably the end for Cuphead, but that it did not mean the end of the studio. Its members will continue to work on 2D projects with old-fashioned animation as they know how to do so well. We therefore look forward to seeing what they have in store for us in the years to come.

As for the Cuphead universe, it’s not dead yet. Indeed, season 2 of The Cuphead Show will land this summer on Netflix. If all goes as planned, Cuphead, Mugman and Mrs. Caline should therefore continue to enchant us for a good little while. As a reminder, the creators of the series have in mind a project of about forty episodes in all, divided into four seasons.