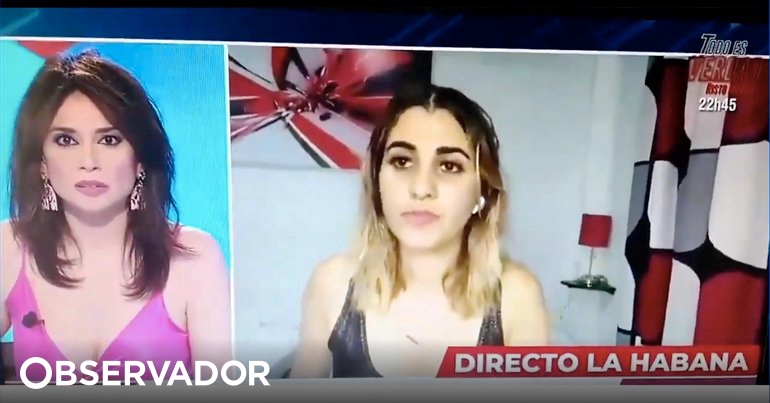 The youtuber and Cuban activist Dina Stars was arrested this Wednesday in Cuba while giving an interview to Spanish television. The arrest comes at a time of heightened tension in Havana, with the non-governmental organization Human Rights Watch estimating that at least 150 people have been detained since protests against the regime began last Sunday.

Journalist/human rights activist being arrested in Cuba in the middle of a live for reporting on the protests.

I’m not seeing the corporatist empathy that makes all the media come together to repudiate attacks on press freedom.
pic.twitter.com/Y28CApE2cv

Dina Stars, who began by saying that she was not afraid to talk about the situation in Cuba, was giving an interview to Spanish journalist Marta Flich, on the program Todo Es Mentira, on Cuatro channel, when she suddenly interrupts the conversation and says which has the police at the door. YouTuber goes out for a while and then comes back to deliver a message: “I hold the government responsible for everything that might happen to me. I have to go, they told me to accompany them.”

⚠️⚠️The Cuban influencer is transferred @dinastars_ to the Zapata and C station … his friends go behind to ask for his release.#SOSCuba pic.twitter.com/Xx4cvoPtQC

In another video, Dina Stars appears accompanied by two men, apparently police officers, heading towards a car. After this, his whereabouts are unknown so far.

On Sunday, thousands of Cubans took to the streets to protest against the government and demand “freedom!”, an unprecedented day that ended with dozens of arrests and clashes after President Miguel Díaz-Canel turned to television to appeal to his followers. supporters who took to the streets to confront the protesters and defend the Revolution.

The non-governmental organization Human Rights Watch (HRW) denounced this Tuesday that detainees in the demonstrations in Cuba “topped 150” and demanded an end to human rights violations on the island.

“The initial lists of detainees at the demonstrations in Cuba exceed 150”, wrote José Miguel Vivanco, director of HRW for the Americas on the social network Twitter, who also warned that “the whereabouts of many are unknown”.

The initial lists of detainees in protests in Cuba exceed 150.

The whereabouts of many of them are unknown.

We demand that these human rights violations cease.

Protesting is a right, not a crime.

Vivanco stressed that “to protest is a right, not a crime”.

In addition, it released a list of missing persons whose authorship it attributed to the non-governmental organization (NGO) Cubalex, which reports 171 missing persons, of which 17 have already been released or their whereabouts are known.

The list includes, in addition to the people’s names and surnames, the place where they were last seen, the time and date of arrest, and the “last report” on their situation.

Director Yunior Garcia, one of the leaders of the 27N movement — created after an unprecedented demonstration by artists on November 27 to demand more freedom of expression — was also arrested on Sunday and released on Monday afternoon.

Garcia used his Facebook social network account to report his experience, explaining that he traveled on Sunday with a group of friends to the Cuban Institute of Radio and Television (ICRT) to ask to speak for 15 minutes in front of the cameras.

“A crowd of radical conservatives and various Rapid Response groups (undercover security forces) told us we couldn’t do it (…) and we were forcibly dragged into a truck like bags of rubble,” he said. the director.

Without Castro in power and with access to the internet, Cubans claim what the revolution promised them

The demonstrations, the most expressive in Cuba since the “Maleconazo” of August 1994, take place at a time when the country is plunged into a serious economic and health crisis, with the Covid-19 pandemic out of control and a serious shortage of food, medicine and other staples, as well as long power cuts that have become routine.

“I spend days without sleep.” With internet cut in Cuba to quell protests, Cubans in Portugal despair for news from families

Meanwhile, White House spokeswoman Jen Psaki denied that the US is involved in organizing the demonstrations and that the US embargo (since 1962) is fully responsible for the economic and health crisis caused by the protests.

Violence and detentions of Cuban protesters & disappearances of independent activists — including @cocofarins, UNPACU’s @jdanielferrer, @Mov_sanisidro, @LMOAlcantara & @Omnipoeta — remind us that Cubans pay dearly for freedom and dignity. We call for their immediate release.

Julie Chung, US Assistant Secretary of State for the Americas, also denounced, in her Twitter account, “the violence and arrests of Cuban protesters, as well as the disappearance of independent activists, including Guillermo “Coco” Fariñas, José Daniel Ferrer, Luis Manuel Otero Alcantara and Amaury Pacheco.