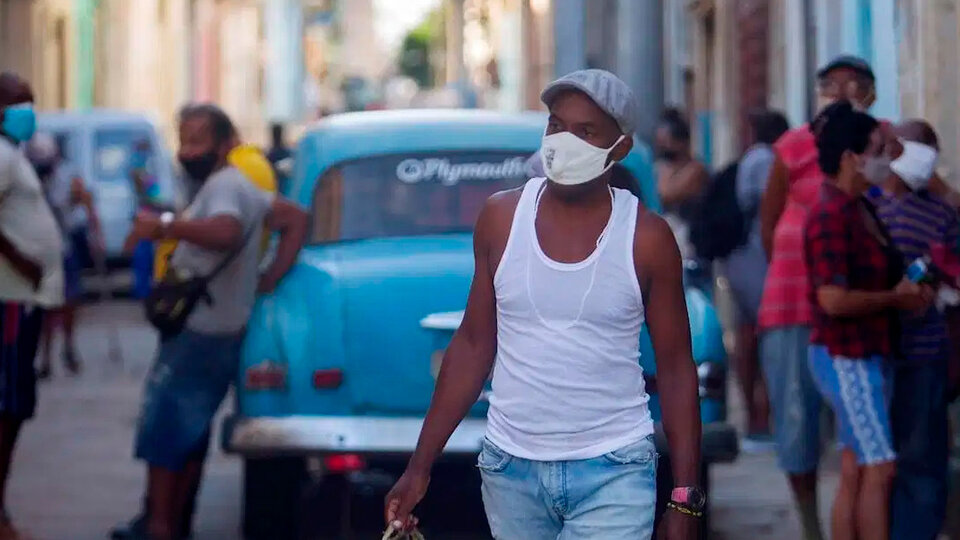 After days of protests, the Government of Cuba announced the free import of food, medicine and hygiene products by travelers Y a restructuring of state-owned companies. The announcement was made by Prime Minister Manuel Marrero in a context of pressure from the United States, a country that the Cuban authorities point to as the instigator and promoter of the mobilizations.

“A person can bring the amount of food, hygiene products and medicines they want”

The decision released by Marrero implies that a new tariff treatment is given to food, medicine and cleaning products that bring passengers in their private suitcases.

“This means that one person can bring the amount of food, hygiene products and medicines they want. The limit is not set by the country or Customs, but by the airline in which it travels ”, explained Marrero.

The measure will be of a provisional nature andIt will be in force from next Monday until December 31, date on which the results of the new policy will be evaluated. Until now, Cuba allowed the importation of up to 10 kilos of these products without charging tariffs.

Marrero clarified that those who want to make use of this benefit they must differentiate the products inside the suitcases and do not mix them with the rest of the luggage content.

“The regulations established by the phytosanitary and veterinary authorities are maintained, for certain products that may involve risks of introducing diseases that affect the health of people, animals or plants, “said the prime minister in the Round Table program.

Marrero pointed out that due to blocking suffered by the island, there has been a significant lack of medications, especially antihypertensives, antibiotics, analgesics, anxiolytics, contraceptives, vitamins and products for stomatological use.

“And so many insist on trying to sell that matrix of opinion that there is no blockade in Cuba,” said the prime minister and assured that the purchase of supplies has been prioritized for cases of coronavirus. The measures adopted will minimize the impact. We still cannot say that there will be a stability in the supply of medicines, but we will continue to prioritize this issue. “

On the other hand, the Executive also announced changes in the country’s wage policies, as part of a far-reaching transformation in the state business sector.

Also in a Round Table, the Minister of Economy, Alejandro Gil Fernández, revealed that “The salary scale in the socialist state enterprise will be gradually eliminated, increasing its autonomy and improving the income of its workers.”.

Gil Fernández said that this measure is not made “so that from the day the company enters the system, all workers earn more, since It will continue under the same principle that you earn more the more wealth you create, the more efficient you are and the more you contribute to the State, with a pattern of reasonableness and economic sense ”.

The campaign against the Revolution

During these last days, there was a drop in Internet services. The Minister of Foreign Relations, Bruno Rodríguez, said that “it is true that there is a lack of (mobile) data, but there is also a lack of medicines.”

The chancellor blamed the United States government for the protests this week, especially having carried out a campaign through Twitter under the hashtag #SOSCuba.

Rodríguez denounced that the hashtag #SOSCuba was launched since June in New York to try to obstruct the pronouncement of the United Nations General Assembly against Washington’s blockade of Cuba. For the first time in history, the Assembly voted en masse in favor of lifting the blockade and there were only two votes against: the United States and Israel.

The chancellor revealed that the users of the social network who most used the labels #CanalHumanitarioCuba, #SOSCuba and #SOSMatanzas are coordinated by ProActiva Miami, an organization that supports the Cuban opposition from that city in the United States. ProActiva Miami, added Rodríguez, received funding from the Florida Department of State last month.

Meanwhile, in the United States, the mayor of Miami, Francis Suárez, a Republican lawyer and son of Xavier Suarez, the first mayor of Miami born in Cuba, has encouraged protests and assured that he will ask President Biden to carry out air strikes on the island. .

“What should be contemplated now is a coalition of potential military action in Cuba.”Suárez pointed out.

White House spokeswoman Jen Psaki said there is a “comprehensive review” of policy toward the Caribbean country underway by the Biden administration.

The protests “have largely stopped due to the violent repression and retaliatory measures of the regime against Cubans in the exercise of their fundamental and universal rights,” said the spokeswoman, calling the situation “unacceptable.” “We will see how things unfold in the next few days, “concluded Psaki.