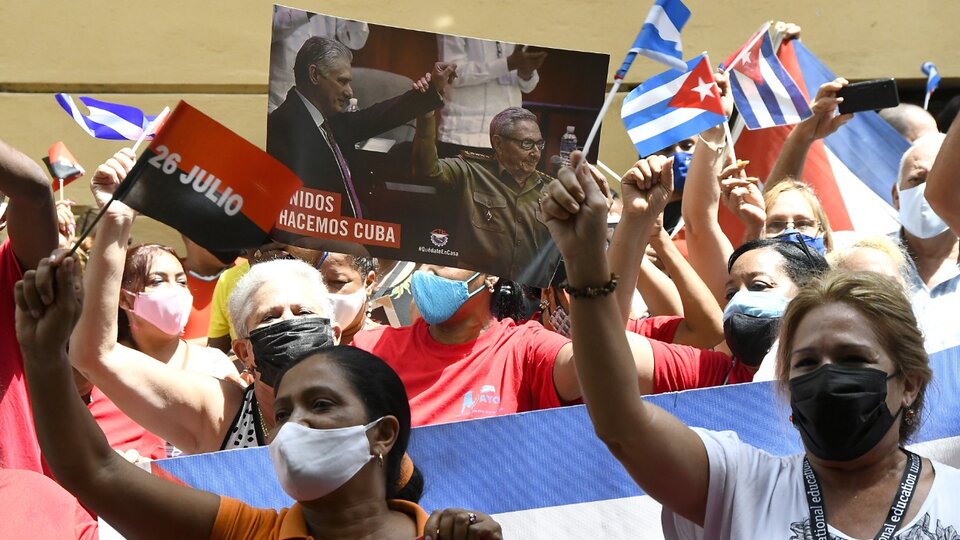 Nothing in Cuba can be explained today without the intensification of the blockade to which it is subjected by the United States. This unilateral measure, defeated in 29 successive votes in the United Nations, which spans two centuries and is close to six decades, reveals the context that today is breathed in its streets. One dead (Diubis Laurencio Tejeda, 36), an imprecise number of detainees depending on who is counting it, injured among protesters and also among defenders of the Revolution, marches and countermarches, occurred mainly in Havana and in other parts of the country . The government in the voice of its chancellor Bruno Rodriguez Parrilla He denied that “a social outbreak had started on Sunday the 11th.” But opponents on the island and abroad believe they are on the threshold of a Counterrevolution. The world suddenly stopped looking at what is happening in other countries to position itself on the Cuban reality. With all that that implies: the media power plants in operation that call for the “fall of the regime” and the bet to produce meaning in social networks as if it were a Caribbean “spring”.

While Joe Biden denounced on Tuesday the 13th a campaign by the Republican Party to restrict the vote of Hispanic and African-American minorities in the United States, the State Department spokesperson, Ned Price, asked that Cuba “release any detainee for peacefully protesting.” The president of the main world power admitted restrictions on civil rights in his own country, but Cuba never ceases to be a monothem of US foreign policy. In the real and virtual world, the interference of the White House did not change almost anything when compared to the Democratic administration with the government of Donald Trump. The mogul’s bombastic and confrontational style is hardly lacking.

But this time it was as if Cuba’s detractors had waited for the precise moment to proclaim a change of era. Perhaps because they believed that the situation of urgency experienced by the Cuban people had matured. That which always seemed the blocking strategy. The greater the suffocation, the more chances of interference. In the midst of the usual hostilities that the island endures, they also thought that the majority support for the Revolution had waned. And they took to the streets, at the cost that – with certain informative inaccuracies – is already known: the murder of the young Tejeda in the Havana neighborhood of La Güinera, plus a number of wounded and detained without official confirmation.

By the way, still too far from the scenario we saw in Chile, Bolivia and Colombia not long ago. But in the middle of the pandemic that increased the statistics of infections and deaths on the island and without key inputs such as respirators. Not even so, the prestigious Cuban medicine could stop a third wave due to the Delta strain.

It is difficult to find informative equanimity when it comes to Cuba. There are the international agencies that never mention the policy of meddling in the internal affairs of the island. A look that focuses on the dominant media in the United States, Europe and Latin America. Right-wing politicians enjoy this platform of doctrine. Since Mauricio Macri – yesterday he got involved again with a tweet: “#SOSCuba, we are with you” – a Isabel Diaz Ayuso, the president of the Community of Madrid and referent of the PP who also spoke out against Cuba.

But the voices of support for the Cuban government and people do not appear in those media. With fewer resources, the official media Granma Y Latin Press cited the support received: from the Chinese Foreign Minister, Zhao Lijian, Russian Vice Foreign Minister Sergei Riabkov and the voices of Latin American presidents or leaders. Alberto Fernández, Andrés López Obrador, Nicolás Maduro, Lula and Evo Morales, were the most expressive in their criticism of the blockade formally imposed since February 7, 1962, when it was declared John F. Kennedy. The former Brazilian president commented: “Biden should take advantage of this moment to go on television and announce that he will adopt the recommendation of the countries at the UN to end this blockade.” The United States seems very far from approaching that position of reparation for Cuba, which has already lost 147,853 million dollars.

The invisibility of these data would be as if the death of a single Cuban was hidden. That of Tejeda or any other ordinary citizen in a Havana suburb, such as those who were lost at sea due to the aggressive US policy to encourage the rafters and those of the athletes who were traveling on the Cubana plane when it flew up in the air in a bomb attack planned by the anti-Castro Luis Posada Carriles placeholder image. Next October 6 will mark 45 years of that attack. Its ideologue died free in Miami, the city from which the tweeting conspiracy that sparked the uprising denied by Foreign Minister Rodríguez Parrilla began.

The death and the arrests that the government admitted, and that are seen in several videos, also motivated a pronouncement by the Cuban church. This, according to AFP, said that the government “has tried to take measures to alleviate the aforementioned difficulties”, but “defended that the people have the right to express their needs, desires and hopes.” A sector of the church in the United States also spoke out. The Archbishop of Philadelphia, Nelson Perez, and three other Cuban-American bishops signed a document that says: “As Cubans and as bishops of the Catholic Church in the United States, we are always aware of the constant suffering and frustration of our brothers and sisters on the island.”

Among those injured by the incidents there are also victims among those who defend the Revolution. The teacher Reinaldo Rosado Roselló, from the University of Informatics Sciences (UCI), received a couple of stones to the head that almost made him lose an eye. Your photos were posted on the site Cubadebate. His statements also: “I never thought that in Cuba we were going to reach what was lived. Many colleagues received blows to the feet, the ribs, the face … A teacher from the UCI had her head split and they had to give her four stitches ”.