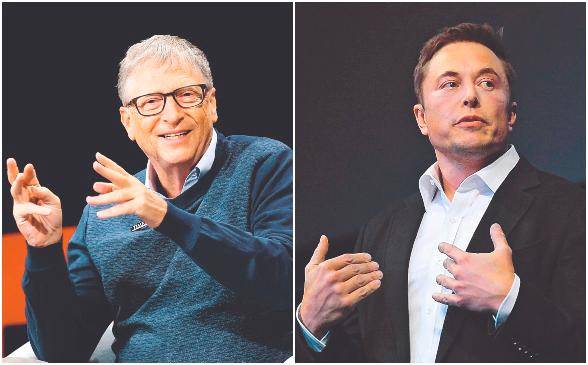 The market is diverse, and what for one of the richest men in the world may be a strategic investment, for another, equally important, it is a farce. That happens with cryptoactives, among which Bitcoin stands out, which today has Bill Gates, founder of Microsoft, and Elon Musk, of SpaceX and Tesla, on two shores.

Not only they have talked about crypto assets, just at a time when there is talk of the “crypto winter”, which already seems like a never-ending storm and that has generated millionaire losses not only to the great fortunes such as those of the CEO of Binance, Changpeng Zhao, but to small merchants.

Billionaire Bill Gates ruled out cryptocurrency projects, such as those tokens non-fungible, Calling them shams “based on the dumbest theory”, thereby reviving his past criticisms of digital assets.

“Obviously, expensive digital images of monkeys are going to make the world a lot better,” the Microsoft founder sarcastically said while speaking at an event in Berkeley, California, hosted by TechCrunch.

Gates has criticized cryptocurrencies before, arguing with Elon Musk last year over whether Bitcoin is too risky for retail investors and the environmental damage of coin mining.

For example, in a February 2021 interview, the Microsoft founder warned that he was concerned that people would get into “manias” when they “don’t have that much money to spare”: “My general thought would be that if you have less money than Elon ( Musk), you should probably be careful.”

Also, during an Ask Me Anything on Reddit earlier this month, said he prefers to invest his money “in things that have a valuable result”: “The value of companies is based on how they make great products,” Gates wrote.

“The value of cryptocurrencies is just what someone else decides someone else will pay for them, so it doesn’t add to society like other investments,” he explained.

Musk, for his part, has been a defender of this type of investment, in fact Tesla is the second company with the most Bitcoin in the world, it already has 43,200 bitcoins on its public balance sheets, and is only preceded by MicroStrategy which has in its power 129,218 bitcoins, according to Statista Digital Economy Compass 2022.

The effervescence that crypto assets had in the last two years is gradually diminishing its effect; In March 2020, bitcoin was valued at around US$5,000 and by November 2021 it was above US$64,000, when it reached its ceiling in market value and began its vertiginous collapse.

And after the currency crash, Musk has not only had to take his losses, but now faces legal trouble.

The billionaire and his companies SpaceX and Tesla were sued last Friday by an investor demanding US$258 billion to repair damages they received after allegedly falling victim to a pyramid scheme to support the Dogecoin cryptocurrency.

US citizen Keith Johnson filed the lawsuit feeling defrauded by the tycoon and his companies, which in his opinion constituted an illegal organized crime company to inflate the price of Dogecoin.

The thing is, since Musk started promoting the virtual currency, hosting it at Tesla and naming one of his satellites Dogecoin at SpaceX, investors have lost about $86 billion, Johnson estimates. He would like Musk to reimburse them for this sum, in addition to paying twice as much in damages: some $172 billion.

See also  CES 2022: opens the largest technology fair with the metaverse, the food of the future and the NFTs as protagonists | Digital Transformation | Technology

“Defendants were aware as early as 2019 that Dogecoin was worthless and yet promoted it for profit… Musk used his pedestal as the world’s richest man to operate and manipulate the Dogecoin pyramid scheme for profit, exposure and fun,” the suit says.

In months it will be known if the demand prospers, and if Musk’s wealth grew at the tip of crypto assets that few today bet on