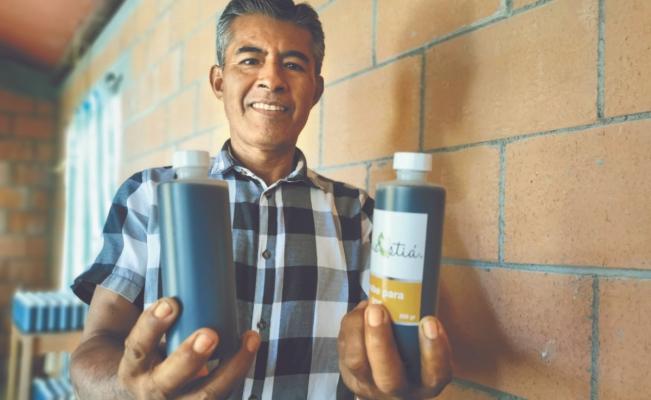 Covid-19 gives new life to Jarabe de Morro, a traditional medicine from the Isthmus of Oaxaca

Tehuantepec.— As a result of the Covid-19 pandemic, the demand for nose syrup for the cough soared like a alternative medicine in the Isthmus of Tehuantepec, a naturopathic remedy that has always been used to calm asthma and bronchitis, especially in children.

Alejandro Ramírez is one of the producers that exist in the region and who is in charge of making the syrup in an artisanal way. He is a massage therapist who 20 years ago trained as a health promoter, from the Popular Center for Health Support and Training (Cepafo) of the Diocese of Tehuantepec, so two decades of work in traditional medicine both in Oaxaca as in Guerrero they support it.

The production of cough syrup is carried out for the alternative medicinal proposal Guie ‘Stiá, created in Unión Hidalgo by the teacher and defender of the territory Rosalba Fuentes. The main ingredient in the syrup is the pulp and rind of the fruit of the Morro tree, named in the same way.

The nose is a semi-spherical green fruit with a hard rind, which does not exceed 10 centimeters in diameter. Inside it contains a white mass of semi-woody consistency with a semi-sweet flavor, known among the Zapotecs as bitu xiga / morro.

The tree exists throughout Mesoamerica and the Caribbean, but in the Isthmus it is at risk of extinction, despite the fact that it was always present in daily life as a medicine, as a utensil, toy and handicraft. Thus, it is increasingly difficult for Alejandro to find this fruit because the trees have been cut down.

“Every time I find it hard to find the hill trees. There were two near Tehuantepec, but the last time I went and they had already cut them down to build houses, it was a great shame. I have gone to Magdalena Tequisistlán in search of the fruit. But not only the hill is in extinction, but also other plants that are used in the production of syrup ”, explains Alejandro in an interview with EL UNIVERSAL.

Some traditional Juchitán doctors prepare the syrup de morro with the small variety (flat nose), to attack dry coughs. To obtain the syrup, they make a mixture of the pulp with ocote, royal sage, eucalyptus, arnica and armadillo shell powder, in addition to sweetening it with honey. You can also get a chronic cough tonic.

In his case, Alejandro uses his own formula that they have perfected in Guie ‘Stiá for 18 years: water, nose, eucalyptus, mullein, purple bougainvillea, garlic, chamomile, cinnamon, sugar and 96 alcohol. To produce 20 or 25 liters of syrup takes a minimum of two days full time. Add to that the two days it takes her to collect some of the ingredients in the field.

The domestic chemical process that the preparation undergoes takes one more day. This includes boiling the plants for 20 minutes, cooling them, then placing and squeezing them; a measurement is made and the sweeteners are added. Then it is mixed with the ingredients of the nose (pulp and skin) and boiled again for 20 to 40 minutes to the point of syrup, removed from the heat and allowed to cool.

See also  Lhyzeth's fight against black fungus is complicated by lack of medicines, they cost up to 30 thousand pesos

In the last stage, the product is allowed to cool, it is measured again and alcohol is added as a preservative; bottling and labeling enters another process in the production chain that takes place at the Guie ‘Stiá facilities.

Alejandro comments that over time, the cough syrup will also become extinct due to the displacement of the medicine created by pharmaceutical companies and the great work that its preparation requires, but today it is once again present as an alternative proposal in homes, especially in the face of Covid-19.