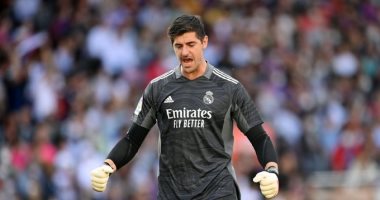 Courtois: I can’t believe what I did in front of Mohamed Salah’s shots.. it was crazy

The Belgian giant, Real Madrid goalkeeper Thibaut Courtois, spoke about his brilliance against the shots of the Egyptian international Mohamed Salah, the player of the Liverpool team, in the match that brought together Meringue and the Reds, at the Stade de France, in the Champions League final..

Real Madrid won the Champions League title, after beating Liverpool with a goal without a response, scored by Brazilian Vinicius Junior, and the giant Courtois saved more than 7 balls for the Egyptian star..

Courtois told Real Madrid’s official website, “I said before the match that Real Madrid would win. Many criticized me, but we showed who is the king of Europe.”“.

Courtois added, “I feel happy this season, we did a great job, as soon as I saved the first shot, I focused more and then I saved the shots of Mohamed Salah and Sadio Mane.“.

And the Belgian goalkeeper continued, “I was looking forward to winning the Champions League, for the sake of my family, my girlfriend, my parents and my children.“.

Courtois confirmed that “Mohamed Salah’s shots were the most difficult challenge in the match because he had to move away a lot to counter his shots, it was crazy, I can hardly believe it.”“.

The Belgian giant, Thibaut Courtois, the protector of Real Madrid’s den, played an important role in crowning his team with the Champions League title this season. Courtois participated in 13 games this season in the Champions League, during which he achieved 62 saves, netted 5 times, and conceded 14 goals, The farthest 5 balls with the fist, and his passing accuracy reached 77%.