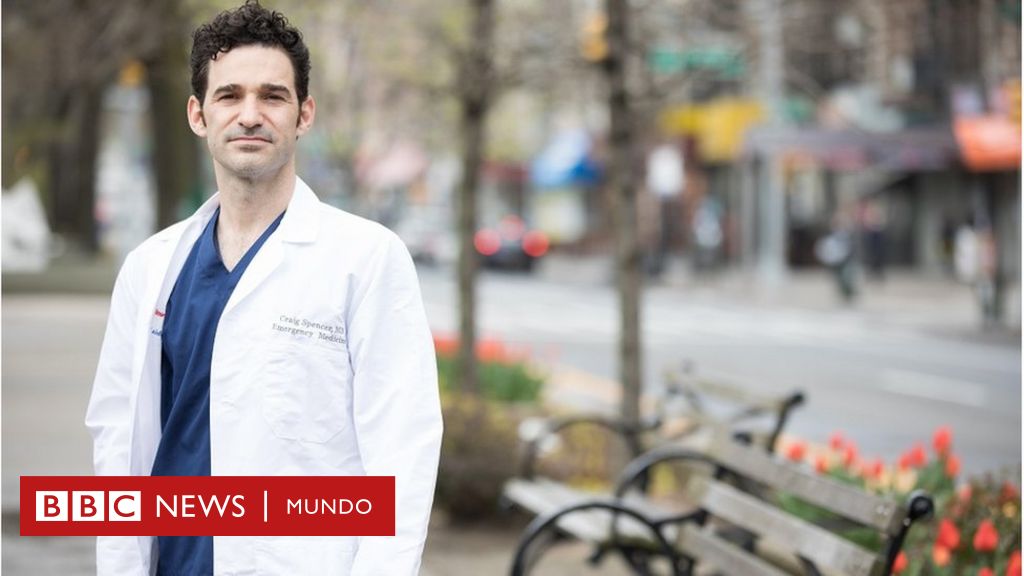 Coronavirus in the US: “I’m a doctor in New York and I don’t remember when was the last time a coronavirus patient died”

For almost a year, it was the global epicenter of the pandemic.

The numbers of deaths and new cases of coronavirus in the United States, as is still the case in most Latin American countries, accumulated in unfortunate balances that added new records every day.

The reality there, however, is now completely different.

During the last months, the high doses of vaccination have resulted in a notable decrease in infections and deaths.

And consequently, for the first time in more than a year, in almost the entire country they have stopped requiring the use of masks, parties and concerts are held, restaurants and planes are full and the covid rooms of hospitals begin to empty or close.

But how has this changed everyday life for people? How are some of those who saw their lives and their jobs on the edge now in the toughest moments of the pandemic?

At BBC Mundo we tell you the stories of three of them, which, perhaps, could be that of many in other countries as vaccination progresses.

I am a doctor in an emergency room in New York City and I have not seen a covid-19 patient in over a month. I don’t remember when was the last time a coronavirus patient died on one of my shifts.

It feels great when my work goes back to what it was.

Now that I look at it in perspective, there was no way to really prepare for what would hit our emergency room, first here in New York, and then across the country.

On March 1, 2020 I remember that there was only one case and a week later, almost all the cases that arrived were from coronavirus.

We still didn’t have enough tests to do and we had this huge and incredible mass of patients who came in minute by minute, hour by hour.

In most cases, in an emergency room, it is generally rare for someone to die on you. Most days at my job I didn’t have to turn on a ventilator and intubate a patient.

But during the coronavirus it happened every time I went to work. I had five or six people in shifts who died in the emergency room and you didn’t have time to process because so many serious patients were coming in that you couldn’t stop.

We worked to save lives, we did everything we could, but during those weeks in New York, there were so many cases and such serious patients that many times our efforts were in vain.

For us it was very exhausting, both physically and mentally. And it went like this in shifts and shifts for weeks and weeks. Sometimes I would walk to work and feel like I was walking towards the apocalypse.

The cases that make it to the emergency room are more the kind of things we used to see: sprained ankle, strokes, heart attacks …

I know that this is not the end of the covid, of that there is no doubt. We will have more cases and deaths. There are new strains … but nothing we saw last year will happen again.

Now we know the disease better, we are better prepared and we have the vaccines. I am also vaccinated, so the risk for me is also lower.

What if my job is more boring now? I would say that it has returned to be normal, as it was before.

And that’s okay. It is what we are used to. That’s the way I like it.

Yuan-Qing Yu, violinist with the Chicago Symphony Orchestra and professor of music at Northwestern University

My name is Yuan-Qing Yu. I am a violinist and a teacher and my first concert after the coronavirus was last week: it had been 460 days since I had last played for a live audience.

I still remember when the lockdown started.

We had a concert scheduled that night with a great program at the Chicago Symphony. I was leaving the house when a colleague called me and told me that the concert had been canceled.

Since then my life was on a hiatus, everything I did, the theaters I went to, the events I participated in, were canceled.

I also had to go through the process of teaching classes online, trying to find ways to keep my students glued to a screen.

It was not easy at all. I spent several weeks mentally adjusting.

The return to live music was progressive. A few months later, we were able to play again, but they were online concerts, each from their home.

By the end of the year we were able to play all the musicians together again, very distant and with a mask, but without an audience. And it felt good, because I was with my colleagues, but I didn’t have the possibility to play for my audience.

Last week, when I played again, it was a monumental occasion for me …

When you have an audience in front of you, you focus not only on precision, but on the energy and excitement of the nature of the live concert.

When you are playing in front of an audience, as a musician you feel the energy of the people who are watching you. Even if in our concerts the audience is only going to listen, the musicians feel their presence, we feel their breath, how they react to the intensity of certain movements.

The first time we rehearsed with the orchestra for that concert it was not very memorable. I thought it was going to be a very dramatic moment after so long …

It was actually something very common: it was a program that we all knew and I did not feel or anything extraordinary happened: it was as it should have been, normal, natural.

But then I understood that something wonderful was happening here: I had not known what it was to feel something normal, something like it used to be for a long time.

The highlight for me was when we returned to play for the public.

It was a different concert: although all the tickets were sold in an hour, many seats were empty to allow physical distance in the audience.

The musicians were further apart than usual and we were all wearing masks. When the lights went out, something happened that will always remain in my memory.

Generally, we musicians receive applause at the end of movements or pieces, but that day, the recording that generally welcomes and asks the audience to turn off their cell phones began by saying: “welcome back.”

It was a lovely moment for me. I remember that I smiled. I felt welcome.

I felt that those of us who were there were lucky. Lucky to be there. Fortunate because despite everything, a year later, we are alive.

Leandro Parreira, purser for a US airline.

For 11 years I began to work as a flight commissioner in my country, Brazil, and three years ago I made my dream of joining one of the great airlines of the United States come true.

It was a tremendous opportunity to meet new places, new people, new cultures, practice new languages, be in a different place every day, with different people …

Just over a year later the pandemic began.

When you work in this industry, you know that there is a daily and timeless threat: from a plane crash to a terrorist attack, some person or group trying to hijack your plane … But you never imagine that something as small as a virus could turn the world – and your work – the other way around.

At the beginning of the pandemic, it was very rare to fly to our destinations. The planes were practically empty: the passengers, who are our reason for working, were not on board. Many times we were just the crew members.

That was just the beginning. Many flights were canceled, many countries closed their borders and there also began the fear that we could lose our jobs.

I was left without flying until last June. I was working as a driver for Uber or Lyft, I tried to study for other things … I didn’t know if I could get on a plane again.

But that bad stage passed.

I’m already working again and people are refilling the planes, traveling on vacation and celebrating. Flights and airports are packed again

It feels so good to be flying again. I feel free again. Now the pandemic seems to be behind us.

You still have to wear masks on flights and that’s uncomfortable for everyone. But after what we went through, that is now the least important.