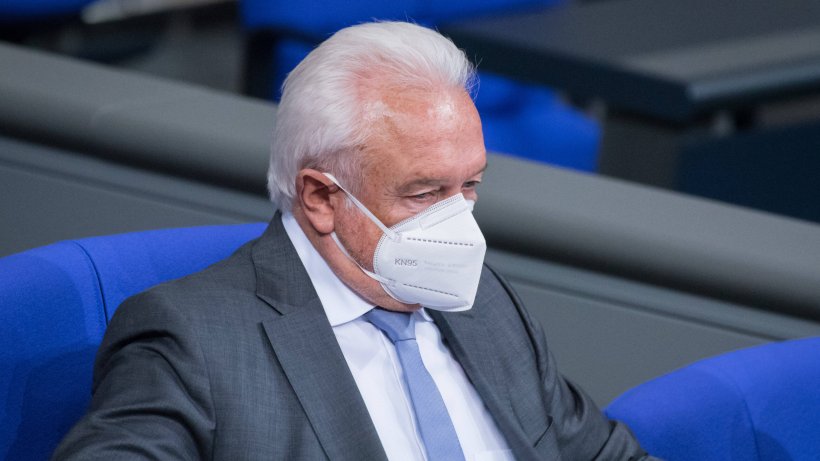 Corona: relaxation of the mask requirement? Kubicki with a clear message

The Corona-The situation in Germany relaxes more and more every day. The 7-day incidence nationwide is currently under 20 – and the trend is falling.

At the same time, every second person will have received at least one vaccine dose over the next few days.

The corona situation in Germany (June 13):

9.15 a.m.: Relaxation of the mask requirement? Kubicki with a clear message

In Germany, despite falling incidences and infections, it is still compulsory to wear a mask in beer gardens, restaurants or many pedestrian zones.

For Bundestag Vice President Wolfgang Kubicki (FDP), this is a clear violation of the Infection Protection Act.

“If the incidence is clearly below 35, the state may not restrict any basic rights for all citizens across the board. The general mask requirement would therefore have to be lifted if the Infection Protection Act is strictly interpreted, especially outside, “says Kubicki to BILD am SONNTAG.” The state governments must now change their ordinances quickly, otherwise they will soon be forced by the administrative courts. ”

In the Federal Republic of Germany the seven-day incidence is 17.3. In only 42 counties and urban districts, the incidence is over 35.

Due to a breakdown in a vaccine plant in the USA, Germany has to forego a large part of the deliveries promised by the manufacturer Johnson & Johnson for the time being.

According to the latest information, the pharmaceutical company will deliver around 6.5 million fewer doses to Germany than planned in the second quarter, said a spokeswoman for the Federal Ministry of Health. “That is unfortunate, because every vaccine box counts. We therefore expect Johnson & Johnson to deliver this amount as soon as possible in July. “

A breakdown at a plant in Baltimore had led to significant delivery problems. Several batches of several million doses each are unusable due to possible contamination, the FDA announced on Friday.

Originally, 10.1 million doses of the vaccine should arrive in Germany in the current quarter according to the delivery forecast published by the Ministry of Health at the beginning of June.

5 p.m.: Investigations against the doctor in the vaccination center

The Berlin police are investigating suspected fraud against a doctor at the vaccination center in Treptow. A local employee is said to have observed the 43-year-old suspect on Wednesday as she allegedly forged blank vaccination cards, a police spokeswoman said on Saturday.

According to the police, the doctor had several blank vaccination cards in front of her on the table. The employee found this strange. She informed the management, which then alerted the police. When the suspects were searched, around 1000 euros in cash were found. It will be determined whether the money is related to the suspicion of fraud, it said. In addition, vaccination records were confiscated that were found at another location in the vaccination center.

The doctor was found in the center in the arena and questioned. The State Criminal Police Office is investigating.

3 p.m .: Karl Lauterbach: Watching packs is no problem, but the health expert warns BEFORE

The EM is coming up, the beer gardens have already set up the public viewing screens. But is that such a good idea with Corona on your neck?

The “Watson” portal asked the SPD health expert Karl Lauterbach exactly that. His clear assessment: “It is crucial that you stay outside. And really outside, without a roof, without cramped areas. The air must be able to circulate. When you’re outside, you can infect others too, but only your neighbors. But there is no longer any superspreading. ”So, in principle, pack gazing is comparatively safe.

It looks different, however, when the favored team scores the decisive point and people suddenly embrace ecstatically. “You can do that. But you risk getting infected and falling ill – and maybe just before the vaccination. Well, I might not do that at this European Championship, no matter which goal is scored. ”Exception: Both people are already vaccinated.

A real travel hammer is looming, and many will be able to take a deep breath with a view of the summer holidays. As the “Bild” reports, Foreign Minister Heiko Maas (SPD) will lift the travel warning for risk areas. This will apply from July 1st worldwide for all areas with a seven-day incidence below 200!

If you come to Germany from non-risk areas by land, you will no longer have to observe any entry restrictions due to Corona in the future, see the “Bild”. This is possible because there will be common rules in Europe when entering and dealing with the 3-G groups (recovered, tested, vaccinated).

After more than a year, the federal government is lifting the general travel warning for tourist trips to corona risk areas from July 1st. “After long months of lockdown, we can look forward to more normalcy, and that also applies to travel,” said Federal Foreign Minister Heiko Maas on Friday about this step, the German press agency also reported.

Due to the falling number of corona infections, the federal government is removing all of Austria and parts of Greece, Croatia and Switzerland from the list of risk areas on Sunday. The Robert Koch Institute announced on Friday. Anyone who comes to Germany from these areas by land will no longer have to observe any entry restrictions due to Corona in the future.

The holiday islands of Madeira in Portugal and Cyprus as well as twelve other countries in the Balkans, Eastern Europe, Asia and North America are also removed from the risk list, including the USA and Canada. In these two countries, however, there is still an entry ban for Germans who do not live there. In addition, the following countries are no longer risk areas as of Sunday: Armenia, Azerbaijan, Bosnia, Kosovo, Lebanon, Moldova, Montenegro, North Macedonia, Serbia and Ukraine. There are also two regions in Norway.

For all of these countries and regions, the Federal Foreign Office does not receive a travel warning. However, the federal government continues to advise against tourist trips abroad. The summer holidays in the first federal states will start in a week.

For most of the Austrian federal states, the classification as a risk area had already been lifted a week ago. From Sunday this also applies to the remaining countries of Tyrol and Vorarlberg. However, anyone entering Austria from Germany must still be able to show a negative antigen or PCR test. This does not apply to anyone who can prove a vaccination or who has already contracted Corona and has recovered.

12:05 p.m.: Infectiologists sound the alarm and warn BEFORE

What happens when Corona is over? Infectiologists are now warning in the “ÄrzteZeitung” newspaper of another danger that could develop following the corona pandemic. The strict hygiene measures during the pandemic could have far-reaching consequences in the aftermath.

During the pandemic, there were hardly any RSV and flu (influenza) illnesses. Mathias Pletz from Jena University Hospital: “Rhinoviruses and endemic coronaviruses were able to persist, but RS and influenza viruses have disappeared.”

The consequence: Due to the strict hygiene measures, the population did not collect any information on how to deal with these pathogens. “This also means that all children born during the pandemic have not yet had any RSV immunity,” said Pletz in the “ÄrzteZeitung” newspaper. Modeling from the USA now indicated that after a weak flu season it would be a difficult season – so that could threaten us this winter as well. Therefore, the doctor urgently advised to also accept the flu vaccination offers.

According to a media report, Federal Health Minister Jens Spahn (CDU) is no longer planning the corona vaccine from the Tübingen manufacturer Curevac for the current vaccination campaign. Spahn said that to the health ministers of the federal states during the last ministerial conference, reported the “Mannheimer Morgen” (Friday edition) with reference to government circles. Accordingly, Spahn spoke of “one of the bigger disappointments”.

Like the Mainz company Biontech, Curevac has developed a modern mRNA vaccine. The Tübingen drug has long been considered extremely promising. As recently as April, the company said it was hoping for approval from the European Medicines Agency EMA in May. The federal government then planned the first vaccinations with the Curevac vaccine for the second quarter of 2021.

The Minister of Health of Baden-Württemberg, Manfred Lucha (Greens) spoke this week of “complications” in the approval process and referred to information from Spahn. Accordingly, the Federal Minister of Health had now named August as the earliest possible time for EU approval in confidential discussions.

As a result of Lucha’s statements, Curevac also corrected his schedule, reported the “Mannheimer Morgen”. A spokeswoman for the company referred to problems with the submission of the final data sets, which the EMA requires for approval. The Federal Ministry of Health apparently drew conclusions from this – and deleted the vaccine from its planning for the time being.