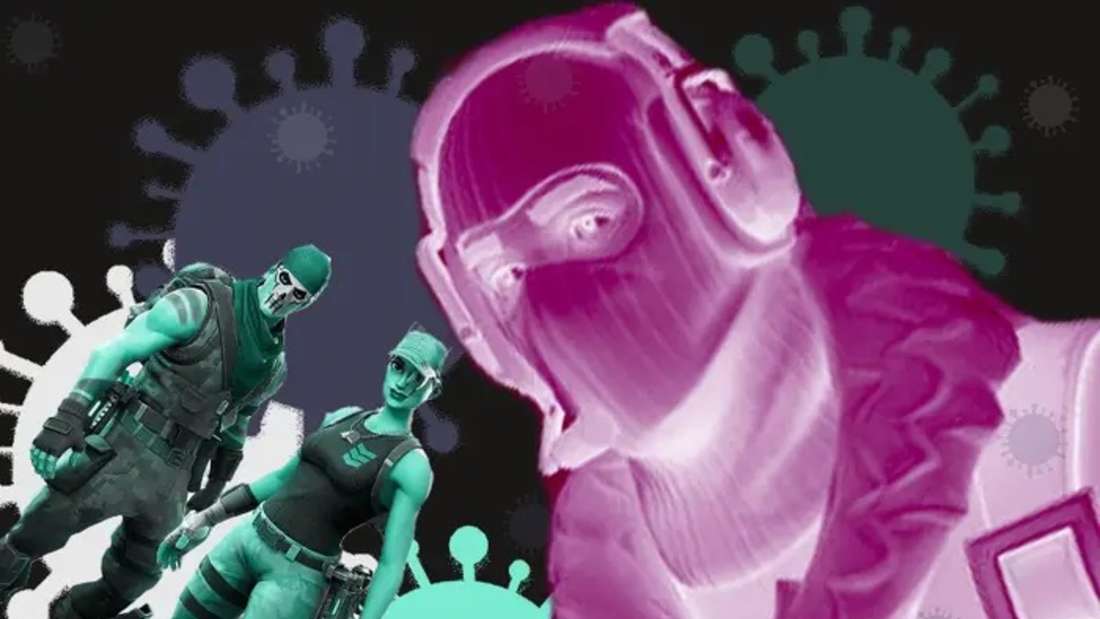 Corona can trigger unusual psychoses, shows the case of a teenager

A corona infection can significantly affect the brain. Now, in a few cases, there has even been a psychosis.

Covid-19 is known to affect the brain, causing a range of symptoms and problems such as loss of smell and taste, headaches, brain fog, confusion and mental health issues such as depression, which are affecting a growing number of younger people.

In some cases, Covid-19 can even trigger psychosis, a loss of reality that manifests itself in hallucinations, delusions, restlessness, paranoia, and sometimes magical thinking. While this is rare even in adults, studies show, researchers in the UK reported an even more unusual case of psychosis in an unvaccinated 16-year-old boy who, according to reports from the American Academy of Pedriatics, due to shortness of breath and chest pains after a Covid infection, was hospitalized.

About a week after his Covid-19 infection wore off, he became restless and believed he had special powers, including the ability to read minds. He also heard and saw hallucinations, including Fortnite-Figures, according to Dr. Zainab Bashir of Queen Elizabeth Hospital Birmingham and colleagues who wrote the report in the journal Pediatrics.

Psychos caused by Corona: Only a fraction of patients developed this complication

Psychosis, while uncommon, is not generally impossible following viral infections, particularly respiratory infections. Other brain-related complications of Covid-19, such as stroke, anxiety, insomnia and confusion, are becoming more common. Long Covid can also occur after an infection and is unfortunately not taken seriously by many doctors.

A study of more than 230,000 Covid-19 patients who became ill in 2020 found that around one in three patients were diagnosed with a neurological or psychiatric condition in the six months following infection. However, only about 1.4 percent were diagnosed with a psychotic disorder. “That happens very rarely. It is a fraction of a part of the patients infected with Covid-19.

But should everyone worry about developing Covid psychosis after infection? No,” says Jonathan Komisar, an internist and psychiatrist at Duke University Hospital who regularly treats patients with Covid psychosis and other neuropsychiatric symptoms related to the disease. Still, “It’s certainly not that rare that you shouldn’t be open to something like this happening,” he said. Incidentally, the pandemic also has effects on our bodies that have nothing to do with Corona.

According to the researchers, what was most striking about the case of the British teenager was that there were no warning signs of the onset of psychosis. (Not to mention he had no personal or family history of psychiatric illness or drug use). The boy was initially hospitalized for five days for Covid-19 and then discharged home. But three days later, his family brought him back because of behavioral problems.

See also  Colors of the homeland | A nutritionist warns of the “invisible killer” in homes: it contains 2 million bacteria

The teenager was unusually anxious, did not speak normally, stripped down to his underwear and verbally abused his parents. At the hospital, the boy said he could see messages written on the ceiling, he broke a glass in the door to escape, and he typed in the air while speaking gibberish. He said the “information system in his brain was erased”. Meanwhile, he refused to let the doctors do tests for fear they would poison him. The boy also expressed suicidal thoughts.

The teenager was committed to an adolescent psychiatric unit and received low-dose antipsychotic medications, which gradually helped him improve and gain confidence in the hospital staff. After three months he was finally released to go home. Six months later he had made a full recovery.

More on the topic of mental health: These different coping mechanisms are involved in dealing with traumatic experiences (and they are all totally okay!)

Psychosis caused by Corona: You should pay attention to these warning signs

“Regardless of what triggers the psychosis, at least we can see that it improves over time and with standard treatment, which I think is important,” said Komisar. “In a way, that’s reassuring.” Mujeeb Shad, a professor of psychiatry at Oregon Health and Science University’s School of Medicine, published a report about three teenagers. These included a 17-year-old patient he had treated who developed corona psychosis three weeks after the positive test. Her symptoms lasted for anywhere from six days to six months.

“This virus is one of the most complex viruses we have ever known and no one can predict which system it will attack the most. be it [zentrale Nervensystem]the kidneys, the lungs or even the skin,” Shad told BuzzFeed News US. It’s almost impossible to tell if someone will develop psychosis or how severe the case will be. But Shad said adults and people with compromised immune systems may be more susceptible.

“This can be kind of a self-limiting process that can drag on for months, but that only happens in a small percentage of a small percentage of people,” Komisar said. “If you notice that family members or children aren’t behaving like themselves or are exhibiting behaviors that aren’t theirs, that should be a red flag and you should get them checked out.”

Some possible explanations for the cause of a corona psychosis

It’s not clear if the virus infects the brain directly, or if it attacks certain immune system molecules, which then damage brain cells, Shad said. The coronavirus is known to enter cells through ACE2 receptors, which normally attach to an enzyme found throughout the body, Shad said, which explains at least part of why the virus can infect almost any cell.

See also  Do you not sleep at night? Discover the causes and some tips to help you fall asleep. |

Understanding the relationship between Covid and psychosis is also difficult because many factors can lead to mental health problems or neuropsychiatric symptoms in general, Komisa says. For example, stress, the abuse of prescription drugs or party drugs, brain damage and of course psychotic disorders or mood disorders themselves. Even commuting can have negative effects on our health.

There doesn’t appear to be a clear association between the severity of an infection and the development or severity of symptoms of psychosis, Shad explained. The 17-year-old he treated, for example, suffered only from mild breathing difficulties, a low-grade fever and fatigue.

One of the theories to explain Covid psychosis is that it invades the central nervous system, with the coronavirus causing direct damage to nerve tissue, resulting in psychiatric symptoms. Or, according to Komisar, the virus could trigger local inflammation in the brain that leads to psychosis.

Another form is an excessive inflammatory response throughout the body. This response pumps an excessive amount of cytokines — proteins involved in communication between cells in the immune system and play a key role in inflammation — into the bloodstream, reducing or blocking blood flow to the brain. (According to National Cancer Institute called a cytokine storm.)

“You can imagine it like friendly fire,” said Komisar. “Your immune system ramps up and begins to mistake normal parts of the brain for infection and attack.”

The corona virus itself can also be the “drop that breaks the camel’s back,” says Komisar. This means that the infection can trigger a psychiatric illness in people with predisposing risk factors. However, due to a lack of data, doctors do not know exactly what these risk factors are.

More about Corona? Interestingly, according to a study, a previous tuberculosis disease could even protect against Covid infection.

Corticosteroids, used to treat a range of conditions including cancer, chronic pain, lupus, asthma and the aforementioned cytokine storm, are known to induce psychosis and other mood-altering effects in some people. They can also make psychosis worse if administered during an episode. None of the Covid psychosis patients reported in the published case reports were taking steroids before symptoms began, but both Komisar and Shad said it’s important to use these drugs with caution.

See also  UK must keep 'eye on the ball' with vaccinations or Covid could 'roar back', expert warns

It is also important to note that people can develop Covid psychosis because of the social and medical stress associated with the disease, and not because of the disease itself. Shad describes two such cases of Covid-related psychosis in adolescents in his report. “We are increasingly learning that the closure of schools and the lack of opportunities to interact with peers has indeed caused significant harm in younger populations, reflected in increased suicidality and increased suicide rates among young patients,” he said. Much stress in everyday life? Meditation offers some health benefits and can have a positive effect on the psyche.

Psychosis or other neurological symptoms after a viral infection are not common, but experts say they do happen. Some of the earlier evidence dates back to the 1918 flu pandemic, one said Frontiers in Psychiatry Article. Some studies even show an association between prenatal influenza exposure and a higher risk of being diagnosed with schizophrenia.

Narcolepsy, seizures, Guillain-Barré syndrome and encephalitis (inflammation of the brain) have also been reported after other outbreaks and pandemics, including the SARS epidemic in 2003, the H1N1 pandemic in 2009 and the MERS outbreak in 2012, such an article of Brain, Behaviour and Immunity Journal.

Psychosis after corona disease: “We are talking about a very small percentage in the general population”

A 2020 in the magazine Schizophrenia Research A published review, which included data from multiple epidemics and pandemics including SARS, Ebola, H1N1 and Covid, found that psychosis occurred in 0.9 percent to four percent of infections.

“The COVID-19 pandemic will provide really important scientific opportunities to learn more about the relationships between viral infections and mental disorders in general, and psychosis in particular,” said Sarah Morris, director of the Psychotic Disorders Research Program at the National Institutes of Mental Health Division Translational Research. “However, it is important not to overestimate the risk. We are talking about a very small percentage in the general population.”

Author is Katie Camero. This article first appeared on buzzfeednews.com on July 12, 2022. Translated from English by Aranza Maier.