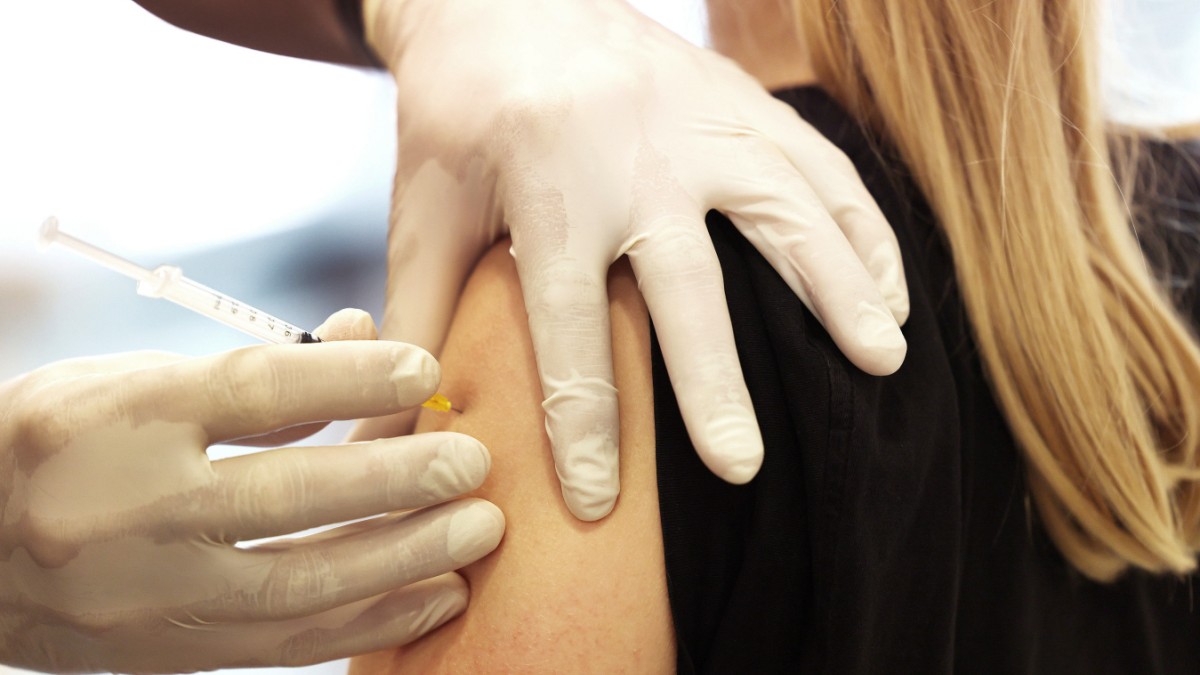 The Standing Vaccination Commission (Stiko) rejects a general Corona vaccination recommendation for all underage children and adolescents. On Thursday, she published her decision that she only advised immunization to previously sick people. The decision was expected. A corona vaccine for 12 to 15-year-olds has only recently been allowed: the vaccine from Biontech / Pfizer. Children and adolescents of this age can therefore be vaccinated; Stiko does not issue approval, only recommendations.

In doing so, she weighs the individual risks of a vaccination against its benefits. Since children tend to be less seriously ill, the benefits tend to be less than for adults. Stiko recommends vaccination for minors only if they have certain pre-existing conditions – such as obesity, heart and lung diseases, kidney failure, cancer or poorly controlled diabetes with an HbA1c value of more than nine percent. And she also recommends it for children and adolescents in whose environment there are people who are not or not well protected by vaccinations – immunosuppressed patients after a cancer or transplant, for example.

This general vaccination recommendation now also applies to 16- and 17-year-olds for whom the Biontech / Pfizer preparation has been approved for a long time. At the same time, healthy minors can also be vaccinated if they or their parents so wish and if they seek advice from a doctor.

RKI boss: “The virus seizes every chance, no matter how small”

For the first time in eight months, the seven-day incidence in Germany fell below the 20 mark. The Robert Koch Institute (RKI) gave the value on Thursday morning nationwide as 19.3 – the last time such a low value was recorded at the beginning of October. A week ago the incidence was a good 34. In total, the German health authorities reported 3187 new corona infections to the RKI within one day. The authority put the number of deaths within one day at 94.

Despite the “pleasing” decline in the corona numbers, the RKI pointed out that the risks still existed. “The virus seizes every chance, no matter how small – we shouldn’t give it to it,” said RKI President Lothar Wieler in Berlin. This can be seen, for example, in care facilities, where, despite the high vaccination rate, there are still unvaccinated people and outbreaks also occur. The pandemic is not over.

Federal Health Minister Jens Spahn (CDU) spoke of an encouraging development with a view to the infection process. The number of infections fell significantly, intensive care units were emptied of corona patients, and the number of vaccinations continued to rise at a good rate. This makes it possible to dare to be more free and normal again. At the same time, it is important to secure what has been achieved and to further reduce the numbers. The deeper you get, the less you give new mutations of the coronavirus a chance to spread.

The RKI recorded an incidence of zero – no new corona infections were registered there within seven days – for Schwerin and the Tirschenreuth district in Bavaria. In this county, the incidence at the end of January was well over 300. (10.06.2021)

The digital vaccination certificate should be available in Germany by the end of the month – this has been announced by Federal Health Minister Jens Spahn (CDU). The new Covpass app will now be made available in the coming days, as will the corresponding update of the federal corona warning app, said Spahn. Doctors and vaccination centers should then also be able to issue the new certificates.

However, Spahn warned against the expectation that the subsequent issuance of certificates for those who have already been vaccinated will take place quickly. “It starts now, step by step,” said Spahn. Those who have been vaccinated should either be sent the proof that can be transferred to their mobile phones from the vaccination centers or be able to collect them from a pharmacy from Monday onwards – upon presentation of the paper vaccination pass. The pharmacists’ association had already announced that it would take a while before many pharmacies would offer this. (10.06.2021)

Stiko boss: Even vaccinated people are not always protected

The Standing Vaccination Commission (Stiko) assumes that many people have not built up effective corona immune protection despite having been vaccinated completely. The Stiko chairman Thomas Mertens told the newspapers of the Funke media group: “There are now several studies that show that the vaccination against Covid-19 does not work as well in people whose immune system is slowed down by drugs as it does in others.” The immune response is worse or fails completely.

People who have had an organ transplant or, in some cases, cancer patients are also affected. In such cases it is important to reduce the risk of infection in the environment through vaccinations as much as possible. “This is called the cocoon strategy,” says Mertens. In rheumatism patients too, the immune response is at least reduced, depending on the type of immunosuppression. At the moment it is not yet possible to estimate how large the group of patients is who, despite having been completely vaccinated, had no or insufficient immune protection. “But we have to assume that these are not just isolated cases.” (10.06.2021)

According to a newspaper report, Thuringia’s Prime Minister Bodo Ramelow (left) speaks out in favor of completely relaxing the corona rules in autumn. Ramelow said that Rheinische Post. The resistance is higher this year because of the vaccine. But he also knows that 20 to 25 percent of the population will not be vaccinated. “They then have to bear the risk themselves and take responsibility,” said Ramelow.

According to the head of government, two people probably died as a result of a Covid vaccination in Thuringia. He regrets that very much, the relatives received support, said Ramelow. “But with two in a million, the risks are assessable and explainable,” he adds. “Normality means living with risks.”

Union parliamentary group leader Ralph Brinkhaus expressed himself similarly. He wants to lift state regulations from the Corona crisis after the federal election that will take place at the end of September. It is dangerous to get used to state interventions in many situations, the CDU politician says in a preliminary report in the newspaper world according to. (10.06.2021)

Mecklenburg-Western Pomerania’s Prime Minister Manuela Schwesig (SPD) calls for uniform nationwide rules for corona risk areas. It could always happen that the number of infections increases again in individual regions, and action must then be taken, Schwesig said Rheinische Post before the federal-state deliberations this Thursday.

Schwesig also spoke out in favor of uniform rules at major events and folk festivals. The chairman of the Prime Minister’s Conference (MPK), Berlin’s Governing Mayor Michael Müller (SPD), had told the German Press Agency about the upcoming talks: “In addition to the general topics of the regular MPK, it will also be in the interests of all Prime Ministers for possible approvals of Go to major events with an audience. ” He also assumes that the upcoming vaccine deliveries and vaccination offers, especially for children and adolescents, will be discussed.

Green parliamentary group leader Katrin Göring-Eckardt told the newspapers of the Funke media group that the federal government and the states had to prepare for autumn. “If the corona numbers rise again after the summer, we must not be unprepared again.” We must now work at full speed to ensure that schoolchildren can experience a normal school year from autumn onwards. (10.06.2021)

In the current hour in the Bundestag, allegations against Health Minister Jens Spahn (CDU) in connection with supposedly inferior corona masks were discussed. Politicians from several parties accused the Minister of Health of failing on several points in combating the Corona crisis. The focus was on his ministry’s procurement of supposedly inferior masks. The election campaign continued to pick up speed with the debate. Few of those involved revealed new facts.

Jan Korte from the Left Party initially quoted from a Dekra report. This had checked masks from 27 manufacturers on behalf of the ministry. The result: 13 of the tested products did not comply with the European standard (EN), i.e. almost half.

Katja Mast from the SPD said that the only thing in the pandemic was to protect all people in Germany equally. “Attack is not always the best defense,” said Mast to Jens Spahn.

Wieland Schinnenburg from the FDP said Spahn had to apologize for his many mistakes in the pandemic and had “invented” a test standard CPI that was completely inadequate. The standard for “corona pandemic infection protection masks” (CPI), which was co-developed by the Ministry of Health, is identical to the standard for “corona pandemic protective masks” (CPA) demanded by the labor department, explained Spahn’s department. With the CPI standard, only a test of the masks at 70 degrees and the “extended application test” were dispensed with. Before a possible distribution of these CPI masks, the Ministry of Labor insisted on the CPA standard, which is why most of the CPI masks should now end up in the “National Health Protection Reserve” – ​​for future emergency situations.

In view of the approaching federal election, Spahn received support from within its own ranks. So stressed Michael Grosse-Brömer (CDU)that the federal government has managed the country well through the pandemic so far, also thanks to the work of Spahn. He said the mask scandal was “all hot air”. He called on the SPD to apologize for the allegations of having distributed inferior masks. (09.06.2021)