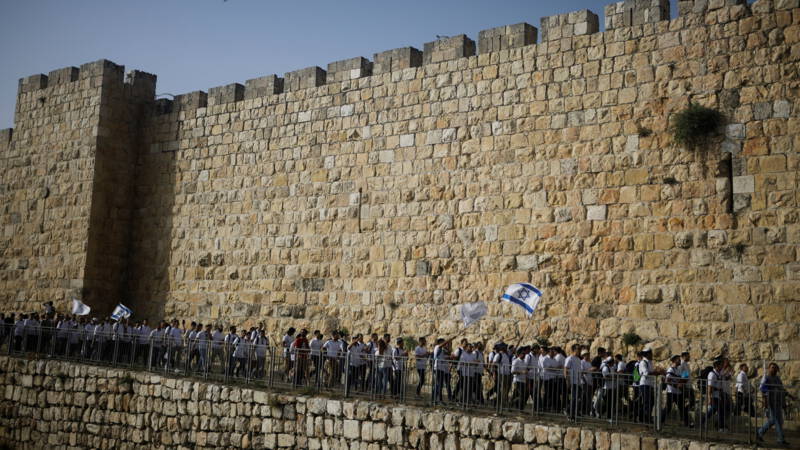 A march with Israeli flags through the Old City of Jerusalem is canceled on Thursday. The police have not approved the route. Ultra-nationalist protesters wanted to walk through the Damascus Gate and pass Sheikh Jarrah, the neighborhood in East Jerusalem where four Palestinian families are at risk of eviction. Hamas had threatened renewed violence if the march were to take place.

The march was originally scheduled for May 10, the day Israel celebrates the 1967 capture of East Jerusalem. Palestinians saw this as a provocation, especially in view of the impending evictions. Due to tensions, the route was changed at the last minute and the march was cut short. Hamas nevertheless fired rockets at Jerusalem that day. This was followed by 11 days of airstrikes on Gaza by the Israeli army and further rocket fire by Hamas.

The protesters now wanted the march to take place again via the original route. The organizers and far-right politicians are now accusing the police of “capitulating to terrorism”, says Itamar Ben-Gvir of the far-right party Otzma Yehudit. Hamas sees the decision as proof that Israel now “sees the dangers of crossing this red line,” a spokesman told Reuters news agency. Israeli Defense Minister Benny Gantz had already asked police not to allow the march, so as not to reignite tensions between Jewish Israelis and Palestinians.

At the same time, the eviction of the four Palestinian families from Sheikh Jarrah may have come a step closer. That case was one of the triggers for the tension between Israel and the Palestinians, which subsequently led to the armed conflict in the Gaza Strip.

READ  Ecuador: a giant tortoise belonging to a declared extinct species discovered in the Galapagos

Israel’s Supreme Court is considering whether Palestinian families can appeal their eviction. That case was postponed last month after Israeli chief prosecutor Avichai Mandeblit said he might want to interfere in the case. The hope was that this would relieve the pressure. Now Mandelblit says he will not interfere in the case. This clears the way for a court hearing.

Watch this video from our correspondent Ties Brock on the background of the dispute: