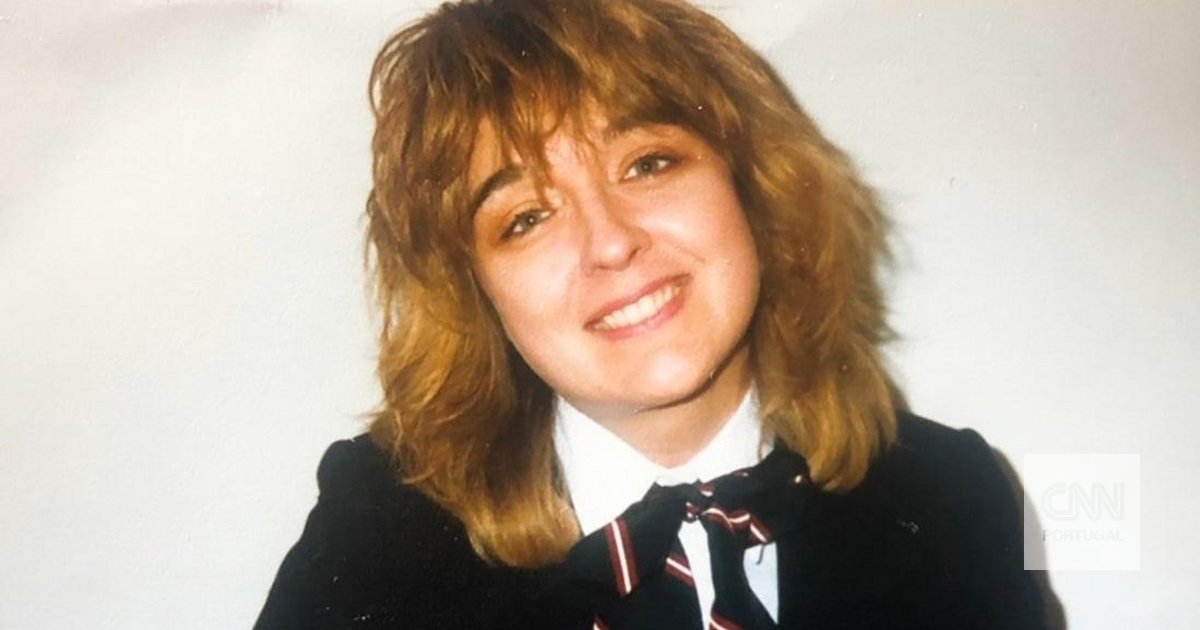 Confessions of an ’80s Flight Attendant

A job that started out as sexist, with weight limits that could lead to dismissal, sex on board between passengers, unbearable tobacco smoke, unusual events, and that later changed forever with the democratization of flights.

“I came of age when the age of the jet plane came of age,” says Ann Hood, an American novelist and author. best-seller from the New York Times, whose latest book “Fly Girl” is a memoir of her adventurous years as a flight attendant for TWA, right at the end of the Golden Age of air travel.

As a child growing up in Virginia, he watched the first flight of the Boeing 707 — which ushered in the era of airliner travel — and watched the construction of Dulles Airport.

At age 11, after returning to Rhode Island with his family, he read a 1964 book entitled “How to become an airline stewardess” [tradução livre: “Como transformar-se numa hospedeira de bordo”] and decided.

“Although the book was sexist as hell, it appealed to me because it talked about having a job that allowed you to see the world, and I thought, well, it might work.”

When he graduated from college in 1978, Hood began submitting job applications to airlines. “I think 1978 was a really interesting year, because a lot of the women I hung out with in college had one foot in old ideas and stereotypes, and some had one foot in the future. It was a bit of a confusing time for young women.”

“Flight attendant” was a newly coined term, a gender-neutral improvement over “hostesses,” and airline industry deregulation was just around the corner, ready to shake things up.

But for the most part, flying was still glamorous and sophisticated, and flight attendants were still “beautiful and sexy ornaments,” as Hood puts it, even though they were already fighting for women’s rights and against discrimination.

The stereotype of the miniskirt hostesses flirting with male passengers still persisted, popularized by books like “Coffee, Tea or Me? The Uninhibited Memoirs of Two Airline Atewardess” [tradução livre: “Café, chá, ou eu? As Memórias Desinibidas de Duas Transportadoras Aéreas”] — published in 1967 as factual, but later revealed to have been written by Donald Bain, a public relations manager for American Airlines.

Some of the worst requirements for being hired as a flight attendant – such as age restrictions and loss of job in the event of marriage or childbirth – had already been lifted, but others remained. Most shocking, perhaps, was the fact that women had to maintain the weight they had at the time of hiring.

“All the airlines submitted a chart with your application, looked at your height and maximum weight, and if you didn’t fit that, they wouldn’t even interview you,” says Hood. “But once signed, at least in TWA, I couldn’t reach that maximum weight. You had to stick to your contracted weight, which in my case was about seven kilos less than my maximum limit.”

“My roommate got fired over this. What’s really terrible, apart from what it did to women, is that this restriction wasn’t removed until the 90s.”

Hood was one of 560 flight attendants out of 14,000 applicants hired in 1978 by TWA, then a major carrier, which would be acquired by American Airlines in 2001.

The work began with a few days of intensive training in Kansas City, where the cadet flight attendants would learn everything from aircraft part names to emergency medical procedures, as well as the safety protocols of seven different aircraft. The list included the “Queen of Heaven”, the Boeing 747.

“It was terrifying, because it was so big – and the stairs, the spiral stairs leading to first class that you had to go up and down not infrequently,” says Hood. “I would keep thinking, ‘Don’t stumble’. I just got used to it.”

Hood’s favorite plane to work with was the Lockheed L-1011 TriStar. “On domestic flights [nos EUA], only Eastern Airlines and TWA flew with it. It was a very affordable and functional plane, with a nice layout of two seats on each side and then four seats in the middle, so everyone could get out easily. Nobody was unhappy on that plane.”

Flying back then was still glamorous, he says.

“People dressed to fly and remembered food in a positive light. It’s really different from today. I can only compare it to being in a nice hotel, or maybe on a cruise ship. Nothing was plastic and the hallway was super pleasant,” says Hood, who remembers donning his Ralph Lauren uniform and chopping up cooked-to-order chateaubriand steaks for the first-class passengers, who also had a choice of Russian caviar and lobster to accompany their Dom Perignon. 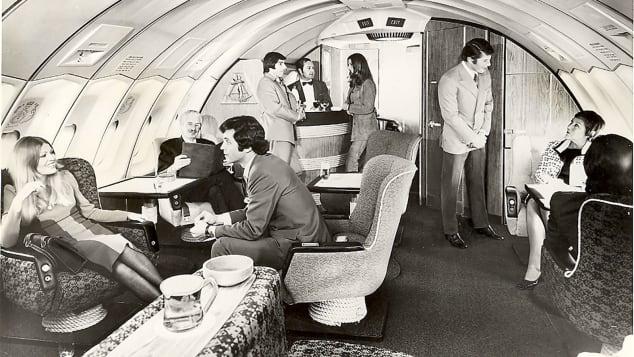 It wasn’t all roses. Smoking was widespread on board, which for flight attendants was a nightmare.

“If I were going on a five-day trip, which wasn’t uncommon, I would have to pack a whole separate uniform, just because it would smell too much of smoke,” says Hood. “I was glad when that was over. The front rows of each section were considered non-smoking, but the entire plane was full of smoke because you couldn’t stop him from going backwards, it was ridiculous.”

And how much to or “Mile High Club”? [“Mile High Club”, ou “Clube das Altas Milhas”, era a gíria para encontros sexuais a bordo de um avião.] “It wasn’t uncommon on international flights to see a man walk into the bathroom and a minute later his seatmate join him, or another version of it,” says Hood. “It didn’t happen on every flight, but you could see it.” 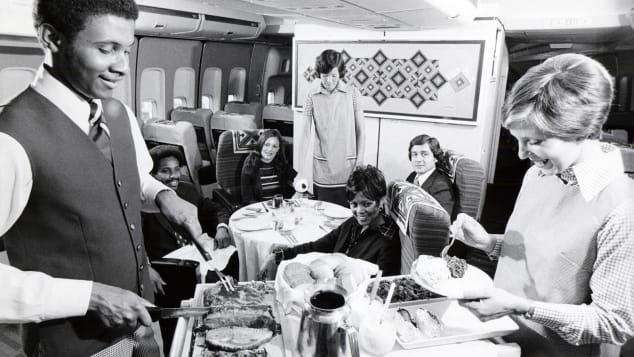 “International flights usually weren’t as crowded as they are now, so in those mid-sections of five seats on a 747 you could see a couple put their armrests up, grab a blanket and disappear under it. were doing, but it looked suspicious”.

As for passengers flirting or asking flight attendants to go out with them, that was also common. “I went out with passengers, but in most cases it was disastrous. It was never what I had imagined. But in 1982, I met a guy on a flight from San Francisco to New York. He was sitting in 47F – and I dated him for five years”.

Hood has seen his fair share of bizarre things on board. “The weirdest would definitely be the first class woman who looked like she was nursing her cat. I mean, I can’t say it was actually happening, but she had the cat on her chest.”

“And then the guy who flew all the way dressed in his underwear and a shirt and tie because he didn’t want to wrinkle his pants for a job interview. Or the guy in a 747 in Frankfurt who rode his bike down the aisle,” he reveals.

That said, routine sometimes took over, and not all flights were a wonderful concentrate of adventure and glamour.

“I’d say work was 80% fun and 20% boring. On some flights, especially those that weren’t very crowded, there was a lot of time to fill. You can only serve so much food and so much drink and watch so many movies. I loved talking to people. I loved the feeling. I still love flying today,” says Hood.

Hood says it was indeed possible to visit and experience the cities he traveled to. “Sometimes the layover was too short or I was tired, but most of the time, the city was right outside the door. I took great advantage of that on international flights.”

Hood left work to focus on her writing career in 1986, and by then things had changed. Deregulation, which stripped federal control over everything from fares to routes, had fully gone into effect, changing flights forever.

Airplanes were filled with more seats and the corridor was no longer so pleasant, but flying was also democratized and made available to a much larger part of society.

Hood says she is proud of her career in the skies.

“The flight attendants are a force. They are highly unionized. They are independent. In the cabin, they make all the decisions. They have to solve problems. They are there for emergency matters. find their way.”

“It’s such an empowering job and yet it’s a sexist job. In itself, it’s as contradictory today as it was when I started it,” he says.

Still, Hood recommends him as a career option.

“I was 21 when I was hired, and it gave me confidence, it gave me balance, and the ability to think for myself,” he adds. “To take the helm of that plane and, after leaving, enter a city and feel completely at home – or at least figure out how to feel at home in it.”

“I don’t know if it should be someone’s life’s work – if you want it to be that way, great. But I think a few years working as a flight attendant can change your life.”