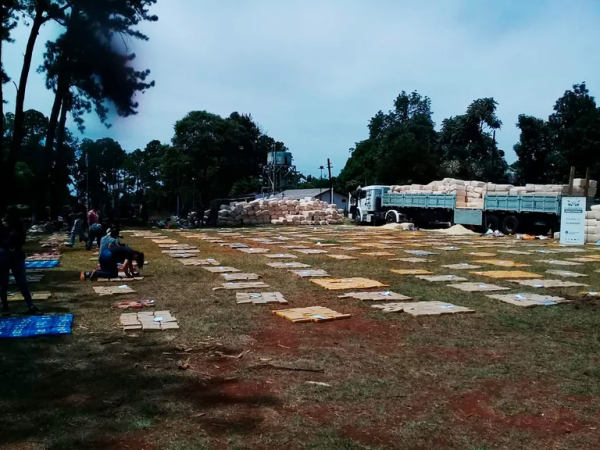 Concern at the Misiones border over the detention of foreign criminals

A federal court seized nearly 50,000 kilos of marijuana in the first three months of the year. To be exact, there were 47,929 kilos of marijuana confiscated by order of Miguel Angel Guerrero, federal judge of Eldorado, Misiones. The almost 50 tons of drugs had entered the country through the porous border with Brazil and Paraguay.

The jurisdiction of the federal court of Eldorado covers six of the 17 departments of a province with an area of ​​29,801 km2. The territory of the court extends through the missionary departments of Eldorado, Montecarlo, Iguazú, General Manuel Belgrano and San Pedro, some 12,500 km2. The limits with Paraguay and Brazil are basically river borders, except for two dry border areas. Everything passes easily from one side to the other of the vast border. Misiones is mainly a place of transit by route to the ports from where the drug is exported to Europe or to the cities where it is consumed.

The security forces that are in the difficult terrain of the Misiones border zone are the Misiones Police, the National Gendarmerie (custodian of the dry border), the Argentine Naval Prefecture (on the river border) and, to a lesser extent, the Federal Police. The researchers emphasize that the border is per se permeable and that the permeability increases when the troops of the Gendarmerie and Prefecture settled in the place are destined to combat insecurity in distant places such as Rosario or Greater Buenos Aires.

On May 12 last at the Meeting of Federal Judges held in Rosario, Guerrero was one of the exhibitors who most attracted the attention of the audience. Because he painted a picture that set off several alarms. In addition to revealing the enormous quantity of drugs seized – he added 187 kg of cocaine and 18,500 methamphetamine pills to marijuana – he assured that the presence of “transnational organized crime” had been detected in the area..

It is that in the first 90 days of the year Paraguayan and Brazilian criminals were arrested whose extraditions are processed in the federal court of Eldorado. None of them were arrested for drug trafficking. They all fell because they were found in vehicle controls with false personal documents, with adulterated vehicle IDs or with weapons that they were not authorized to carry.. When the extradition requests arrived, several of them had a record of murder, kidnapping, extortion or prison escapes. The presence of wanted criminals on the other side of the border was one of the signs that led to the suspicion that the Misiones border area is a refuge for criminals who continue to operate regardless of what the borders between the countries indicate.

In addition to the nine arrests at the beginning of 2022, there are other signs that have been on for years when an incipient presence of international criminal groups was detected. In several drug seizures, shipments identified with the stamps of criminal gangs known for their organization and their high level of operation in Brazil and Paraguay had been detected. In these procedures, the truck drivers or the owners of the place where the drug was found were arrested. It has not reached higher in the organizations.

As judicial sources explained to Infobae, the discovery of shipments of marijuana with the seal of a gorilla indicates the presence of Paraguayan drug traffickers who supply the second largest criminal organization in the state of Rio Grande do Sul: bullet in the face. This is a gang that controls drug trafficking in Porto Alegre and has had a presence in Paraguay for years. The arrival of the shipments in Misiones led the researchers to handle the hypothesis of their arrival in Argentina, at least in the logistic aspect. Bala en la cara is the second criminal gang in Rio Grande do Sul: it has a dispute against the organization called Las Manos for control of the territory and it was detected that it also operates in Uruguay.

There were also procedures in which drug packages were confiscated whose seal referred to the First Capital Command (PCC), one of the largest criminal organizations in Brazil. The PCC has its origin in the prisons of São Paulo. It began in the early 1990s as a group that was formed to demand better prison conditions and became a kind of criminal syndicate – not only dedicated to drug trafficking – spread throughout the Brazilian territory. Several members of the PCC were and are detained in Paraguayan prisons and it is estimated that they have crossed the border and are also operating in Bolivia and Argentina. The Rojo Command (CV-Red Command), a criminal organization that emerged in the prisons of Rio de Janeiro, manages the marijuana corridor that from Paraguay – the world’s leading producer of cannabis – reaches the beaches of Rio de Janeiro. The CV and the PCC were allies until 2016 and since then they have been fighting for control of routes for their businesses. CV activity was also detected in the Triple Frontier area shared by Brazil, Paraguay and Argentina.

Another of the seals found on the drug seized in the proceedings bears the name of the First Border Command (PCF). That organization was led by Néstor Rojas, a missionary who is under arrest and in an oral and public trial because 11 tons of marijuana and 32 kilos of cocaine were seized from him. Rojas presented himself as the owner of a “franchise” of the PCC, something that was initially dismissed by the investigators. With the passage of time and more information added to the file, the hypothesis that indicates the relationship with the Brazilian gang was enlarged. Rojas, from jail, planned the assassination-not carried out-of a missionary judge who was investigating him for two murders.

According to drug trafficking investigators, one of the main differences between local gangs – family clans dedicated to drug dealing – and those that come from neighboring countries is the logistical capacity granted by money. They have more sophisticated distribution systems -several vehicles moving at the same time- rapidly coordinated through communication structures against which it is very difficult to compete. Before, the defense attorneys for the local drug traffickers were from the area and the legal fight was simpler.

Now criminal lawyers arrive from other places (Buenos Aires, Córdoba, etc.) to defend detainees with contacts abroad and the files are complicated. The hiring of lawyers from other districts is another example of the economic resources that drug trafficking manages in the region and therein lies another of the inequalities when it comes to investigating international organizations. Some of the gangs combine drug trafficking with smuggling. In recent months there have been operations -on both sides of the border- in which smuggling maneuvers of Argentine wines -very much in demand in Brazil- and also of tires were discovered. The original smuggling routes, as in the whole world, are reused for drug trafficking.

There are also differences in judicial infrastructure. On the Brazilian side of the border with Misiones there are nine courts dedicated to investigating cases such as drug trafficking. On the Argentine side there is only one. And that it also has jurisdiction in other jurisdictions – tax executions, civil – in addition to criminal. 29 people work in the Eldorado federal court. This court is divided into six locations, all nearby, a fact that makes daily work difficult. There is no wifi: in the era of the digital file, the Eldorado courthouse does not have a wireless network to access the internet.

In addition, there are recurrent power cuts in the area, which means that, for example, flagrante delicto hearings that are taken through a platform to make video calls are not recorded due to the lack of light. And get lost.

At the end of 2011 a federal court was created in Iguazú but almost eleven years later it was not enabled. When it is enabled, there will be two federal courts that will be in a position to deal with cases in which it is a question of disrupting drug trafficking organizations that have begun to operate in some areas bordering Misiones.

Meanwhile, those 13 people who work in the criminal area of ​​the Eldorado courthouse -without Wi-Fi and with intermittent electricity- will be the ones who bear the responsibility of investigating drug trafficking in a territory with permeable borders and that is about 60 times larger than the City. from Buenos Aires.