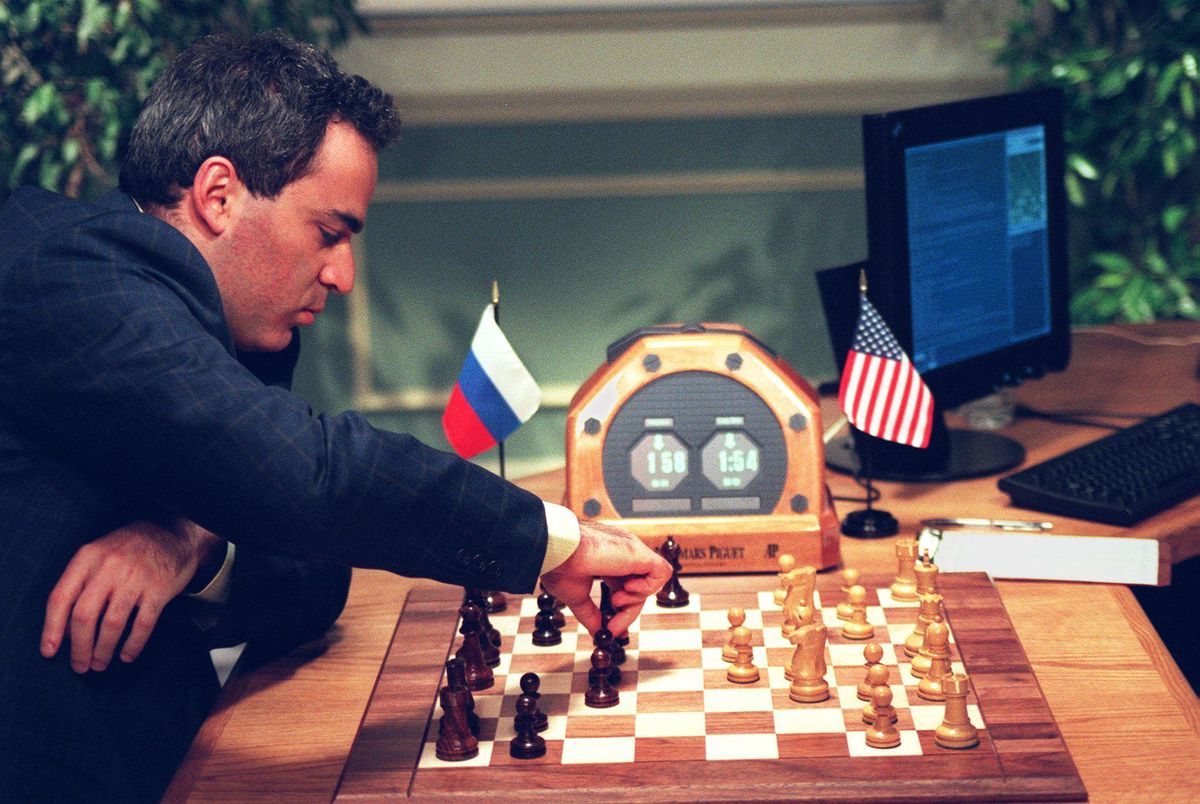 Computers: 25 years ago, a computer tamed the king of chess

Computer Deep Blue’s victory over chess champion Garry Kasparov dates back to May 1997.

Right hand under his chin, dark eyes, Garry Kasparov stares at the chessboard one last time, annoyed, before abruptly leaving the table. It’s a thunderclap: the chess king has just been beaten by a computer. On May 11, 1997, a machine knocked down a reigning world champion for the first time after a regulation match. This date will mark the history of the discipline and shine the spotlight on the dizzying potential of artificial intelligence. The “Ogre of Baku”, 34 years old and then master of the world chessboard since 1985, lost after six games, with the final score of 3.5 points to 2.5, against the Deep Blue supercomputer designed by IBM.

In front of cameras from all over the world, who came to film the show in New York, this setback has a taste of humiliation for the tempestuous Kasparov. Hadn’t he assured that he would stand up to the machines at least until the dawn of the next millennium? A year earlier, the Russian had knocked down Deep Blue with the score of 4 to 2. But its designers have constantly improved the 1.4 ton monster, now capable of calculating 200 million positions per second.

Shaken by his defeat, the champion nevertheless refuses to accept the superiority of the machine. “The computer hasn’t proven anything yet,” he said at the post-match press conference. “A man, the best player in the world, cracked under the pressure”, he explains, speaking about himself, “but you can beat the computer, he has too many weak points”. Far from being consoled by the 400,000 dollars promised to the loser, he castigates IBM, which did not give him access to previous games played by the machine, which was able to analyze all of its own.

He even accuses himself, suggesting that humans assisted the computer during the match and regretting not having “imposed certain conditions” for the game to be “honest”. The other players of the world’s cream of chess, who scrutinized the confrontation live, also refuse to consider the defeat of the grandmaster as a tipping point. Asked by the press, they point to a series of bad choices by the Russian champion. For some, his obsessive need to understand the blows of the machine, rather than focus on winning, was fatal to him.

Years later, a book will relay a secret from a developer of Deep Blue: a malfunction of the computer would have tipped the game. Unable to choose between several moves, the machine would have played randomly during a game, destabilizing Kasparov for the rest of the confrontation.

“With a little hindsight…”

Either way, Deep Blue’s victory made IBM happy, delighted to see the interest aroused by its computer’s prowess. “All of this has nothing to do with a fight of man against machine but with how we humans can use technology to solve complex problems”, enthused after the match the head of the project. IBM, Chung-Jen Tan. And to praise what artificial intelligence would bring in many fields, from financial analysis to the study of natural, meteorological or seismic phenomena.

Kasparov, revengeful, will draw twice in 2003 against computers. But time will eventually soothe his wounded ego. After the 1997 defeat, “I was devastated”, he confided in an interview with the Swiss newspaper Le Temps in 2019. “But with a little hindsight”, his defeat appeared to him as “a victory for the human race”, since it foreshadowed “the breadth of the range of activities that could be assisted by technology”.

Now, what worries the chess legend are the excesses of the digital giants on individual freedoms: “We need them to be accountable”, he urged in an interview granted in November 2021 to AFP.

Since the victory of the Deep Blue computer against chess champion Garry Kasparov in 1997, the machine has continued to demonstrate its ability to surpass human beings in increasingly complex tasks… without still second to none in terms of adaptability and versatility. Deep Blue’s victory was a “culturally incredible” event, but “technologically, it was only a great success”, explains to AFP Philippe Rolet, doctor in artificial intelligence. Basically, the success of Deep Blue is only a victory of “brute force”. At this moment, the machine wins thanks to its tremendous computing power, which allows it to determine all the possibilities of evolution of the game very far in the game, and to deduce the best piece to play. In reality, the real revolution is at this time barely emerging from the laboratories: it is that of machine (or automatic) learning, and artificial neural networks, which have made immense progress in the artificial intelligence over the past decade.