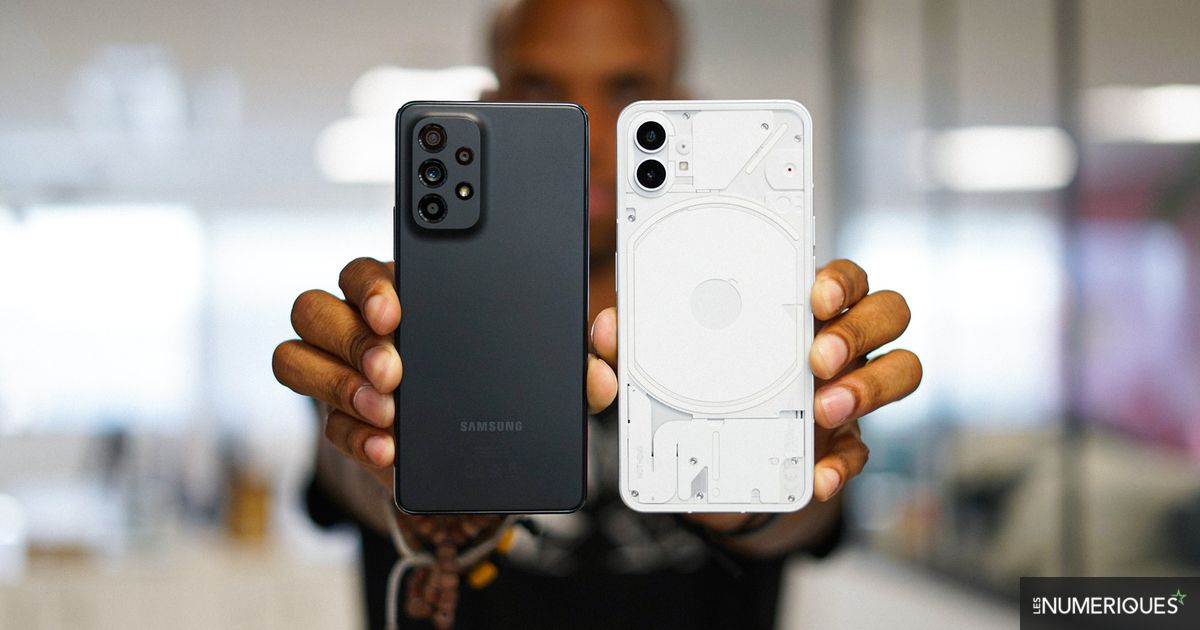 Comparatif Duel : Samsung Galaxy A53 5G vs Nothing Phone (1)

Both devices have good photo sensors and engage in an interesting duel. This is good news, because it hasn’t always been the case on the mid-range.

While Samsung opts for a quadruple module, Nothing plays simplicity by being satisfied with two. The South Korean opts for a 64 Mpx wide-angle whose lens opens at f / 1.8 coupled with an ultra wide-angle of 12 Mpx (f / 2.2). The set is completed by two macro and depth sensors of 5 Mpx each (f / 2.4). The Nothing Phone (1) has two sensors (wide-angle and ultra-wide-angle) of 50 Mpx.

Here again, the outsider stands out. On the wide-angle, and although the image of the Galaxy A53 is sharp and detailed, that of the Nothing Phone (1) is of better quality. It benefits in particular from a more accurate colorimetry while that of Samsung seems saturated. At night, the two smartphones defend themselves well. The Galaxy A53 5G retains a good level of detail, but shows digital noise. Nothing opts for a fairly gentle digital smoothing, which delivers a slightly less precise, but more homogeneous result.

Still rare enough to be underlined, the two smartphones offer good results on the ultra wide-angle. This is at least the case when the light is present in abundance, which allows you to take advantage of clear and rather detailed shots. Despite its lower definition, the Samsung sensor has nothing to be ashamed of and even displays better sharpness than its competitor.

It inevitably goes bad at night, where neither of the two mobiles delivers really satisfactory results. The snapshot of the Samsung is however better exposed.

See also  The incredible trick that allows you to use WhatsApp with a landline phone: how to activate it?

Nothing therefore takes the advantage thanks to the performance of its main sensor, which was already neck and neck with the Pixel 6a during a previous duel.