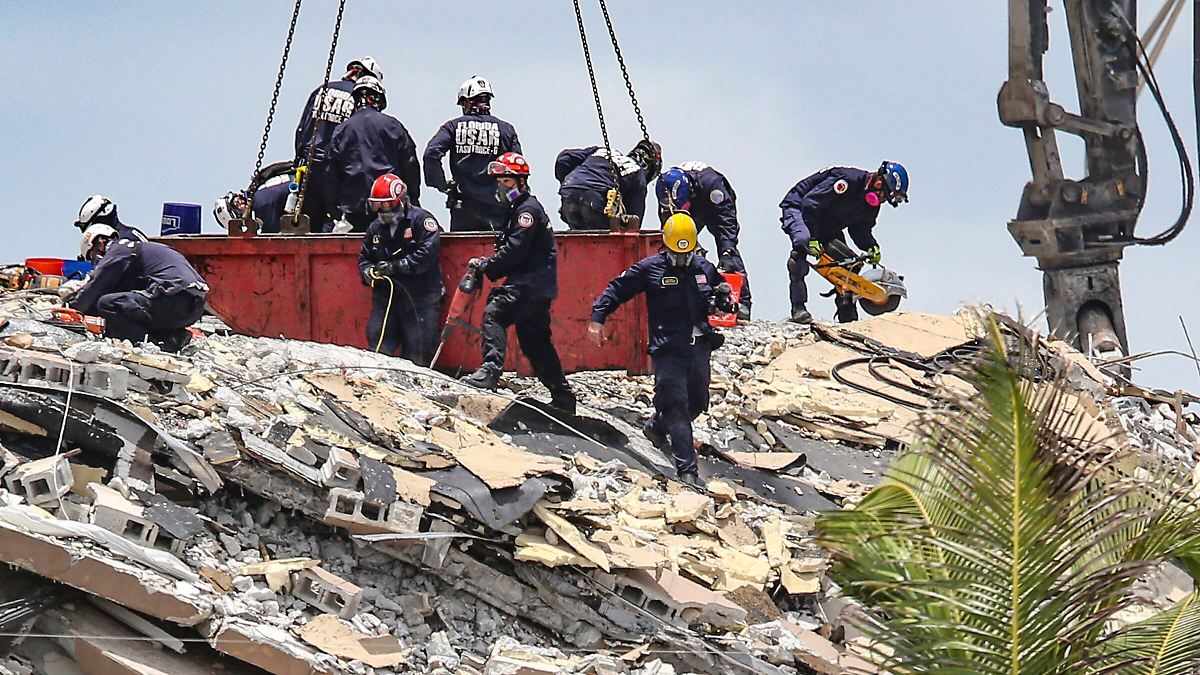 Collapse in Florida: Work on the ruin is only going slowly

Work on the ruin is difficult

The salvage work on the ruined residential building in Florida is only progressing slowly. Sniffer dogs, cameras, listening instruments and heavy equipment are in use. 150 people are still missing there, the number of dead found rises to eleven.

After the partial collapse of a twelve-story apartment building in the US state of Florida, the death toll continues to rise. During the day, another lifeless body was found in the rubble, said the mayor of Miami-Dade district, Daniella Levine Cava at the accident site in Surfside near Miami. The number of deaths had risen to eleven. Levine Cava predicted that the numbers are in flux and will continue to change. According to her, 150 people are still missing. She stressed that the search for victims in the rubble was going on.

The building near the beach with around 130 residential units had partially collapsed on Thursday night. The misfortune surprised people in their sleep. A desperate search for survivors has been going on ever since. It’s a race against time. Rescue teams are on duty around the clock – with sniffer dogs, special cameras, listening instruments and heavy equipment.

Not all of the missing must have been in the building. According to the authorities, it is a list of people who could potentially have been in the house at the time of the accident. Many families fear for their loved ones. The police have so far published the names of eight identified dead: The victims are between the ages of 26 and 83. There is also an elderly couple among them.

Fire on ruin under control

According to Mayor Levine Cava, the search forces have also found other unidentified “human remains” in the rubble. It was not more specific. Identification is not easy, she stressed. DNA tests would be used here. DNA samples were collected from relatives for this purpose.

Miami-Dade District Fire Department chief Alan Cominsky said the search for possible survivors continues. The situation is “very demanding and difficult”. But he emphasized: “We’ll continue.” In the meantime, a fire in the rubble had significantly hampered the search. However, the emergency services had brought the fire under control over the weekend.

The cause of the partial collapse remains a mystery. The residential complex known as Champlain Towers South dates from the 1980s. At the weekend, an inspection report from 2018, written by an external company, became public, in which experts listed several defects – including major structural defects in the building’s concrete. It remained open whether these could have any connection with the collapse. Levine Cava promised again that the cause of the accident would be investigated. The focus is currently on the search.

See also  In Baltimore, we pilot a space telescope