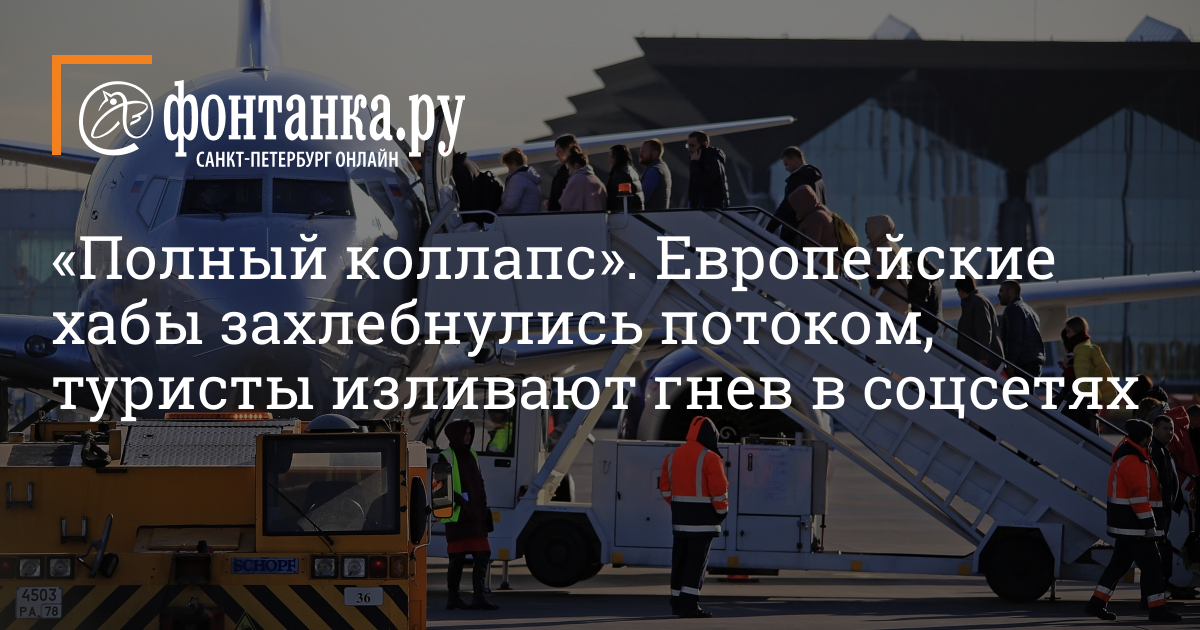 Crashes and long queues across Europe are due to staff shortages and seasonal rush. The situation was brought to a collapse by a mass strike of employees of the German carrier Lufthansa. Other airport authorities blame computer glitches and the weather, with passengers pretending to be disabled to skip the line. Less fortunate travelers share photos and videos of the collapse at the biggest hubs online.

In Germany, more than a thousand Lufthansa flights were canceled due to a July 27 strike by the airline’s ground staff. Airports in Frankfurt and Munich were hit the hardest. About 134,000 passengers have been forced to change their travel plans or cancel them altogether, according to the DPA agency.

The airline has advised affected passengers not to travel to airports as most of the counters there will not be staffed anyway. But this did not help: crowds of those who could not fly away accumulated in air harbors.

The next day, airports also faced congestion. “You have to stand in lines for 3-4 hours just to rebook your flight. There is complete chaos here, ”one of the passengers of Frankfurt Airport reports on social networks. “Frankfurt airport was crazy, the lines were so long and they had one person checking passports, it was so annoying,” writes another traveller.

The strike at the airport apparently increased the load on the railroads. “Lufthansa and Deutsche Bahn suck today… Canceled and rescheduled flights, delayed luggage and completely unreliable train schedules. Journey from hell… And it’s not over yet,” another tourist comments.

However, the airports were working at their limit even before the strike. “I’m from Deuce[сельдорфа] flew out, without luggage, immediately to the security, arrived in 2.5 hours – as a result, right up to the landing came. The whole airport is one giant queue,” says a Russian traveler about her trip a week ago. “Koln. The airport. Collapse. They didn’t fly away,” writes a resident of Riga, who was unable to return home the first time last week.

Can not cope with the passenger flow and the Amsterdam Schiphol, which also tried to limit the number of passengers. “What a day… Just missed our flight to Lisbon!!! Stuck in a brutal five-hour security line,” writes a tourist from Portugal.

The railroads aren’t doing well either. The traveler, who planned to get from Amsterdam to London by Eurostar train, told how, after the passport control of all passengers, about 1,000 people were turned around and asked to transfer to an alternative train to Rotterdam. “They asked us to leave. A thousand people came out. We were asked to switch to another path and stand again in line for passport control. We got up. The line didn’t move for an hour and a half. The border guard did not come to passport control,” she says. As a result, the train was sent to Brussels, where the situation repeated itself again. “A giant queue, a crush, a nightmare,” the traveler describes. As a result, instead of four hours, the trip stretched for a whole day. “Total, complete collapse,” she sums up.

It will not be possible to quickly fly away from Italy. “An example of the Italian “quantum queue” at Milan airport,” one of the passengers posted on the social network. “Several queues merge into one line near the gate,” she comments.

However, the problems were still in the past month. “We flew to Italy via Istanbul in June. Four out of five flights were delayed. All without explanation, but the delays were from an hour to three. In Istanbul, at the counter, where new tickets are issued to those who, through the fault of the airline, did not get on a connecting flight, there were huge queues that stood there for about an hour. Upon arrival in Bari from Istanbul, we stood at passport control for an hour, although our flight was the only one. Only two booths worked, ”said Alex, a Fontanka reader.

The collapse in recent days has happened in the British Heathrow. Earlier, the air harbor asked airlines to limit ticket sales for this summer in order to keep the number of passengers at an adequate level. But apparently they didn’t listen.

“The airport is a huge mess. Some passengers have to wait for luggage for eight hours, ”writes one of the travelers, advising other tourists to fly light to avoid queues. The British media are also publishing footage of mountains of suitcases piled up due to the confusion.

Additional problems at the airport are created by passengers who, after listening to recommendations on TikTok, pretend to be disabled and request an escort to skip the line. The number of requests in recent weeks has increased by , said the head of Heathrow, John Holland-Kay. Earlier, a British tourist posted a video on the social network, feigning a sprained ankle and checking in for a flight out of turn.

See also  "I've never seen a president as bad as you": Macron taken to task by a citizen (VIDEO)

In the arrival hall of the largest airport in Romania, Otopeni, tons of unclaimed luggage also accumulated on the eve, Regnum reports, citing the Bucharest Digi24 TV channel. The reason for this situation was a failure in the computer system of the terminals, due to which the dispatch and delivery of the relevant goods were blocked for several hours. According to other information, the incident occurred due to the negligence of the technical staff of the structure.

Earlier it was reported that the main European hubs are booming after two years of restrictions related to COVID-19. So, in the first half of this year, the total passenger traffic in them increased by compared to the same period last year, or 660 million people. While passengers have overwhelmed airports, they are running out of workers following layoffs during the pandemic. Chaos at airports and flight cancellations could last until the end of 2023, says John Holland-Kay.