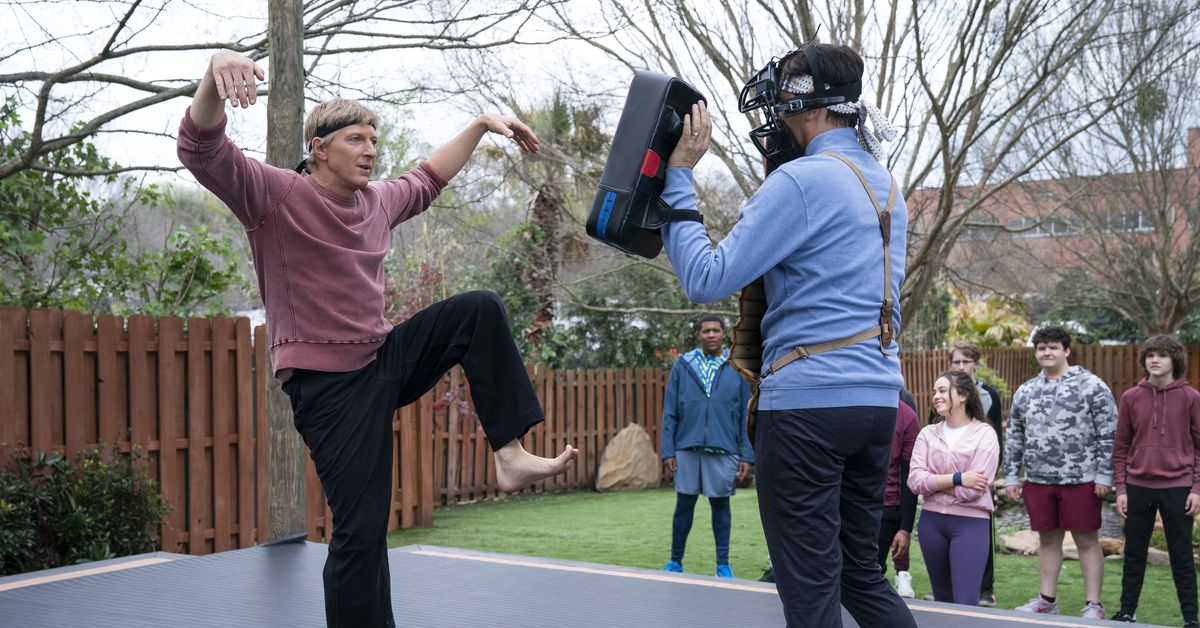 More than 35 years after Daniel LaRusso defeated the heavily favored Johnny Lawrence in the finals of the All-Valley Under-18 Karate Championships, these two middle-aged overgrown adolescents are still clinging to that moment and its repercussions, still revisiting old grudges, still vowing to move on — but never actually moving on. Geez, even Bill Buckner and Mookie Wilson have come to terms with their respective roles in the 1986 World Series, and that was the WORLD SERIES.


Perhaps a bigger upset than Daniel’s victory over Johnny in 1984 is the fact “Cobra Kai” showrunners Josh Heald, Jon Hurwitz and Hayden Schlossberg have been able to deliver four quality seasons of this unabashedly corny, sometimes wildly implausible and yet utterly binge-worthy series. They’ve done a fantastic job of dusting off the (admittedly beloved) source material while reuniting Ralph Macchio as Daniel, William Zabka as Johnny and Martin Kove as Kreese, adding a new generation of punching/kicking/feuding teenagers and bringing back a host of memorable villains and love interests from the “Karate Kid” movies. I didn’t even know I cared about the fates of some of these supporting characters until they resurfaced decades later, popping back into Daniel LaRusso’s life just in time to launch a new plot line.

Season 4 picks up in the aftermath of the action-packed Season 3 finale, in which a gang of Cobra Kai students broke into the LaRusso home and instigated a brawl, which leads to a series of events including Johnny Lawrence and his newly formed Eagle Fang dojo teaming up with Daniel and the Miyagi dojo to take on Kreese’s strike-first Cobra Kai — and the stakes have never been higher. If Miyagi/Eagle Fang outpoint Cobra Kai, John Kreese will shut down his dojo and disappear forever; if Cobra Kai prevails, Daniel and Johnny will close down their respective dojos and teach karate no more. Take that, “High Noon”!

Given Daniel and Johnny are both in their 50s, which means Kreese is like 75, it might be time for these men to stop attaching all this life-altering importance to karate tournaments involving kids — but “Cobra Kai” doubles down on the madness when Kreese contacts his old friend (and LaRusso tormenter) Terry Silver (Thomas Ian Griffith), who has a multi-million-dollar home and is living a sophisticated and upscale life — and yet is convinced to renounce everything in order to re-team with Kreese to whip Cobra Kai into fighting shape for the big tourney.

Meanwhile, Daniel’s wife Amanda (Courtney Henggeler) and Johnny’s on-and-off love interest Carmen (Vanessa Rubio) behave like at least semi-grownups, while the next generation of fighters, including Daniel’s daughter Samantha (Mary Mouser) and Johnny’s son Robby (Tanner Buchanan) are forever getting into scraps and often switching alliances and don’t these kids ever STUDY or spend the night surfing Tik-Tok or doing whatever else teenagers do these days?

It’s all quite ridiculous and always entertaining, and as usual, the season ends with some heavy dramatics — and the tease of yet another blast from the past destined to make a major impact next time around.