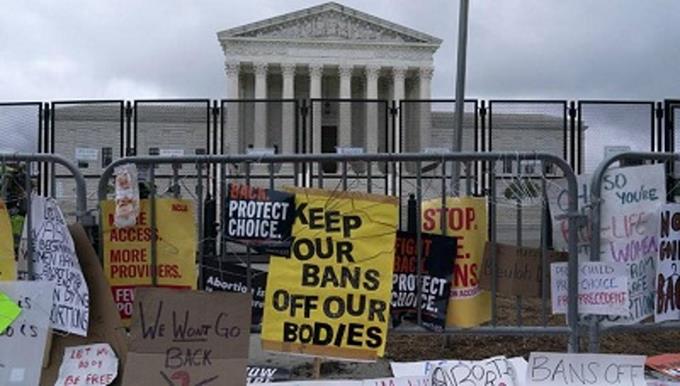 Every minute counts for abortion clinics in the conservative half of the United States, determined to maintain their activity as long as possible while awaiting a Supreme Court decision on which their future depends.

The leak this month of a draft Supreme Court ruling that would revoke the constitutional protection of the right to abortion in the US. it has imparted a sense of urgency to the operations of these health centers, which in many cases have been preparing for such a decision for years.

“We knew that the day could come when safe and legal abortion would be decimated in our countryand now we are facing that reality,” the regional president of the Planned Parenthood organization in five states in the north of the country, Sarah Stoesz, told Efe.

If the Supreme Court repeals the precedent that legalized abortion at the national level in 1973each state will be free to prohibit or guarantee this medical serviceand 26 conservative-led states are expected to restrict the voluntary termination of pregnancy.

Thirteen states even have laws designed to ban abortion virtually immediately as soon as the Supreme Court overturns the 1973 ruling, known as “Roe versus Wade,” which guarantees abortion until around 23 weeks’ gestation.

Not knowing when the failure will come

The situation is especially delicate in states like South Dakota, where there is only one clinic that performs abortions and this medical service will be prohibited in all cases -except extreme risk to the life of the pregnant person- as soon as the Supreme Court issues its decision.

See also  Epidemic: “Switzerland must authorize a vaccine against monkeypox”

“Our doors are open and will remain open every day to provide abortion services, for as long as legally possible,” said Stoesz, whose organization depends on the last remaining clinic in South Dakota.

The final decision of the Supreme is expected to arrive before the end of Junebut the impossibility of predicting when exactly that failure will occur is a source of stress for many centres.

“By the time we hear the Supreme Court say that ‘Roe versus Wade’ is no longer in effect, we have to literally stop all abortions or we could be in legal trouble,” Robin Marty explained in a recent interview with local network WVTM13. .

Marty is director of operations at one of the three clinics still offering abortion services in Alabama, where a near-total ban is likely to go into effect after the Supreme Court ruling, exposing those who perform voluntary terminations of pregnancy to death sentences. up to 99 years in prison.

Reinvent yourself, move… or close

In a recent article, Marty stressed that his clinic – the West Alabama Women’s Center – will not close if it has to stop performing abortions, and detailed his plan to turn it into a center that supports reproductive rights and “fills in the gaps” in medical care for low-income people.

“When abortion is illegal, patients will manage their own (abortion) care and they will need a safe place to get medical follow-up without fear of being reported to the police,” Marty wrote in Time magazine.

The plans are different in Mississippi, where there is only one clinic that performs abortions and there is a law that would ban the practice immediately if the Supreme Court ends “Roe versus Wade.”

See also  This makes your own four walls safer

“We have decided to open a new facility in New Mexico, (a state where the right to abortion is protected),” the director of the last clinic in Mississippi, Shannon Brewer, told The Washington Post.

New Mexico is one of the states where hundreds of patients from Texas have moved since last Septemberwhen an almost total ban on abortion came into force in that territoryand now it also receives some from Oklahoma, where an identical ban has been in force since this month.

“The same question that our patients are asking us over and over again – ‘why do I have fewer rights than my neighbors?’ – will soon be a reality on a national level,” the head of Planned Parenthood in Oklahoma lamented in statements to Efe, Missouri, Kansas and Arkansas, Emily Whales.

Planned Parenthood operates the largest network of sexual and reproductive health centers in the US, and its clinics are expected to remain open to provide other services after the Supreme Court ruling, but others that only perform abortions will have to close or reinvent themselves.

That battle for survival is not new: With nearly 500 abortion restrictions passed in conservative states in the past decade, clinics that provide abortions have long since become a rarity in parts of the South and Midwest.

Thousands of women must travel enormous distances every year to be able to abortand the states where that right is protected have received a huge flow of patients from Texas in recent months, in a prelude to what is to come after the Supreme Court ruling.

“We are doing everything we can, such as expanding our hours, to ensure that we provide safe and high-quality care to all patients who arrive,” Amanda Skinner, head of Planned Parenthood in Connecticut, told Efe, which plans to reform its laws to expand the right to abortion.