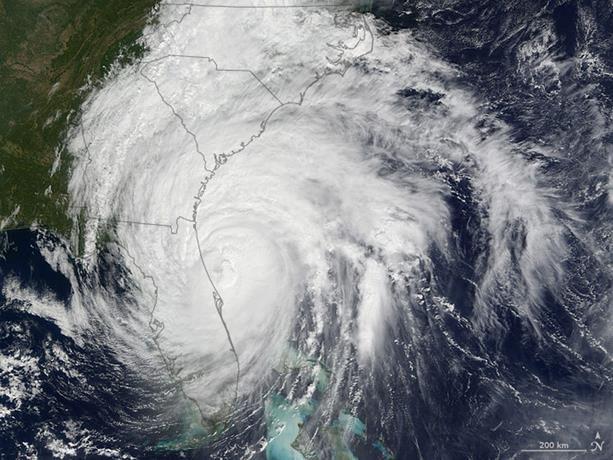 Climate change caused by human activity has caused the rains generated by hurricanes in the Atlantic basin to be more copious and dangerous, according to an eStony Brook University study, which is part of the State University of New York system, released this week.

Researchers analyzed rainfall data during cyclones from the 2020 North Atlantic hurricane season and compared it to pre-industrial (1850) era data.

The study found that hourly hurricane rainfall totals were up to 11% higher in 2020 compared to 1850, something worrying if one takes into account that floods due to intense rains are one of the main causes of mortality from hurricanes and tropical storms.

According to the US National Oceanic and Atmospheric Administration (NOAA), the 2020 North Atlantic hurricane season broke records for the number of storms, with 30 cyclones, and caused a record billions of dollars in damage.

The study, which was published in the specialized media Nature Communications, points out the increase in greenhouse gases in the atmosphere by human activity has caused an increase of more than one degree Celsius in the global temperature of the Earth’s surface in 2020 compared to 1850.

This in turn caused an increase in the sea surface temperature in the North Atlantic of 0.4 to 0.9 degrees Celsius in 2020.

Kevin A. Reed, an associate professor in the university’s School of Marine and Atmospheric Sciences (SoMAS) and the study’s leader, noted that storms that produce heavy rain are “even more dangerous” causing severe flooding and storm surge.

“Our findings indicate that human-caused environmental changes are signaling more and faster rainfall,” he said.

The research team applied a methodology called retrospective attribution (similar to a weather forecast, but for an event in the past) to quantify the impact of climate change in extreme rainfall during the 2020 North Atlantic hurricane season.

At the same time they used the Large Ensemble of the Community Earth System Model (CESM) which encompasses simulations from the year 1850 onward to estimate human-caused environmental changes.

Reed noted that this is the first work to apply retrospective attribution to all storms in a hurricane season.

The authors of the analysis determined that climate change caused a 10% increase in the accumulated amounts of extreme precipitation during tropical storms, while in the case of hurricanes this increase was 11%.

“These changes in extreme rainfall associated with the North Atlantic hurricane season are a illustration of the possible impacts of climate change in tropical cyclone rainfall in other ocean basins,” the researchers noted.

This week, Ken Graham, director of the National Hurricane Center (NHC), warned South Florida residents to be very vigilant about the upcoming North Atlantic hurricane season, which officially begins June 1, as “Looks” like they’re “going to be busy again.”