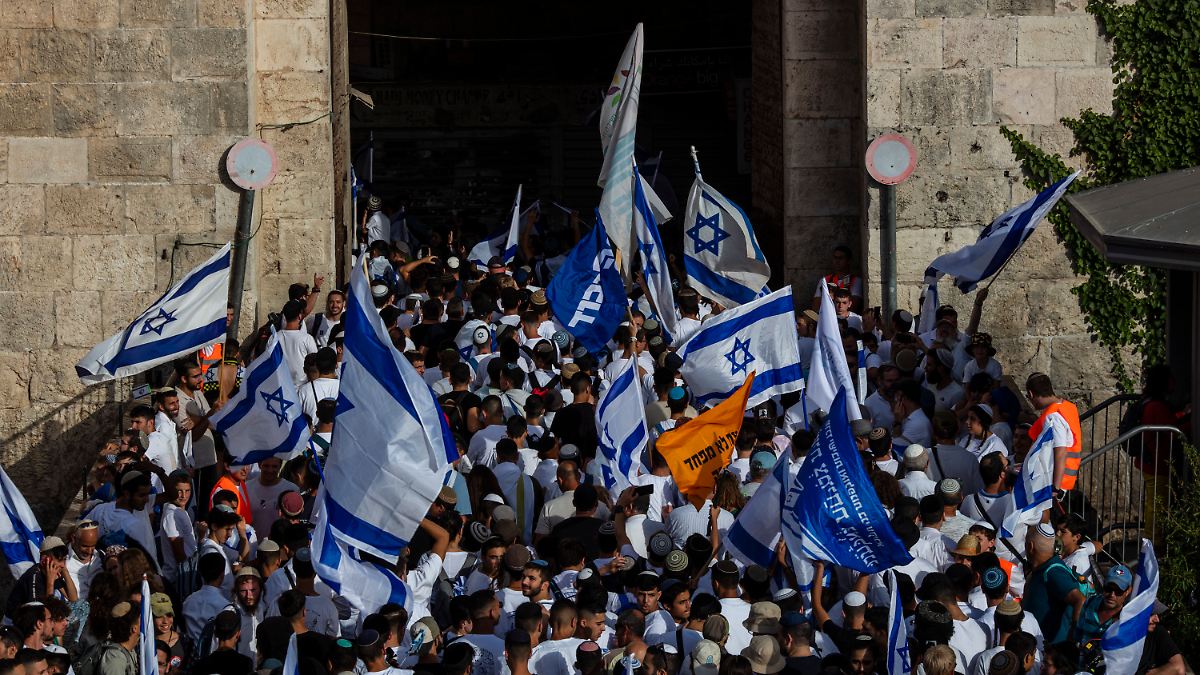 Jerusalem Day riots in 2021 lead to a days-long escalation of violence between Israel and Hamas in the Gaza Strip. This year, too, the “flag march” mobilizes ultra-nationalist Israelis. Even before that there are confrontations with Palestinian believers.

The controversial “flag march” by ultranationalist Israelis in Jerusalem on Sunday triggered new tensions. Around 70,000 people took part in the march through the old city of Jerusalem in the afternoon, with high security precautions. The police reported more than 60 arrests. According to the Red Crescent, 79 Palestinians were injured in Jerusalem.

The Israeli police were on high alert. Around 3,000 police officers were mobilized for the controversial march by nationalist Israelis to commemorate the Israeli occupation of East Jerusalem in the 1967 Six-Day War.

Thousands of participants in the “flag march” streamed through the Damascus Gate into the old town in the afternoon. “This is our country,” said 18-year-old Jewish Israeli Ofer Amar. “The Palestinians are guests in our country.” Dozens of Israelis hoisted flags at the gate while others sang and danced on the surrounding steps, where there had been scattered clashes leading up to the march. “Death to the Arabs,” shouted some Israelis during the “Flag March.” Palestinian counter-demonstrators threw stones at the parade from rooftops.

Several counter-rallies took place in the occupied West Bank. Palestinian demonstrators clashed with Israeli security forces. More than a hundred Palestinians were injured, according to the Red Crescent.

Many visitors on the Temple Mount

On Sunday morning, around 2,600 non-Muslims, more than usual, visited the Temple Mount, including many Jews as well as tourists. Police reported isolated confrontations and arrests. According to them, some Jews had violated the “visiting rules” on the Temple Mount, and Palestinians responded by throwing stones. According to the Palestinian Red Crescent, 79 people were injured in isolated clashes in the old city.

For Muslims, the hill with the Dome of the Rock and the Al-Aqsa Mosque is the third holiest site after Mecca and Medina. But Judaism also reveres the Temple Mount as its holiest place. It is under Muslim administration; To avoid provocation, Jews – like other non-Muslim visitors – are allowed to visit the Temple Mount at certain times, but not to pray there. The Israeli police monitors the security of the site. However, nationalist Israelis deliberately break the prayer ban time and again.

The right-wing MP Itamar Ben Gvir, known for his provocations, was among the Israeli visitors to the Temple Mount in the morning. With his visit, he wanted to show that Israel also has sovereignty over the Temple Mount, he said afterwards.

Last year, around Jerusalem Day, there were serious clashes between Israeli security forces and Palestinians in East Jerusalem. The riots culminated in an eleven-day escalation of violence with mutual heavy rocket fire between Israel and the ruling Hamas movement in the Gaza Strip. More than 270 people were killed, most of them Palestinians.

Israel annexed the eastern part of Jerusalem in 1980. The annexation is not recognized internationally. Israel has declared all of Jerusalem its “indivisible” capital, while the Palestinians want to make East Jerusalem the capital of their aspired state.

The conflict between Israel and militant Palestinians has intensified again in recent weeks. Since March, 19 Israeli civilians have been killed in anti-Israel violence by Palestinians and Arab Israelis.

The Israeli security forces responded with operations in Israel and the Israeli-occupied West Bank – especially in the area around Jenin, a stronghold of armed Palestinian groups. Three Israeli-Arab attackers, a police officer and 35 Palestinians died in Israel and the West Bank. Among the dead were members of armed groups, but also civilians and journalist Shirin Abu Akleh, who was shot dead while reporting on an army operation in Jenin.