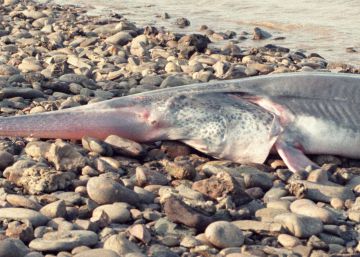 The year 2020 opens its doors with the alarming confirmation of a new extinct species: the Chinese giant oarfish up to seven meters long. The animal, The sword Psephurus, lived on the Yangtze River, the third longest in the world with more than 6,300 kilometers and the cradle of more than 400 different species. Since 2009, the so-called “king of freshwater fish” shows no signs of life, but scientists waited for clearer evidence before giving it up.

A study recently published in the journal Science of the Total Environment explains that the species suffered a clear decline since 1970 as a result of overfishing and fragmentation of its habitat. In addition, in 1981, humans built the Gezhouba Dam, which blocked the migratory habits of an animal that needs to swim upstream to reproduce and descend again to feed. And the dates coincide. Between 1981 and 2003, the species was observed only 201 times —95.2% of sightings were before 1995— which since 1996 has been declared in danger of extinction, according to the red list of the International Union for Conservation of Nature.

The Yangtze River area has been undergoing intense economic development since the 1950s, with more than 40 cities along its banks. Today, it produces 40% of China’s GDP and supports a third of its population.

In 2003, another dam, the Three Gorges dam, was built and the situation worsened, ending with the last specimens of the oarfish that, in vain, were looking for new incubation sites. It was the year the last sighting was confirmed. The study by researchers from the Freshwater Biodiversity Conservation Laboratory of the Ministry of Agriculture and Rural Affairs of the People’s Republic of China confirms that the species has completely disappeared and probably between 2005 and 2010. During a comprehensive analysis throughout the region , experts have identified 322 distinct fish species, and none of them, “not even a single specimen,” was an oarfish.

The Yangtze River area has been undergoing intense economic development since the 1950s, with more than 40 cities along its banks. Today, it produces 40% of China’s gross domestic product and supports a third of its population, according to study data. Because of this growth in favor of human well-being, that of animals has been forgotten. More than 70 aquatic animals are classified as protected species on a national or international scale. Under so much industrial pressure and due to water pollution, the Yangtze River ecosystem could collapse, according to the study whose main objective is to optimize efforts to conserve fauna that urgently needs it.

Under so much human pressure and due to water pollution, the Yangtze River ecosystem could collapse

To Carles Lalueza-Fox, researcher at Institute of Evolutionary Biology, a mixed center of the Pompeu Fabra University (UPF) and the Superior Council of Scientific Investigations (CSIC), unfortunately, you are not surprised by these types of alerts. “I am afraid that these notifications will become more and more frequent and in a way show the limits of traditional conservation efforts, “he says.”Although the waters of the Chinese rivers have improved in quality in the last two or three years, thanks to government efforts, this improvement seems to have come late not only for this fish, but also, for example, for the Baiji, the Yangtze dolphin. , declared extinct in 2006, “he continues. After this disappearance and that of the Chinese shad in 2015, the Asian country’s government banned commercial fishing for 10 years, but it is still not enough.