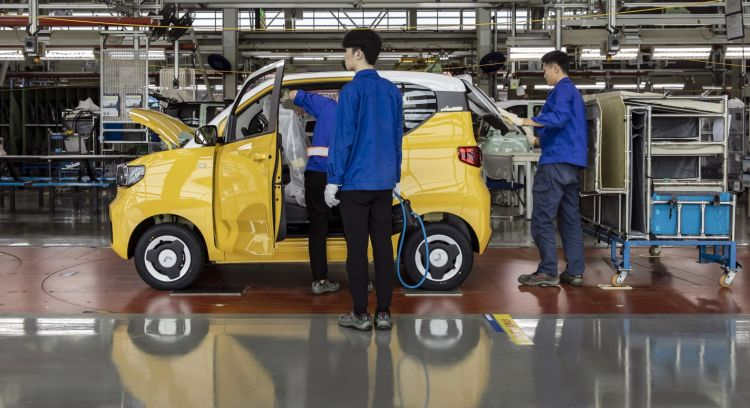 The phenomenon of the Wuling Hongguang Mini compact electric car is well known – with an initial price of $ 4,500, it surpassed the Tesla Model 3 in popularity in the home market last year. The Chinese manufacturer plans to release 1.2 million such compact and inexpensive electric vehicles next year. In the Chinese market, it is popular with women and is perceived as an accessory rather than a car.

Wuling Hongguang Mini electric vehicles are manufactured by an enterprise in the city of Liuzhou in southern China. The joint venture’s shareholders are SAIC Motor (50.1%), Guangxi Automobile (5.9%) and General Motors China (44%). Previously, it produced mainly angular micro-vanes with internal combustion engines, which were popular among the male population in China and in the commercial sector. The Wuling Hongguang Mini electric car largely inherited the features of their design, but the weaker sex really liked it – about two-thirds of sales are provided by young women. This is facilitated by the manufacturer’s orientation towards promoting products through social networks, and a wide range of colors from 20 shades, and good opportunities for individualization of design.

If an electric car itself with a power reserve of about 100 km costs from $ 4500 to $ 6000, then some owners are ready to spend up to half of this amount on interior decoration and external decor. In total, the manufacturer from Liuzhou sold 1.6 million vehicles with various types of power plant last year, which is 4% less than in the previous year, but sales of electric vehicles and other environmentally friendly vehicles almost tripled to 174 thousand units. Plans for 2022 are even more ambitious with 1.2 million Wuling Hongguang Mini EVs alone. In fact, this is almost the same as the entire electric vehicle market in China last year.

The popularity of the Wuling Hongguang Mini in its hometown of Liuzhou has ensured a high level of market penetration of electric vehicles – here it reached 30% among new vehicles against 6% on average in China. The crisis in the semiconductor industry could not but affect the production of Wuling Hongguang Mini, which contains about 100 semiconductor components. In May, 15% fewer cars were produced than planned. The model will evolve to maintain market positions. In addition to the open-top version, the base model of the electric car will undergo an update before the end of the year, and the two-seat compact version should attract the attention of male youth.