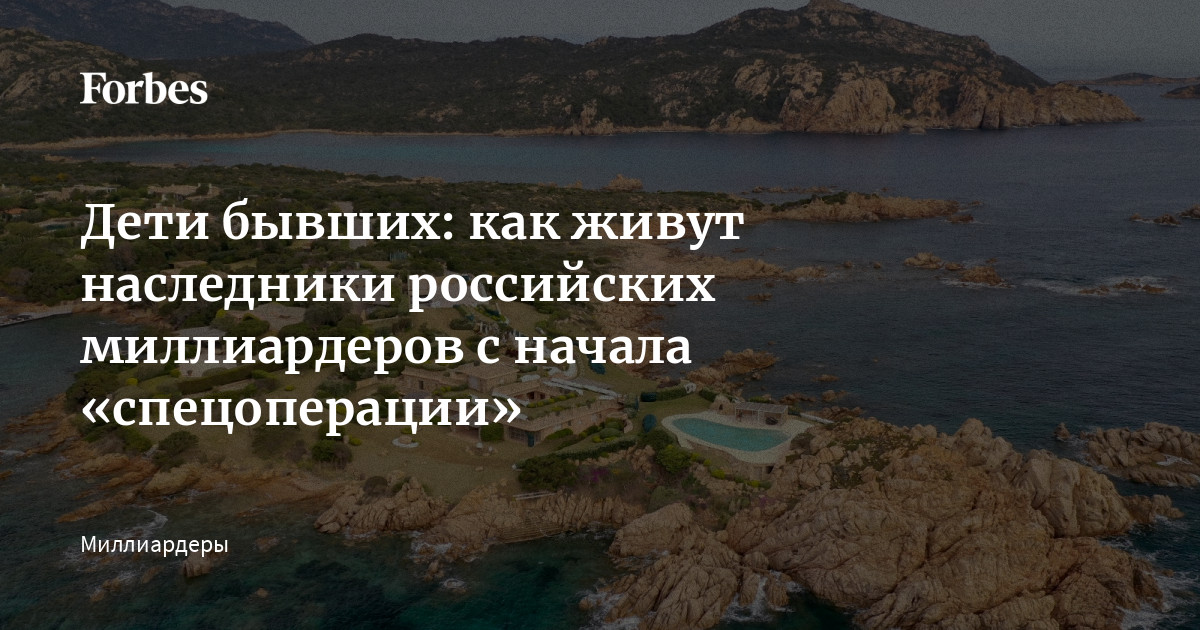 Children of the former: how the heirs of Russian billionaires live since the beginning of the “special operation”

Most of them live in the countries of the European Union, Great Britain and the USA.
Both daughters of the co-owner of Novatek and Sibur Gennady Timchenko, Ksenia Frank and Natalia Browning, as well as Ksenia’s husband Gleb Frank, were under personal US sanctions. The latter, after the imposition of sanctions, was forced to sell controlling shares in the Russian Crab Group of Companies and the Russian Fishery Company.

Andrei Guryev, the youngest, who headed the PhosAgro company for almost 10 years (its main beneficiary is his father Andrei Guryev), fell under EU sanctions and was forced to resign.
Nikita Mazepin, the son of Dmitry Mazepin, co-owner of Uralchem ​​and Uralkali, at one point lost his place in the Haas Formula 1 racing team and ended up on the EU sanctions list. The eldest daughters of the founder of Alfa Group and LetterOne Mikhail Fridman, Laura and Katya, did not fall under the sanctions, but their mother suffered the same fate – the European Union imposed sanctions against Fridman’s ex-wife Olga Aiziman in April. As a result, the girls lost part of their inheritance and source of income – in early May, the French authorities arrested the 580-sq. m in Saint-Tropez on the French Riviera. During the season, the Friedmans rented it out for €4,500 per day.

Those who have not been affected by sanctions restrictions also face problems abroad. Russians are massively, indiscriminately closing bank accounts. Many Russian owners of not the most expensive real estate in Europe simply cannot pay utility bills. Everyone is at risk of this, regardless of political views.

Businessman Yevgeny Chichvarkin, who left Russia long ago, had his Swiss bank account blocked. He told Forbes that he is seeking an unblocking and expects to do it out of court. The life of wealthy compatriots is overshadowed by the ban for Russians on flights to the UK on business jets. And it doesn’t matter if you want to fly on your own plane, on a friend’s plane or on a business charter.
In fairness, it should be said that the vast majority of the heirs of the oligarchs either did not encounter the manifestation of Russophobia or do not want to talk about it. But Forbes still managed to find a couple of examples.

The case in Pittsburgh

On March 17, 2022, the Pennsylvania Pittsburgh Police Department tweeted that law enforcement officers were investigating several cases of harassment and intimidation against a male resident of the town. It followed from the report that the signs installed in the courtyard of the victim’s house were mutilated with political and “anti-national” slogans, a bag of rice was thrown on the lawn in front of the house, and verbal insults and threats were made to the victim. Since the end of February, the man and his family have been subjected to such attacks several times.

Later it turned out that the injured unnamed resident of Pittsburgh is none other than the 23-year-old heir to the president of Norilsk Nickel, Vladimir Potanin. Vasily Potanin is a son from his first marriage, the terms of the termination of which his mother Natalya Potanina is still trying to challenge in the courts. Vasily moved to America in 2014, studied first at the Friends Academy in New York, then at the Tepper School of Business at Carnegie Mellon University, and is now completing a double degree in business administration with a focus on finance and a bachelor’s degree in economics from the College of Information Systems and public policy named after Heinz at the same Carnegie Mellon University.

In 2019, Vasily bought a $1.24 million house in Pittsburgh in Shadyside, a 10-minute walk from the university. The city is home to wealthy Americans who traditionally support the Democrats. Vasily, on the other hand, adheres to other views and demonstrates this with his signs in the yard. As Potanin Jr. told local TribLIVE, he reads The Wall Street Journal and enjoys listening to Ben Shapiro’s podcast that makes fun of the Democrats.
Vasily Potanin does not have American citizenship, he cannot vote in elections, nevertheless he actively expresses his political position.

On the lot in front of his house, there is a sign with the image of former US President Donald Trump and the words “Do you miss me yet?” insults to President Joe Biden, consonant with “F *** Joe Biden”). According to Potanin, his position has previously caused rejection among some local residents, and his signs were spoiled even before the 2020 elections, but there were no pogroms. He did not contact the police, he simply observed the situation. “There was some hypocrisy in the fact that people did not agree with me and desecrated my posters, but at the same time claimed that they were tolerant,” the young man said in an interview with TribLIVE.

The situation really escalated at the end of February 2022, after the start of Russia’s “special operation”* in Ukraine. According to Potanin, neighbors have attacked him several times already. They not only destroyed his signs on the site, but also threw a bag of rice with a letter tied to it on the lawn. It called him an ally of President Putin and rudely recommended him to leave for Russia. “People think that because of my nationality, I have to agree with everything that Putin does. Therefore, I must support him, I am his spy, I work for him. Their logic is twisted,” he told TribLIVE. In the end, Vasily turned to the police.
After conducting a preliminary investigation, the police identified the people who pursued the young man. It was a local couple, Rob Pfaffman, 66, and his wife, Lisa Marie Haabestad, 64.

On February 24, the first day of the “special operation” in Ukraine, Pfaffman’s Facebook page (owned by Meta Corporation, recognized as extremist in Russia, activity is prohibited) posted an angry entry: “Trump and Putin are oligarchs among us. Vladimir Potanin owns real estate in Shadyside, and his son is a student at Carnegie Mellon University!” Vasily Potanin is convinced that he is being persecuted not because of his father, but simply because he is Russian. “It has nothing to do with him, he doesn’t live here, he’s never been to Pittsburgh, as far as I know, these people are just after me because of my nationality,” he said in an interview with Pittsburgh’s Action News.

The most unpleasant news

On the morning of March 5, 2022, the unsuspecting Nikita Mazepin opened his email and was very surprised. The heir to Forbes list member Dmitry Mazepin has been in limbo in recent days: rumors circulated in the media that the American Formula 1 team Haas, whose pilot was Mazepin Jr., could terminate the contract with him. The rider received a letter of termination of the contract just a few minutes before it was announced publicly. “I was supported by some of my colleagues in Formula 1, but for the Haas team I really became persona non grata in just one night. We were one team, participated in competitions all over the world together, but at one point no one else wanted to have anything to do with me, including the team director, ”says Mazepin Forbes.
A few days later, Nikita and his father came under EU sanctions.

The same reasons were given as those that appear in the explanations of the European authorities on almost all participants in the Forbes list and wander from document to document. The logic is linear: the oligarch works in sectors of the economy that provide a significant source of income for the Russian government, was present at a meeting with Putin on February 24, which means that he is part of the Russian president’s inner circle. Nikita was sanctioned only because of his father, by the way, a Haas sponsor. No other reasons are given in the justification.

The 23-year-old racer spent only one season in Formula 1. In the overall standings, Mazepin took the last, 21st place and did not score a single point. His best result was 14th place at the end of the Azerbaijan Grand Prix.
The gap between Haas and Mazepin occurred despite the official decision of the International Motorsport Federation (FIA) to allow Russian drivers to compete, albeit in a neutral status. The pilot intends to challenge this decision: “Moreover, they did not return the sponsorship money advanced for the whole season, which is really outrageous.”
There is something to fight for. Simultaneously with the termination of the contract with Nikita, Haas unilaterally terminated the sponsorship agreement with Uralkali.

In response, Uralkali demanded the immediate return of the €12 million already transferred. Haas not only refused to do this, but also demanded €8 million in compensation for “lost profits”. The parties will prove their case in court.
Whether Nikita himself will challenge the sanctions, he does not yet know. “There are a great many problems in the world now, and mine are incomparable with them. On the other hand, I have the opportunity to fight the sanctions, and I believe that they are unfair, ”the driver argues.
He directed his efforts to create a fund to support athletes excluded from competitions for non-sporting reasons. The foundation, called We Compete As One, is already registered and hiring, with an official launch scheduled for summer 2022. The amount of funding will be “tens of millions of rubles”, there will go funds pledged to finance Haas.
Nikita himself does not lose hope of pursuing a career in motorsport outside of Formula 1. “The most important thing now is not to lose the spirit of sports,” he said.

* According to the requirement of Roskomnadzor, when preparing materials on a special operation in eastern Ukraine, all Russian media are obliged to use information only from official sources of the Russian Federation. We cannot publish materials in which the ongoing operation is called an “attack”, “invasion” or “declaration of war”, unless it is a direct quote (Article 57 of the Federal Law on the Media). In case of violation of the requirement, the media may be fined 5 million rubles, and the publication may also be blocked.