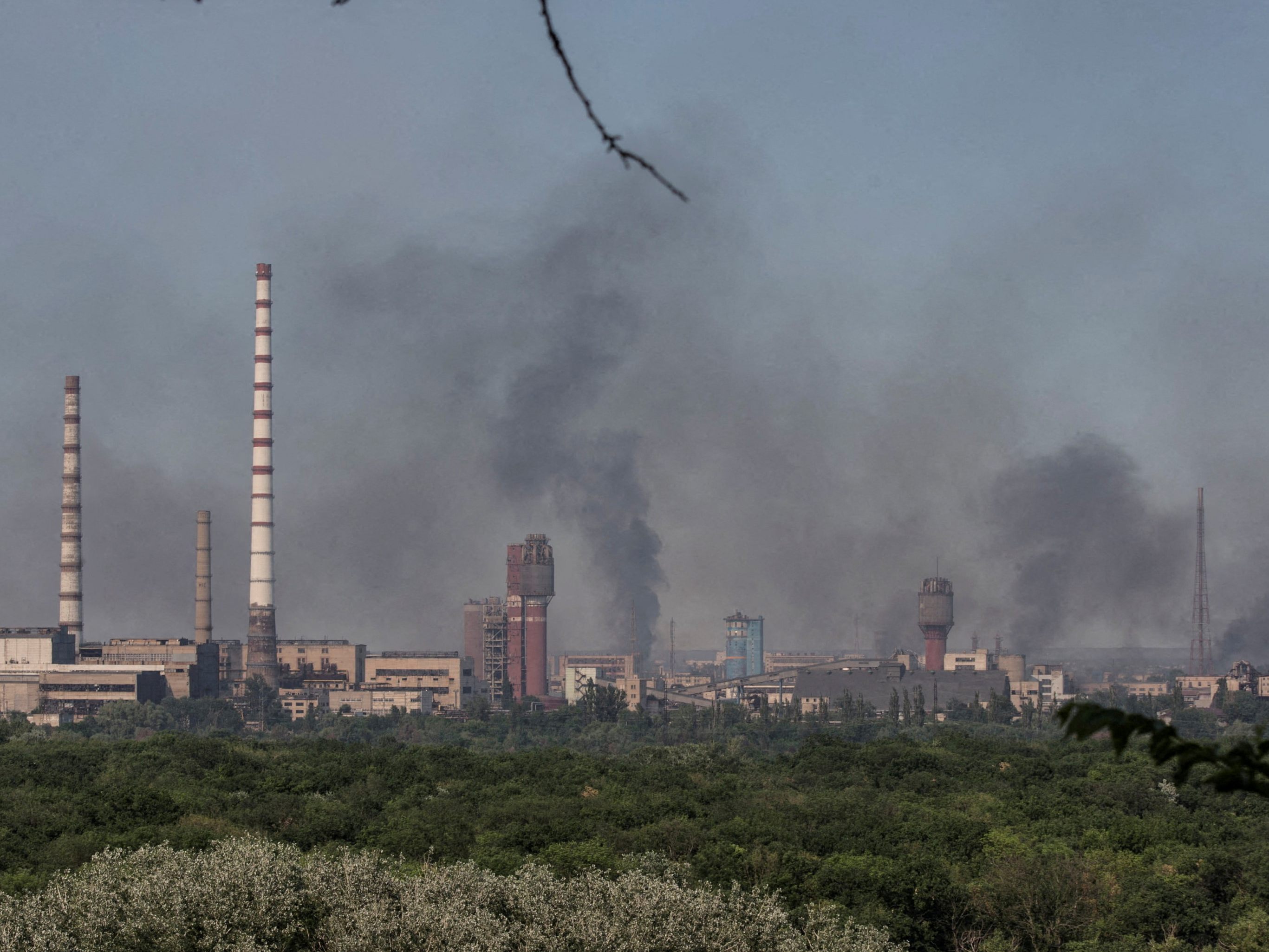 According to Ukrainian sources, the Azot chemical plant in the heavily contested administrative center of Sievjerodonetsk was almost completely destroyed by Russian artillery and rocket fire. A Russian ship is said to have been hit by rockets in the Black Sea.

“There are no surviving administrative buildings on the territory of the chemical giant,” military governor of the eastern Ukrainian region of Luhansk, Serhiy Hajday, wrote on Telegram.

Fighting for Sieverodonetsk continues after destruction of chemical plant

The general staff made similar statements in its situation report: “The fighting for complete control of Sievjerodonetsk is continuing,” it said. The enemy is moving more rocket artillery into the area. The General Staff and Hajdaj unanimously reported repelling a ground attack on the Sieverodonetsk suburb of Zolote. Russian troops have meanwhile taken all residential areas in Sievjerodonetsk, and the Ukrainian defenders entrenched themselves in the industrial zone around the chemical plant. Attempts to evacuate civilians, who are also said to be staying in the facility, have so far failed.

According to British intelligence experts, Russian troops are continuing their efforts to close the ring around the city of Sieverodonetsk from the south. “In the past 24 hours, Russian forces have probably continued to try to gain the upper hand on the Popasna axis, from which they want to encircle the Sievarodonetsk pocket from the south,” the website said in the daily update on the Ukraine war by the British Ministry of Defense Friday morning.

See also  Covid-19: the morgue and resuscitation on the verge of saturation

Russian offensive on Sloviansk failed for the time being

According to the general staff, a Russian offensive further west on another strategic target, the Sloviansk conurbation, has failed for the time being. The attempt by the Russians to take control of the village of Bohorodichne, 20 kilometers north of Sloviansk, on the opposite bank of the Seversky Donets river was repulsed.

There are Russian airstrikes in the direction of Avdiivka in the Donetsk region, heavy artillery shelling in southern Ukraine on the border between the Kherson and Mykolaiv regions, while the Ukrainians there, according to their own statements, carried out several airstrikes on Russian positions. The information cannot be verified independently.

According to the authorities, Ukrainian forces hit a Russian Navy tugboat with rockets in the Black Sea. The ship “Vasily Beg” was with soldiers, weapons and ammunition on the way to the Russian-occupied Snake Island south of the Odessa region, said regional governor Maxym Marchenko.

Resistance in Russia to Ukraine War

Despite polls suggesting that the majority of Russians support the war in Ukraine, there are “elements” of the Russian population that are actively and passively expressing opposition, the British experts said. A Russian-recruited unit called the Freedom for Russia Legion almost certainly takes part in combat operations alongside Ukrainian forces.

The skepticism about the war is particularly great in circles of the business elite and the oligarchs. Exit requests suggested that $15,000 millionaires were attempting to leave Russia, the intelligence update said.

Since the start of Russia’s war of aggression almost four months ago, the British government has regularly released intelligence information about its progress. Moscow accuses London of a targeted disinformation campaign.