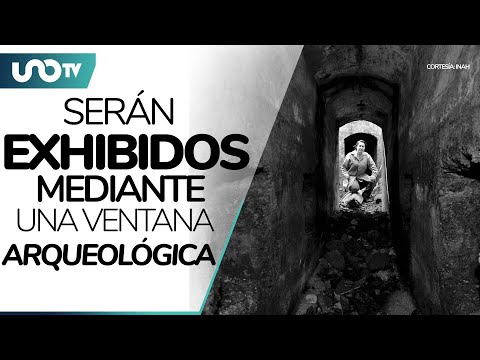 In some areas of Chapultepec Forest the industrial past that lies under the tree cover has been revealed through various archaeological rescues; This was published by the Ministry of Culture of the Government of Mexico, through the National Institute of Anthropology and History (INAH).

During the supervision of the construction works of the Chivatito pedestrian walkway, which will connect the first and second sections, a team from the INAH has discovered traces of ancient Factory national of cartridges (FNC).

What did they find in the Chapultepec Forest?

The architectural remains related to the FNC, from the beginning of the 20th century, as well as other older ones, corresponding to sections of adobe walls that belonged to Casa Mata, the fort colonial destroyed during the Battle of Molino del Rey against US troopson September 8, 1847, were located at one of the ends of what will be this pedestrian path: Rosario Castellanos Park.

Maria de Lourdes Lopez Camachoa researcher at the National Museum of History (MNH), was commissioned by the Archaeological Salvage Directorate of the INAH to direct the team of archaeologists that monitors the works of the Chivatito pedestrian walkwayand to the tasks of reforestation.

For her, this has meant corroborating her hypothesis: the promontory that can be seen in Rosario Castellanos Park, right in the area where the monument to this writer is located, is not natural. In reality, she describes, it is a thin layer of earth that hides the FNC’s construction complexes that, due to their massiveness, could not be demolished when they moved to Santa Fe.

In 2016, some archaeological rescues had allowed him to detect FNC patios, and two years later other parts were located, which “It is extremely important because it is the cornerstone for the modern history of the Mexican Army in the center of the country”.

“Before the Mexican Revolution, the Army functioned in a dispersed manner, and at the dawn of the 20th century, steps were taken to concentrate the military industry in one place; understand the construction of an infrastructure for the support of the military body, which required the manufacture of the supplies themselves: weapons, ammunition and machines, but also uniforms”

This idea, he points out, began to take shape at the end of the 19th century, in the Government of Porfirio Diazwith the acquisition of land from Rancho Chivatito, but it materialized with the presidential succession of Francisco I Maderoand would be strengthened in the Venustiano Carranza.

With the cartridge factory, Mexico depended less on US weapons

In a statement released by the INH it is detailed that the initiative allowed our country less dependence on US weapons, on the eve of the First World War.

From that past, which is a source of pride, the archaeological rescue team of the INAH managed to release a “sample” of its facilities, whose use has not been defined, since the FNC not only manufactured cartridgesbut also gunpowder and also had a foundry area.

“The space that we were able to free up extends over 15 square meters and has different levels of large concrete blocks and oil-stained concrete, at ground level and 3 meters below, where there are small tunnels that must have been used to give maintenance to the machinery, which was anchored with screws and rods of several inches”

These massive constructions were left for posterity

By the end of the 1940s, the factory fell into disuse, and all that machinery was dismantled to take her to Santa Fe; however, the dismantling of the FNC was not total, since these massive constructions were left for posterity, even though the area would become in the 1950s part ofl Chapultepec Forest.

See also  Afghanistan is the world's largest opium producer: this is the drug addiction crisis under the Taliban | Univision World News

Lourdes Lopez Camacho He trusts that these testimonies can remain on public view in an archaeological window, as one more sign of the extensive history of the area.

Added to these vestiges is a considerable quantity of lead and brass ammunition, bullet tests, blasting caps and bullets with the FNC stamp, which show the production line that took place in the factoryand that they are protected of archaeological salvage.

walls of the fort Viceregal, standing in Casa Mata

From Casa Mata, a fort viceregal that looked at the Chapulín hillmemory was only had by documentary and utilitarian witnesses.

Lourdes López Camacho remembers seeing the fort in lithographs and in some cups made for the First Empire of Agustín de Iturbide (1822), decades before being the scene of the Battle of the King’s Millone of the bloodiest of the US intervention.

Knowing –by such references– that remains of Casa Mata could be found further north Chapultepec Foreston the same land as the Rosario Castellanos park, the archaeologist and her team explored this sector, finding sections of walls a couple of meters long and adobe steps, as well as other remains of walls with mortar embankment, a slope used in this type of buildings to avoid being climbed.