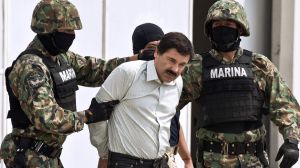 A few days ago it was revealed that the drug trafficker Joaquin “El Chapo” Guzman he sent a request to the president Andres Manuel Lopez Obradorin which he raises the possibility of being transferred to Mexico given the treatment he receives in a US prison.

Now it is known that said petition not only reached the Mexican president, but also the country’s Supreme Court of Justice (SCJN), specifically its president Norma Piña Hernández.

However, the document is only an autograph copy that is addressed to the presidents Andrés Manuel López Obrador and Joe Bidenas well as the United States Ambassador to Mexico, Ken Salazarwhere their intervention is requested so that the sentence imposed against the drug trafficker is pardoned and be repatriated to Mexico “under fair and humanitarian conditions”.

The document was sent by Chapo’s lawyer, Juan Pablo Badillo Soto, who assures that the accusations against his client in the New York Court were not previously made known to the Mexican authorities, nor were the defendant notified in advance. , as required by the International Extradition Law.

“I am a defense attorney and legal representative of Mr. Joaquín Archivaldo Guzmán Loera… at the present time, My defendant and represented is illegally deprived of his personal liberty in an extreme security prisonsuffering an illegal deprivation of his personal liberty, under a sentence of more than thirty years in prison that was dictated by the Federal Court of the Eastern District in Brooklyn, New York”, the letter indicates.

In this regard, Minister Norma Piña determined that there is no action to be taken by the SCJN, other than to acknowledge the matter.

Last week, another Guzmán lawyer, José Refugio Rodríguez, asked López Obrador and Biden in public statements that his client be returned to Mexico.

Refugio argued that El Chapo “has never seen sunlight again” in the maximum security prison in the state of Colorado where he is being held, since he was found guilty of 10 counts in July 2019 and sentenced to life in prison.

In addition, “has not had contact with a person who speaks Spanish” and “while the other inmates have visitors, four or five a month, he hasn’t had visitors in five years and the calls are few and restricted”, he assured.

You may also like:
– How is ADX Florence, the maximum security prison that Chapo Guzmán complains about.
– López Obrador is unaware of Chapo Guzmán’s request to be transferred to Mexico.