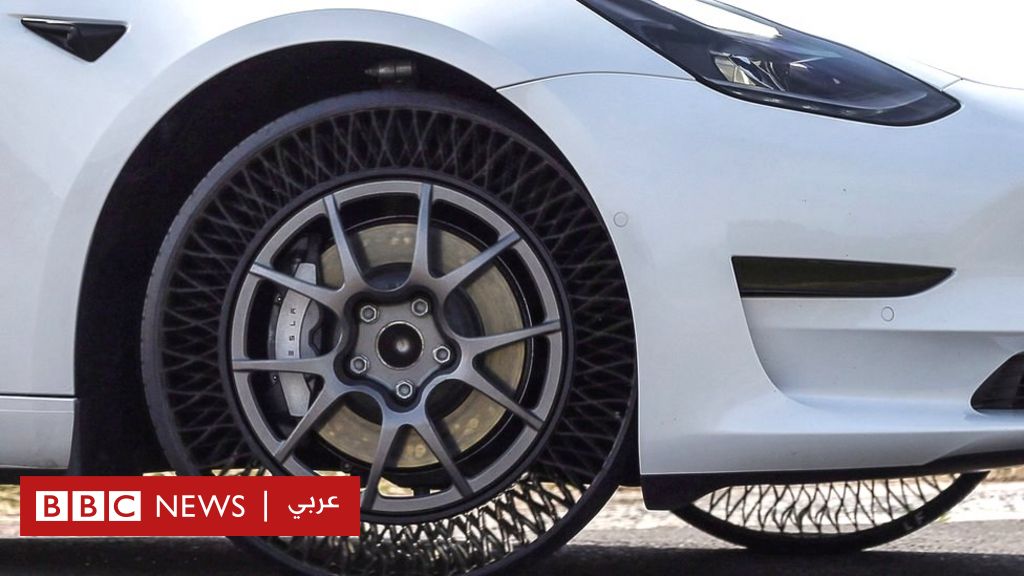 Cars: Will pneumatic tires become a thing of the past soon?

It’s still common to see a car driving with a flat tire or to see someone on the side of the road changing a tire.

Some still have to bear the cost of replacing a worn out tire prematurely, perhaps because they forgot to check their air pressure regularly as they should.

Sometimes it’s not hard to realize that tires are the weak link in a car, but is that about to change?

Is it the end of the airy black rubber cake that was first used in vehicles in the 1890s and produced to be indestructible, and therefore not easy to recycle?

On a test road in Luxembourg, a Tesla Model 3 sprints through tight corners, sprints, and stops when necessary and in an emergency. These are all scenes we are used to seeing, however, what is remarkable is that the car is based on four airless tires made by the famous American company Good Year.

The frame is special plastic struts, which support the thin rubber surface in contact with the ground. The struts bend and twist when the car is moving.

Michael Rachita, senior program manager for non-pneumatic tires at the American company, candidly talks about the obstacles and problems they face in this field: “There will be some noise and vibration. We are still learning how to make the tire as flexible as a pneumatic tire. But we think you will be surprised by its performance.”

Racchetta was not wrong about that. Electric cars and self-driving cars are changing the need for tires.

Delivery and transportation companies are looking for products that are maintenance infrequent, puncture-resistant, recyclable, and contain sensors that identify road conditions.

It is more and more popular to ride taxis with others in cities, rather than owning a car and a car with a puncture does not generate income.

“It is true that pneumatic tires will still be around, but a mix of solutions is needed. As we move into a world where self-driving vehicles are becoming more common and many cities are adopting service strategies for transportation and having a maintenance free tire is very important,” Rachita says.

At Goodyear Laboratories, tires are tested 24 hours a day, under different loads and speeds, and for thousands of miles without stopping.

Some of the struts deform and others break, Rachita says, but the tire continues to operate safely. We adopt a theory: experiment and learn from experience.

“We have reached an advanced stage and this is the essential thing for us,” he added.

Goodyear’s French competitor, Michelin, has been working with General Motors to make airless tires since 2019.

In February, media reports circulated that Michelin’s unique and resistant tires might debut in the new Chevrolet Bolt electric car, which General Motors plans to launch possibly as early as 2024.

The new Michelin Icar is made of a highly durable resin combined with fiberglass and a rubber compound (for which Michelin has registered 50 patents) to build a mesh frame that surrounds the aluminum frame.

Cyril Roget, an innovation and science expert at the famous French tire maker, did not confirm the news of the new tire but told the BBC that Michelin would have more to say later this year.

Michelin is a pioneer in the airless tire industry. These tires have been around since 2005 and are used in slow-moving vehicles, such as agricultural equipment.

But the development of technology for road vehicles presents an entirely different challenge. “We have 130 years of experience and knowledge in the manufacture and production of inflatable structures such as pneumatic tires, and the technology of airless tires is very modern,” says Roget.

The company that gave us the Michelin Big Man Inflatable Logo has a years-long plan to produce an airless, connected, 3D-printed tire made entirely of meltable and reusable materials.

Except for occasional tire retreading, these newer tires will not require maintenance, according to Michelin.

The heavy weight of the battery means that airless tires are especially suitable for electric vehicles. “They can carry more weight and feel more comfortable than pneumatic tires,” Racchetta says.

On the other hand, airless tires provide more contact with the road, which results in improved traction but increases traction and therefore more power is required to drive the wheels forward which affects battery life and range.

Then there is the noise and hum of rubber on contact with the road.

“As the engine noise goes away from the electric vehicle, the tires become the main source of noise,” says Matt Ross, editor-in-chief of Tire Technology International.

In addition, the rigid plastic struts transmit more vibration and drivers who have been accustomed to the responsiveness and performance of pneumatic tires for a long time may not be easily persuaded to switch to new tyres.

But what is more important than the consumer’s perception is what is decided by the authorities supervising the regulation of traffic and vehicles.

Governments will demand rigorous safety testing and standardization of rules. Tire makers will need to invest heavily in new manufacturing facilities and develop supply chains. This will take many years.

“Non-pneumatic tires are of particular interest to sectors such as the military, disaster response teams, security vehicles and specialized equipment,” Klaus Krause, head of European research and development at Hankook, tells BBC News.

South Korean company Hankook unveiled the latest model of its airless tires in January of this year.

Smaller than conventional tires, the company says, the honeycomb interlocking polyurethane struts are a breakthrough in handling lateral and horizontal stresses.

Bridgestone, the world’s largest tire maker, is interested in using these tires in the industrial, agricultural, mining and construction fields, where they may be in high demand by customers who face significant losses in the event of tire failure.

Airless tires will be very expensive at first, but being able to recycle them and 3D print them could be a game-changer.

Perhaps, some experts speculate, consumers won’t even need to buy these tires outright, but rather get them for free and then pay for the distances they drive with sensors monitoring them.

It’s an illustration of where tires will be in the future, as the only point of contact between the road and the vehicle and thus offer huge potential, says Sucia Cocerita Justin, analyst at Good Year’s Sightline Tire Intelligence.

Perhaps thanks to cloud computing and algorithms, connected vehicles can provide information about which roads government authorities should repair or when to spray salt during the snow and ice season.

Take another example, automatic braking systems. “If ABS can tell that a car is on semi-consuming summer tires, then it can respond faster.

“This feature could play an important role in the future, as the car will have to deal with that situation on its own,” she says.

Not all of this technology has to be limited to airless tires, and not all manufacturers are convinced that these are the tires of the future.

“To this day, we believe that pneumatic wheels are the best choice for most vehicles,” says Dennis Spurl, director of tire research and development at Continental, Germany.

Tires have to “meet the multiple requirements of safety, comfort, performance and sustainability all at once,” and pneumatic rubber remains the best compromise, she says.

Continental is developing a self-pumping system where air pumps and wheel sensors keep pressure at optimum levels. Like all manufacturers, the company is looking for “environmentally friendly” products.

Soon, polyester recycled from plastic bottles will be used to produce its tyres.

The companies “Good Year” and “Continental” are conducting research on the dandelion flower, which produces a latex similar to the rubber produced by rubber trees.

Spurl adds that sustainable alternatives to traditional materials are only available “to a degree”. Pneumatic tires have been around for as long as they are needed, they do a better job. “And we’re still convinced,” Spurl says.