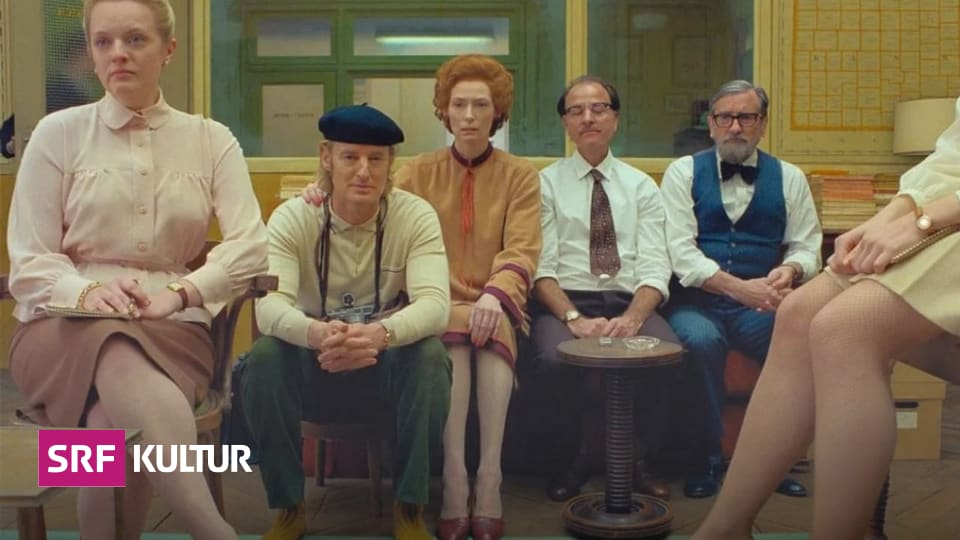 Old friends en masse, an ode to print: the new film by Wes Anderson – a design delicacy in retro style, of course.

The fictional French town on which Wes Anderson unleashed his ever-changing cinematic family this time is called “Ennui-sur-Blasé” – boredom in blasé. There is simply no time for boredom.

The title “The French Dispatch” is the fictional magazine that emerged from a weekend supplement of the prairie newspaper “Liberty, Kansas Sun”. The newspaper owner’s son (played by Bill Murray) had not only convinced his father to finance a trip to France for him, but also a whole correspondent’s office.

Anderson introduces us to the editorial offices in Ennui-sur-Blasé right at the beginning of the film, in homage to the French comedy genius Jacques Tati: with a waiter. We watch him from afar as he climbs the top floor of a house with his full tray, always visible in another window or stairwell.

A cranky and wealthy publisher who gives his even more eccentric authors the time and resources to write the most eccentric reports on the most eccentric topics. As long as they can manage to write in such a way “that it reads as if it had been written that way on purpose”.

Another slogan is written over his office door: “Don’t cry”. Do not Cry! This forms the framework for three examples from the story kitchen of the “French Dispatch”, which in turn result in three cinematic chapters.

First, however, the inimitable Owen Wilson introduces the town with all its dark sides. Then it’s about madness and art. A Rodin-like psychopathic murderer / artist (Benicio del Toro) paints abstract pictures in prison, for which the extremely strict guard Simona (Léa Seydoux) models naked. All of this mainly in black and white. Until the art dealer Julian Cadazio (Adrian Brody) smells a deal and begins to market the man.

Tilda Swinton recapitulates this whole story as a connoisseur of art scenes in a canary yellow costume and Margret Thatcher look.

In the second chapter Wes Anderson’s version of the student revolution of 1968 comes into play. And the third is about a kidnapping, the police and the food.

But all of this takes a back seat to the usual creative furor of Wes Anderson. Behind his central perspective recordings and sets, the stage tricks, the animation sequences and the seemingly endless succession of ideas, figures and absurd contexts.

Like all Wes Anderson films, The French Dispatch is quite unique and quite incomparable. It is best reminiscent of one of those artful pop-up picture books in which not only the pictures become three-dimensional, but everything can still be moved and tilted somehow.