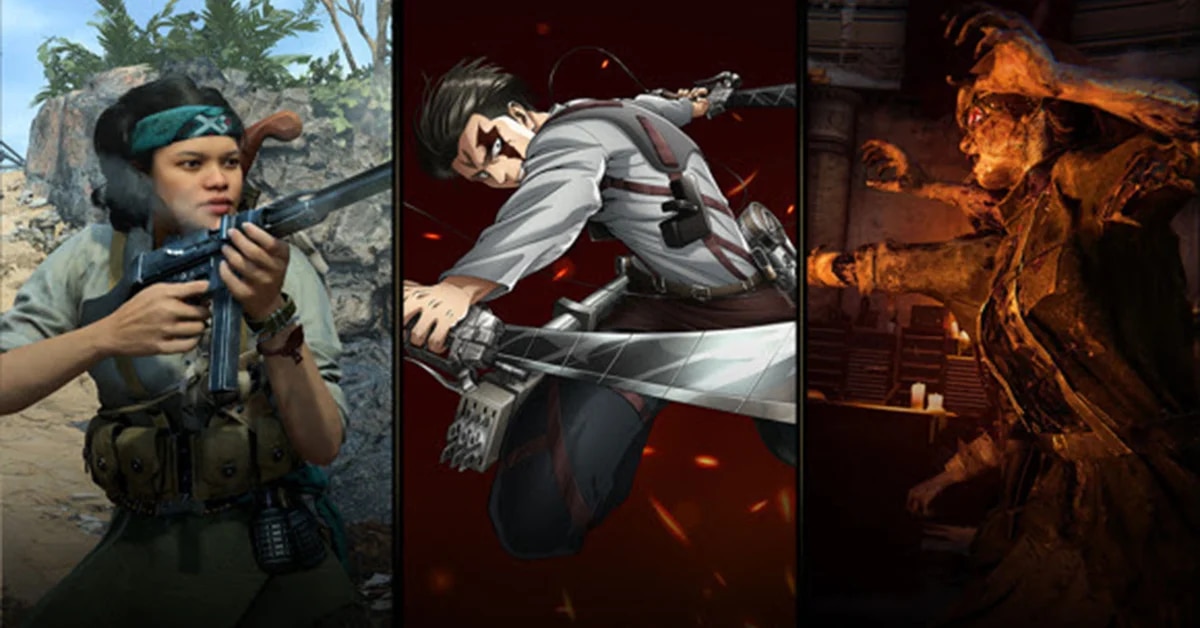 Call of Duty: know all the content that incorporates the first update of 2022

Call of Duty presented the first update of 2022 to Vanguard and Warzone Pacific and, with the announcement, they also detailed all the content to be incorporated. In addition to the much anticipated collaboration with Attack on Titan, Season 1 is going to add a lot of news for its players.

READ MORE: Attack on Titan comes to Call of Duty in a very particular collaboration

After a few weeks of rumors and leaks, the crossover with Attack on Titan, without a doubt, was the announcement that captured all eyes. The anime premiered this Sunday the first chapter of what will be its last season – although the possibility of seeing a movie as a conclusion still floats – and Call of Duty decided to celebrate the closing of the story with a tribute focused on Levi Ackerman.

With a lot that contains a total of 10 different objects, players will not only be able to wear the classic clothing of the Legion of Recognition, but you will also be able to access weapons and items with names that refer to different characters and situations from the manga and its audiovisual adaptation.

“A devastating invasion. A lost father. A vow of revenge ”. This is how the story of Isabella Rosario Dulnuan Reyes, the last operator to arrive at Task Force 006 Trident before the conclusion of Season One.

According to the presentation, this operator received martial arts training from her father when she was a child and after he died, she continued to develop her skills. As a melee specialist, she teamed up with Trident with the goal of uncovering the secrets of Caldera.

In order to access it, players will have to acquire the Wild Rose operator pack, which also includes two legendary weapons. As a bonus, users who have the three members of Trident -Francis, Lewis and Isabella- unlocked and with their maximum level, will have the possibility of accessing a special golden outfit for all three.

In the publication they anticipated that Zombies Vanguard will have several updates that will be released during this year and they highlighted that the news not only involves content that will arrive with this update, but they are anticipating what will arrive in the coming months.

The introduction of an endless classic game to ‘Shi No Numa’ in the new Void Objective, unlocked access to Von List’s office in Stalingrad, four new levels of artifact upgrades in Tome of Rituals, three unique Pack-a camouflages -Punch and more. The combat shield and crafted support Baka Streaks will also be added to the mix, along with weapon unlock challenges for the Katana and the new Welgun SMG, plus plenty of content in the works for Season Two. ” , they listed as the most important news for the players.

Updating Vanguard It was launched yesterday, January 11, but at 9 PM Pacific time, so that in some parts of Latin America it would be arriving in the early hours of today. The same will happen with the new version of Warzone Pacific, which will arrive 24 hours later. In this way, on January 13 from 9 AM (Pacific time) both games will be facing their first day of the mid-season update. The collaboration with Attack on Titan, meanwhile, will land a few days later, on January 20.

Dying Light 2 proposes more than 500 hours of gameplay to complete it 100%
A Minecraft mod enabled a new Doom-inspired campaign
Fortnite: Ninja Turtles and other Paramount franchises coming to the game