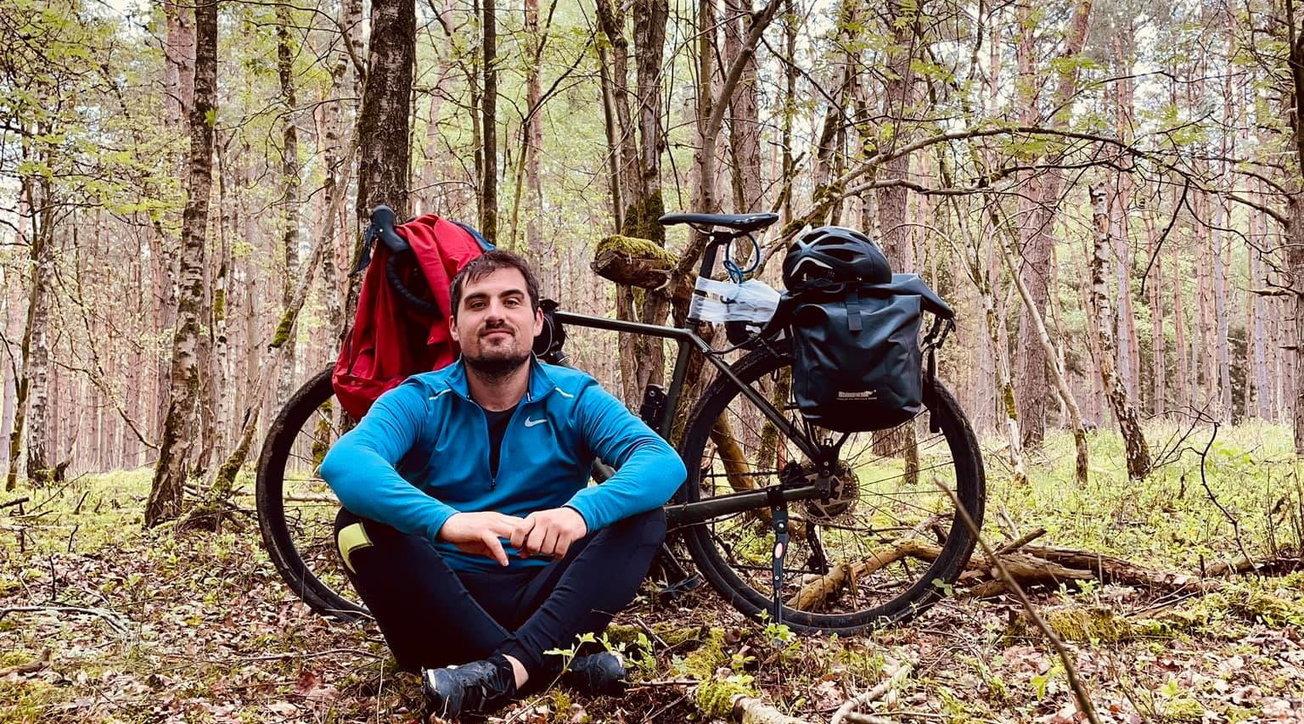 Francesco, the current ride (for more than 4 thousand kilometers) is, in reality, the second chapter of “Progetto Tramonti”. You embarked on the first one in June 2020, when you crossed the boot in 40 days. Where did the idea of ​​a “continuity” in Europe come from?
I state that last year’s trip, undertaken from Sicily to the Ahrntal to tell about Italy in one of the most difficult phases of its history, was organized in 4 or 5 days. I was sick of staying at home, my job was in crisis and I had some money to spare. So, on June 5, two days after the reopening between Regions, I left. After the experience in Italy, I felt the need to raise the bar. On the one hand, to get involved and overcome physical and psychological obstacles; on the other hand, to see with my own eyes the situation in individual countries at a time when there were still restrictive measures against Covid. A sort of direct documentation of the pandemic. In France, for example, where I spent the first 15 days of the trip, there was a curfew from 7 to 6, the shops were closed. In short, a very rigid situation.

Speaking of this, the main objective of “Progetto Tramonti” is to tell about Europe in the period of exit from the Covid emergency. In each country you have crossed, have you found different situations? Can you describe them?
I discovered a disunited Europe precisely starting from the management of the pandemic, from countries in which the measures are almost nil, such as Sweden, to those that instead have maintained a curfew, such as, in fact, France. Suffice it to say that when I arrived in Helsingborg, Sweden, after taking the ferry from Helsingør, Denmark, I noticed that I was the only one around with a mask. I inquired and found that it is not mandatory. Differences that also apply to borders. Individual states apply different rules: while Sweden and Denmark asked me for a passport, a negative Covid test and the reason for the move, everything was very quiet on the other borders. Instead, in Norway, which is also outside the EU, the most stringent restrictions await me. Among other things, it is not easy to juggle the anti Covid regulations of the various countries. The rules are not always all translated from the original language into English and, although the embassy sites offer all the necessary information, they do not deal with specific cases.

Which countries are the most organized with regard to anti Covid provisions?
The most organized for the little that I have been able to see is Denmark. First of all, any village has a Covid center for testing as well as vaccination centers. Secondly, in order to eat in restaurants, it is necessary to present a negative test carried out within the previous 24 hours. Finally, when I was in Copenhagen, I saw that soon there would be a festival, which could be accessed easily with a reservation, with a negative Covid test or with the vaccine done. A sort of Green pass.

The border theme particularly struck you …
Much. I am a child of united Europe. I had never encountered the difficulty of traveling in the Old Continent across the borders, limits and differences imposed by the policies of the various countries. So, for me, not seeing common action at European level was a reason for reflection that led me to discover myself as a convinced pro-European.

Tourism is one of the sectors most affected by the pandemic. How important are testimonials like yours to rediscover it?
It is very difficult in this field to identify very small clusters that can influence the demand. On a practical level, I don’t think my initiative can change anything. However, it can entice enthusiasts to make experiences like mine in a specific sector: cycle tourism.

Not just Covid. The idea is also that of a journey to rediscover slowness and simple means. Why this need?
To look closely at Europe. Thanks to the pace of the bike, fast but not too fast, I have the opportunity to see everything around me better. I can vary, move as I want, be free. It is also a way to experience tourist places less superficially. Furthermore, I arrive at the goal with a very different disposition of mind compared to doing it comfortably in the car: fatigue determines the quality of the final achievement.

What are the differences between the trip to Italy last year and this one in Europe?
The situations are very different. If I had left in June, perhaps I would have found the climate and Covid provisions more welcoming. And therefore had a better chance to meet people. What I missed a lot on this trip compared to the one in Italy, in fact, was human contact. Most of the time I spend it alone and this, at times, is stressful and demotivating.

An anecdote that has particularly impressed you?
The first week there was always bad weather. One day, I was in a small town between Annecy and Oyonnax in the French Alps. It had been raining heavily since the morning and I had to cover the last few kilometers, which were all uphill. I was about to cry. At one point, I got off the bike to check Google Maps and see how far away it was. I took shelter under a canopy when I saw an Amazon van pass by. The girl who drove it asked me if everything was okay, so I kindly asked her for a ride. At first, she looked at me puzzled, then she said, ‘Okay’. Of course, he couldn’t possibly get me into his pickup truck while he was working. However, he followed the moral law rather than the written one. And he did the right thing, I’m sure. Here, I remember this episode of generosity with a smile.

Isn’t a balance sheet missing at the end of this adventure?
At present, honestly, the balance is not entirely positive. In some moments, I felt very lonely. Even though I am aware that I am doing something big, fun and beautiful, emotionally I am a little sad. Not fully happy as I was last year.

The adventure, told through the Instagram (@frasquito_de_bobadilla) and Facebook (“Tramonti Project”) profiles, will become a documentary of the Sardegna Film Commission, financed by the Ministry of Foreign Affairs. What will it be about specifically?
The documentary, being made on behalf of Fabio Demontis and Roberto Muroni, who reached me just the other day with a camper here in Sweden, will retrace the stages of my journey and will collect stories of various compatriots who have moved across the border. From researchers to cooks: experiences of those who have left our country by getting involved.

Upcoming rides?
Immediately after returning to Sardinia, on 18 or 19 June, I would like to get back on the road immediately and take a tour of Sicily.