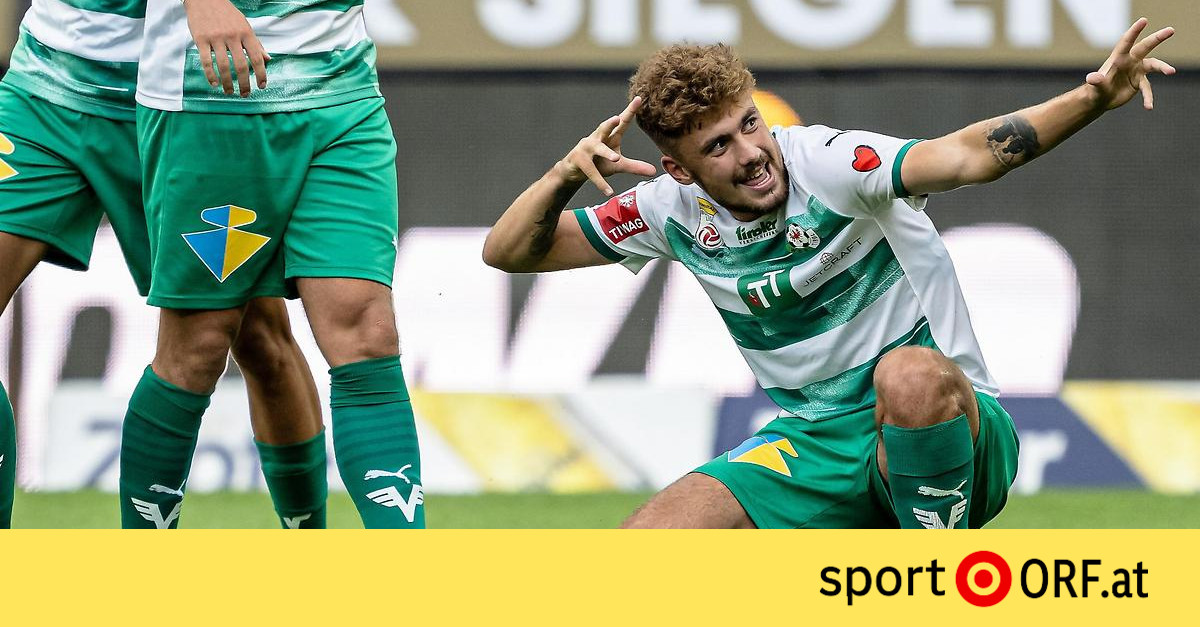 At the same time, coach Thomas Silberberger’s squad inflicted the first defeat of the season on the Hartbergers. The Tyroleans continued their good series against Hartberg from the previous season, when they achieved three wins and a draw against the East Styrians. Both teams are now holding three points from two games. Hartberg has champion Red Bull Salzburg as a guest in the next game next Saturday, a day later the Tyrolean Austria Klagenfurt.

Compared to the 1:2 in Lustenau, Silberberger made only one change at the start, the Slovenian Nik Prelec stormed instead of Lautaro Rinaldi and thus made his Bundesliga debut. TSV coach Klaus Schmidt meanwhile had to do without Donis Avdijaj, the double goal scorer from the 2-1 win against Altach was absent due to an ankle injury and was replaced by Dario Tadic.

Two goals just before the break

The guests made the first call after two minutes, Albert Ejupi’s header after a Tadic corner just missed the goal. After that, WSG dominated: Prica was about to take the lead for the hosts, but the Swede shot wide of the goal on the right after a Prelec pass in front of Hartberg goalie Rene Swete (9′). The Tyroleans now had chances every minute: Prica narrowly missed Prelec’s Stanglpass (10′), then Raffael Behounek headed in next to the guest goal (12′), and finally Prica escaped Patrick Farkas and forced Swete to score a strong shot with a powerful shot Save (13th).

After that, the East Styrians freed themselves from the Wattener encirclement and took the lead out of nowhere. Seth Paintsil served Ejupi, whose shot was initially blocked by Valentino Müller. Aydin sunk the rebound from 11 meters (37′). A lack of effectiveness had already been fatal to the WSG against Lustenau, and that was now threatening again. Ogrinec missed twice from long range (44′, 45′ + 1′) before the Slovenian finally scored on the third attempt for a well-deserved equalizer just before half-time.

In the second half, too, the Silberberger squad immediately took command. Prica again missed a top chance, after a nice combination via Prelec and Zan Rogelj, the 20-year-old failed from five meters at Swete (47th). A little later, a shot from Kofi Schulz landed in the Hartberger penalty area from a very short distance on Farkas’ elbow. Referee Stefan Ebner initially allowed the game to continue, but after studying the video, the referee still decided on a penalty. Prica then used this opportunity to score his second goal of the season (55th). Already a week ago he had scored from the point.

Schmidt tried to give his losing team new impetus with a triple substitution, and Tobias Kainz, who had just been substituted, almost gave his coach an equalizer. His shot went wafer-thin over the Tyrolean goal (71′). Shortly afterwards, Mario Sonnleitner had the 2:2 on the top of his head, but his header from a corner just missed his target (82nd). In the finish, Wattens missed good chances to make it 3-1, including through Prelec (88′) and Alexander Ranacher (96′).

See also  Leo Messi returns to Barcelona, ​​a week before the winter transfer market closes, and meets with Xavi, Busquets and Jordi Alba

Comments on the game:

Thomas Silberberger (WSG coach): “That was the closest possible score, but a well-deserved home win. We played as a team up to 2-1, we encountered four top-class players in the first 20 minutes and it should have been 2-0. Then you get a blow in the neck with the 0:1, but the team fought back extremely well. In the end we just have to finish it cleverly, so we grossly negligently ignored three or four switchover situations.”

Klaus Schmidt (Hartberg coach): “The Watten team deserved a win despite a lead that we were very, very fortunate to achieve. We didn’t even calm the game down from our lead and wanted to get through the break somehow. Unfortunately, that didn’t work. Then we got the goal in the 47th minute, exactly at a time when we were already preparing for a talk during the break. That was a tailwind for Wattens, for us it was a stomach ache. If we had done an X it would have been very, very happy.”

See also  "I hit 300 and was the one who got the MOST BASE but NOBODY remembers that", CONFESSED Cuban big leagues – SwingCompleto