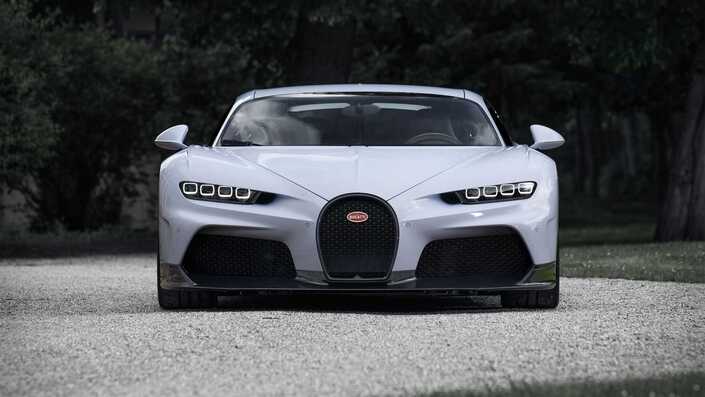 Do you remember the Veyron Super Sport, that radical and extreme variant of Bugatti’s previous supercar, which produced only around 40 copies? Today, the French brand is doing the trick again on the Chiron.

This magnificent creation, presented in a sumptuous gray livery with beige interior, adopts a large number of specificities. Aerodynamics, first, with gills in the sides, a lowered front and above all a stern lengthened by 25 cm (!) To provide stability.

At the rear, again, the tailpipes have been repositioned and the diffuser redesigned to reduce wind resistance and improve top speed. The goal is clearly not to have a lot of support, but rather to slip through the air.

The most observant will have noticed these small gills on the wings, like a reminder to the EB 110 Super Sport. Beyond the visual and historical aspect, they also serve to reduce the air pressure in the wheel arches.

Bugatti engineers have put all their expertise to extract the best juice from the W16 8.0, which for the occasion goes from 1,500 to 1,600 hp (larger turbos, new oil pump and valve lifters, in particular). The torque remains unchanged, at 1600 Nm, but it is available over a wider range (between 2000 and 7000 rpm, which is colossal).

The numbers are impressive: 0 to 200 in 5.8 seconds, 0 to 300 in 12.1 seconds, and shifting from sixth to seventh gear at … 403 km / h. Let’s not forget to point out that the Chiron Super Sport lost 23 kg in the process compared to a Chiron Sport. You’re now expecting a crazy price, and you’re hitting the mark. The unit price is set at 3.2 million euros, excluding taxes, and excluding options (let us mention, for example, ultralight magnesium rims …).

READ  Is another DeFi summer coming?