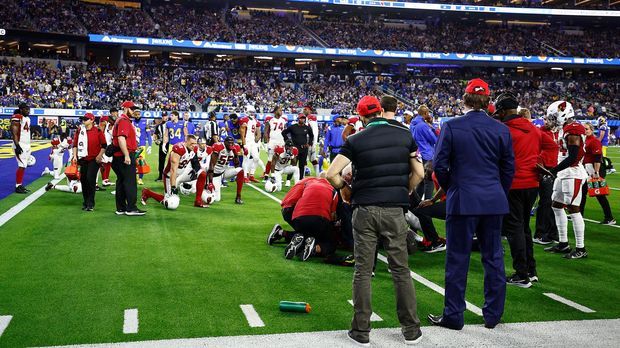 Los Angeles/Munich – The Arizona Cardinals are worried about their star safety Budda Baker after the playoff loss to the Los Angeles Rams.

The 26-year-old pass defender collided with Rams running back Cam Akers just before the end of the third quarter and then lay motionless on the ground. Akers, who was running towards the end zone at high speed, hit his shoulder against Baker’s bowed head, who hit the artificial turf unhappily to make matters worse.

Update: Baker has since left the hospital

As the Cardinals officially announced, Baker has since left the hospital. The Cards tweeted a picture of Baker making his way home to Arizona.

He was cleared by the physicians there, released this morning and is on his way back to Arizona. pic.twitter.com/GIt1s8k24l

Baker reports from the hospital

The veteran was treated immediately by the team doctors, and after a lengthy treatment break, the 26-year-old was finally carried off the field on a stretcher.

As the Cardinals announced a little later, Baker was conscious and was able to move his arms and legs. The safety was taken to a hospital for a detailed examination.

From there he has meanwhile spoken up via Twitter and let his fans know that everything is fine so far. “Thank you for all the prayers. I’m fine,” he wrote. An official diagnosis is still pending.

See also  An end to forget, to a Hall of Fame career

Baker had four tackles before his injury. A few weeks ago, the veteran was elected to the Pro Bowl for his excellent performance.