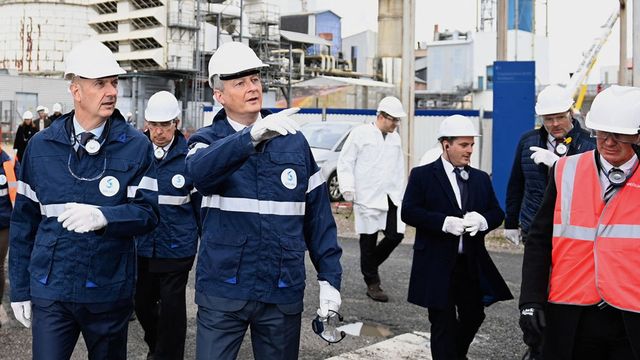 While in a week, the deputies will vote on the first major “green” law of the five-year term – the one aimed at accelerating the deployment of renewable energies – the Minister of the Economy is already considering the rest. This Wednesday on France Inter, Bruno Le Maire said he wanted to “carry out a green industry bill”, which he will discuss with the Prime Minister and the President of the Republic “in the coming days”.

This text, which Bercy wishes to present in the spring, will contain a set of provisions to accelerate the construction of industrial sites on French territory and “encourage the decarbonization of industry”, indicated Bruno Le Maire, who also wants to “better train , better qualify”.

“The reindustrialization of the country requires the greening of our traditional industries and the development of new green industries: hydrogen, photovoltaics for example”, can we read in a preparatory document from the Ministry of the Economy. Three axes are defined there.

The first consists of “strengthening the attractiveness of France, via regulations, taxation, the mobilization of private financing (savings)”. This objective is not new and has notably taken the form of a significant reduction in taxes in recent years. In 2023, the contribution on the added value of companies will also be halved before disappearing completely in 2024.

On France Inter, Bruno Le Maire also insisted on the need to “shorten the deadlines, simplify the procedures”. An objective which refers to the conclusions of the report submitted in March by Laurent Guillot (ex-director of Saint-Gobain), which pointed to the slowness of the instruction of the files to be able to open a factory.

The second axis is to “promote French production and European production”. Finally, Bercy wants to “prepare skills for green industry” and in particular ensure that the industrial sector attracts more women.

Replicate in the United States

In addition to climate change and the effects of the war in Ukraine, the backdrop of the future bill is that of competition with the United States.

“To weigh in international competition, we must be the pioneers and champions of low-carbon industry; the United States made no mistake about it with the IRA”, underlines the Bercy document.

Bruno Le Maire and his German counterpart have been discussing for months a European response to the “Inflation Reduction Act”, this law carried by Joe Biden and passed last summer in the United States to promote the relocation of factories. on American territory (in particular for electric vehicles or solar panels) with large amounts of subsidies.

The tenant of Bercy pleaded this Wednesday for “greater, simplified, faster state aid, for those who want to locate their green industry at European level”. In December, a “Franco-German contribution” to this effect was sent to the European Commission. Paris and Berlin would like Brussels to take measures in response to the growing protectionism of the United States.

Concerning the French bill, Bercy intends to initiate “a broad work of consultation of companies and all stakeholders, everywhere in France”. The method must be based on that of the design of the Pacte law (for the growth and transformation of businesses) of 2019.