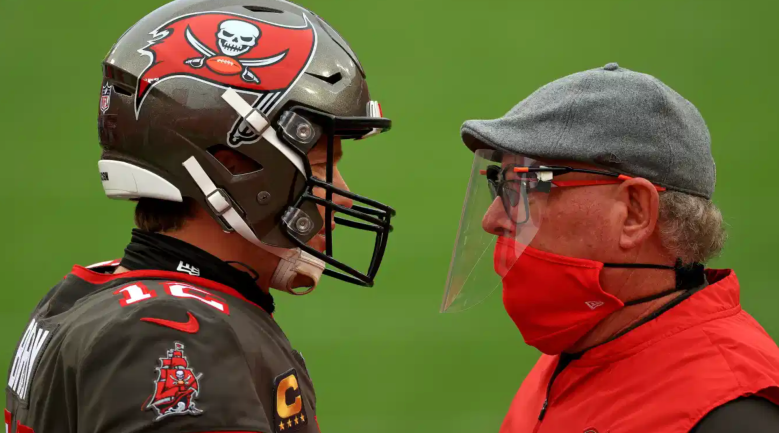 Bruce Arians and his secret to Tom Brady

The coach of the Tampa Bay Buccaneers, Bruce Arians, managed to keep public information secret from everyone except Tom Brady.

Arians did not want his team to know the outcome of last Sunday’s game between the 49ers and the Rams, as it had affected the final ranking of the Bucs in the playoffs. Tampa Bay played their game at the same time and beat the Carolina Panthers 41 to 17. Then the 49ers turned the game around against the Rams in overtime, and that allowed the Bucs to secure the No. NFC.

“I knew what was happening. We kept him off the scoreboard for a reason, so the players wouldn’t see him. He would whisper it to Tom every so often, ”Arians told the media. “I really wanted to get him out of the game.”

Brady didn’t exit the game until the fourth quarter, when the Bucs walked away after 24 points in the fourth. Players, coaches and fans stayed at Raymond James Stadium after the game to watch the 49ers take the lead over the Rams in overtime with a field goal.

At the time, Brady said he didn’t want to get in trouble for qualifying.

“The important thing is how you play, not where you play. On the other hand, whatever the classification is. We will go out to play no matter where it is, ”Brady said. “Our first game is at home. We have to win that game first. “

But not before sending his regards to his family on TV.

“I just want to say hello to my parents, my wife who is in Costa Rica with my children, my son Jack is in New York, and everyone who is out there. All my family. I love you, and will see you all next week.

Brady and the Bucs will play the City of Brotherly Love team, the Philadelphia Eagles – the last team in the NFC to beat a Brady team in the playoffs. The Bucs and Eagles will play on Sunday, January 16, at one in the afternoon.

Schedule is out — Bucs will host the Eagles at 1 p.m. Sunday in the wild-card weekend.

Brady: ‘I wouldn’t have cared if the Rams won’

Brady said “getting second in the NFC was a great achievement” when speaking to the media. However, he said he was not concerned about what was being seen on the giant screen.

“I would have given the same if the Rams won. It would have been nice, ”Brady said. “You can’t control what happens with other teams.”

“We have to play the Eagles, and that will be our biggest game of the season. And if we win – it doesn’t matter who or where, we’ll still play our way, ”Brady said.

Arians wasn’t very effusive about breaking the Bucs’ record for wins in the regular season with 13 wins.

“Thirteen wins, it hasn’t been easy at all,” Arians told the media. “We have dealt with a lot of injuries this season.”

The Bucs had to deal with a host of injuries in the secondary and key players on offense. Arians believes the injury problem will be resolved in time for the playoffs.

“Hopefully we’ll have almost the entire defense back by next week,” Arians said. “I’m sure Lenny (Fournette) will be ready too.”
Follow Now Same on Instagram

READ THE ORIGINAL NEWS ON HEAVY.COM