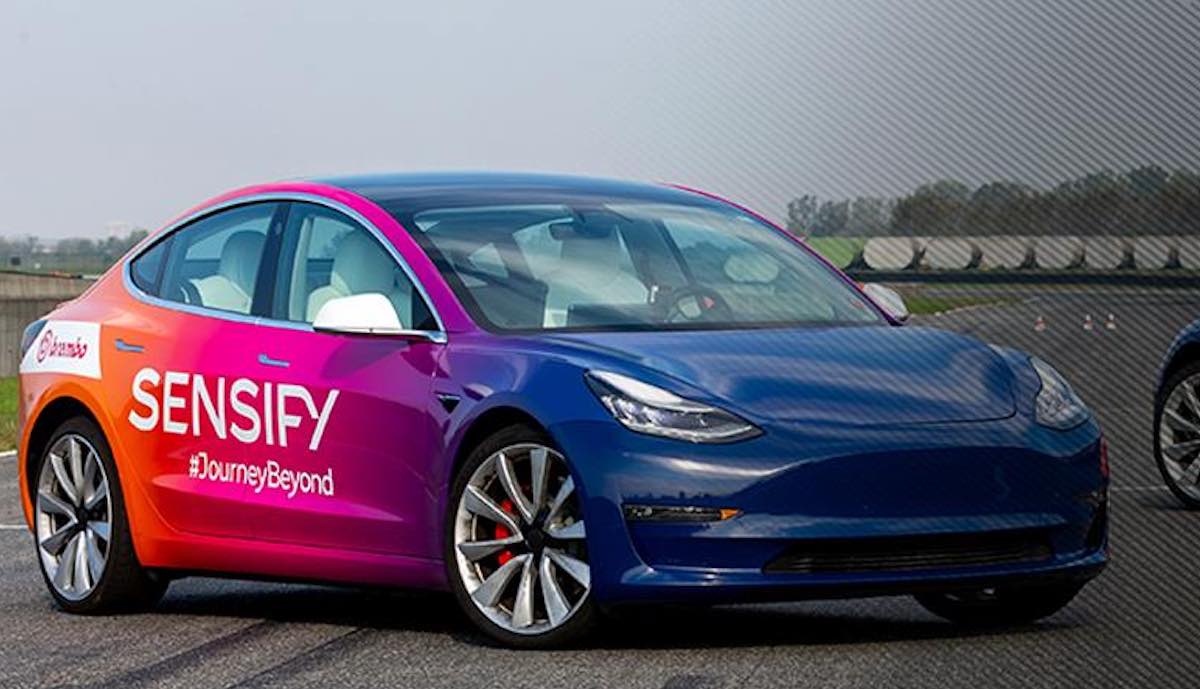 Although electric cars can also use their motors to decelerate properly and even recover electricity in the process, even Tesla has not dared to omit the mechanical brake so far. However, the Italian specialist Brembo is working on developing something like the counterpart to a wheel hub motor ready for series production, just for braking. One blog was able to try out the system at the current stage in a Tesla Model 3 Performance and was very impressed with it.

When Brembo presented its Sensify concept last October, the announcement was illustrated, among other things, by an old Tesla Model S in colored foil with this name. This shows how long the company has been working on it. According to an Autoblog report, it’s actually been ten years. In two more years, the system should be found in the first electric cars. According to Brembo, it is currently speaking to several manufacturers, but does not name any names.

In any case, for a demonstration by Sensify at the end of July, the company chose a Tesla Model 3 (see photo above), as AutoMK reports – in the performance version with the track mode in which you can deactivate digital safety assistants. That is supposed to be one of the advantages of the Brembo system: you don’t need any additional ABS or electronic brake force distribution because these functions are already integrated. This is helped by the fact that the deceleration can be controlled individually at each wheel – just like wheel hub motors drive individual wheels.

For this finer control, Brembo uses either four electrically operated calipers all around instead of a central hydraulic system. In this case, the brake pedal becomes a pure electronic controller. In this configuration, only an additional power supply should serve as a backup. Alternatively, according to the AutoMK report, there is a hybrid solution. The rear is then also braked electromechanically and the front hydraulically, but with one cylinder per side and thus still individually adjustable pressure. This has the advantage that one of the disadvantages of wheel hub motors – and also brake motors on the wheel – is partially avoided: more unsprung mass.

Sporty electric cars should therefore be given the hybrid configuration that Brembo also chose for the test with the performance Tesla. Any stops with it were almost leisurely, AutoMK reports. The typical ABS stuttering did not occur when the brakes were applied straight ahead, nor did any swerving, even on wet roads. According to the report, the Model 3 also copes well with its own ABS when the brakes are pressed in the middle of a curve. With the Sensify system, however, the car was not even disturbed when the testers jerked the steering wheel back and forth. On the third manoeuvre, left-right steering while braking from high speed, the new Brembo system was also better for them.

This is nothing less than a “small revolution,” writes the blog. In addition to more safety and less hydraulic complexity, the system should also offer efficiency advantages: reduced wear through more targeted braking and the fact that the brake pads are electromechanically kept completely away from the disc mean less wear, according to Brembo. In addition, the electromechanical calipers should last the entire life of the car. However, following a clear trend in electric cars, Brembo wants to give its product the ability to be updated later by radio and thus be able to keep in touch with customers – paid for if necessary.